The body as artistic form and physical marvel capable of the transcendent stood centrestage in Sydney Dance Company’s 50th Anniversary Triple Bill, Bonachela/Nankivell/Lane. The company’s standard elite athleticism, vigor, dynamism, and fervent technical prowess, as well as spotlight on the human, shone bright on opening night, with the State Premier in attendance.

There’s so much to love about the artists performing and the choreographers designing each work. All long term, high-level practitioners in the form, and evolving at similar or adjacent eras, the concerns and styles on display inhabited a common territory – it was all about the body. Diverse, individual styles pushed the limits of movement but all had a robust physicality uniquely local to our parts, an Australian aesthetic which often pits physical animation as a core component of the person.

Damien Cooper’s particular lighting style for the first two works added to an otherworldly feel with eerie haze effects shot through with neon rays creating energised spaces in which these creatures mark their territory. His harsh flood lighting of stage then audience, and the liminal terrain between the two, is excitingly challenging and reframes the space the dancers whirl within. Whimsically romantic post-modern costuming from Harriet Oxley and Bianca Spender decorates these noble souls in cascading, twisting chiffon and fine, light fabric, draping and framing the sacred in the body’s own design and its movement.

Nankivell’s Neon Aether presented humanity as a networked organic beast with body parts and people interlinking in the same way DNA does inside each of us. No one is isolated from its pack or group. Her shapes were delicate and designed, presenting moments of transcendent beauty, redolent of ancient movement rituals, such as those of the dead and the living conducted at sites like Stonehenge, where people move in and out of circles or configurations, always facing the tribe. Luke Smiles sound design is thrilling and discomforting, with industrial and war-like animations. 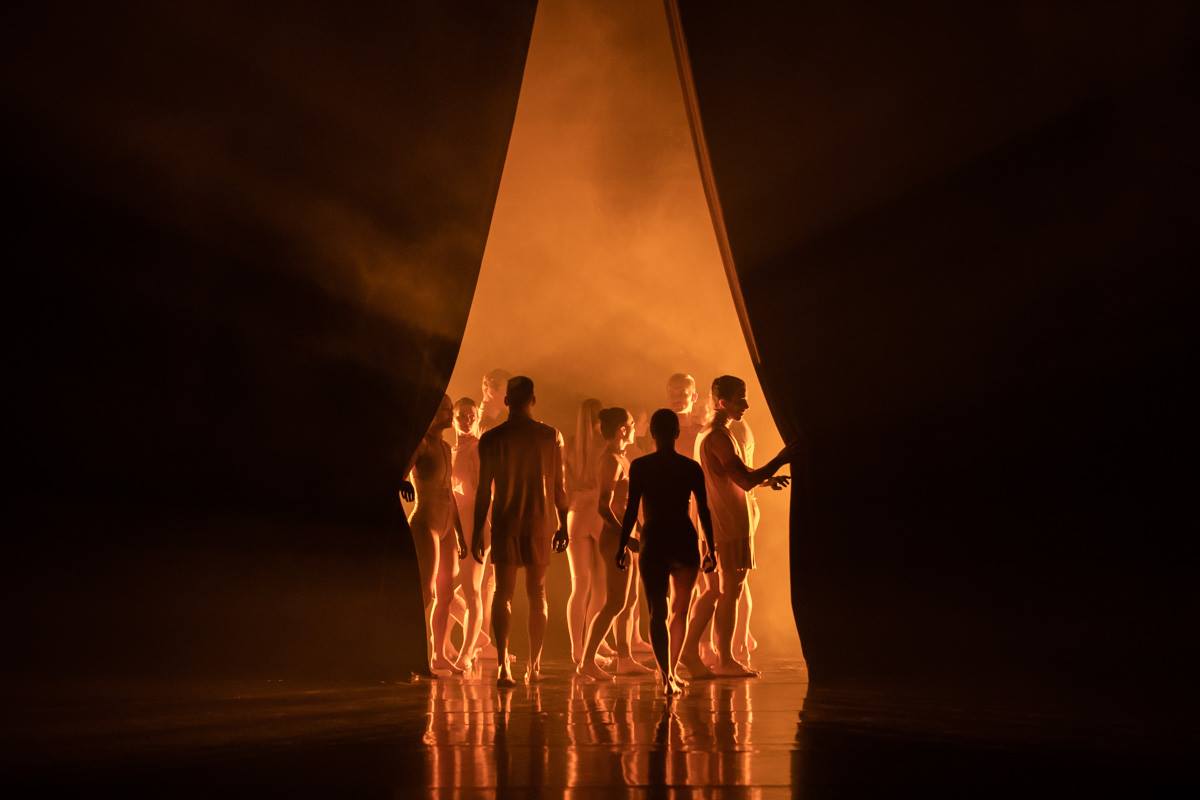 Bonachela’s signature fascinations were on show in Cinco, a work with five dancers based on the pentagon through mathematical approaches, to music from Alberto Ginastera (String Quartet No2. Op.26) . Caught by our eyes in moments of flashlit gladiatorial competition, resembling the iconic, ritualised posturing more familiar to us from a classical context, much of the movement signification was statuesque and signatory. These were god like creatures who flung themselves across broad spaces, or who flew through the air on high as if agents from another realm, animating spirit made visual through the flesh in motion.

His marvellous way of blasting out the rectangular box feel of the stage space, bringing a circular, centring space as a hub where being exists, with cast emanating from the periphery, off stage, alternate angles, flowing in and out form downstage and upstage, in a non-linear fashion was an exciting as ever to experience. His dancers create a fluid space on which they converge and his works are ungendered representations of our species’ craving for energy.

A master craftsman, and head of SDC since 2009, Bonachela reframes the body in dance. His moves push its body to extremes, reminiscent of contortion or display, but with musicality and narrative driving it,  and inverts and reinscribes the language of movement written through the body. He fractures the traditional dance paradigm of the upright, turned out, forward-facing balletic dancer, allowing forms to mutate, reconfigure, fold in opposites and, as with other Australian choreographers of his generation like Philip Adams, he segregates and explores planes on the form, allowing different parts to speak differently to other parts in one movement phrase, for example, the front part turned out, the back legs inverted into parallel, head lowered.

The body is absolved of its subjectivity but at the mercy of line and diagrammatics – and the choreographer’s intent.

I did not go to the theatre expecting to fall in love but was captured by Ariella Casu’s expressive humanity within her artistry in Neon Aether. She animated each moment, heartbeat and bodily articulation with the depth of a seasoned practitioner and was highly watchable. Cinco elevated athleticism in the performance zone to another level with Yasmine Yap, Holly Doyle, Jesse Scales and Spain’s Victor Zarallo notables who unified a mass of elements comprehensively within their personal depictions.

There is more than just technique on show here, the esprit of the danseur rises. The cast are each superb and you can spend your time finding and following a favourite, going on an observational journey with them in every movement or pause.

There is lush workmanship and execution on display throughout the entire show. Its presentation and pace is unrelenting. You will go to see it to marvel at these consummate professionals, serious choreographers, and a national company which nurtures and supports dance as a profession, and more than this, as an intelligent interrogation of what it means to be human.

A brief 5 show season, this is a company whose work is not to be missed.

See National Tour dates with Victorian stops in Warragul, Frankston, Bendigo, and Mildura, or sign up for a workshop Masterclass.

Disclosure: The Plus Ones were guests of Sydney Dance Company.