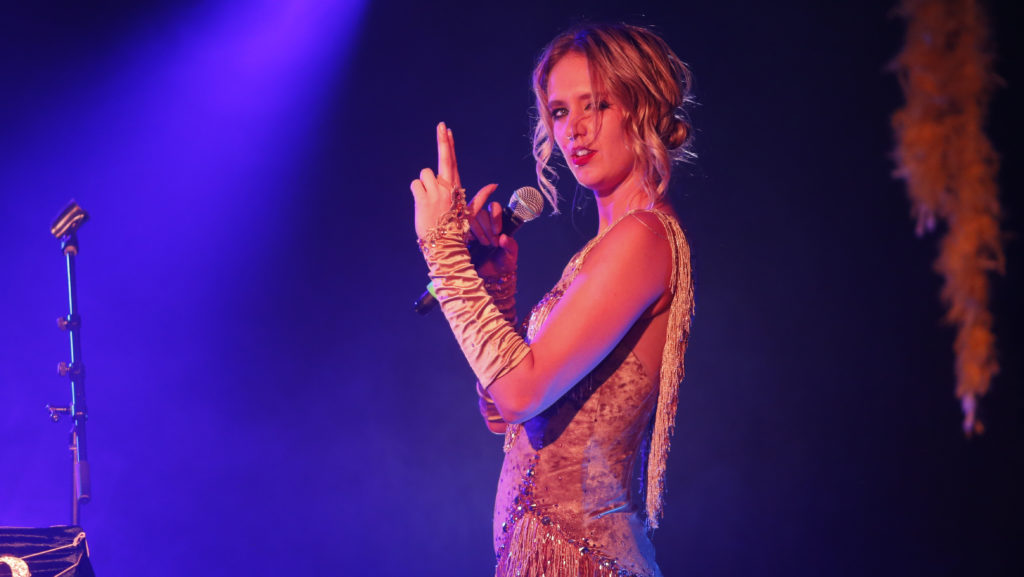 Rumours of cabaret superstar Anya Anastasia retiring have been dispelled, if not postponed, as she brings The Show to the MICF. Sometimes superstar means earning innumerable five-star reviews, and not the kind of fame that comes with fortune. Anya has to pay bills, and enough is enough. This is an announcement that she is quitting cabaret to seek more lucrative employment… by writing a whole new amazing and original cabaret.

Anya skills are astounding if niche. Ten years of writing, performing and touring cabaret internationally (with the goal of effecting social change) is not an easy sell if you are looking for an office job. With a ‘Cabaret Start for Hire’ sign draped across her keyboard, her baggage is evident – a giant disco ball and chain shackled to her ankle shows that this transition to another career will not be easy.

What follows is an extraordinarily packed hour of performance. A comedy performance that doubles as a musical resume, Anya expertly performs musical theatre to if only to demonstrate how much she dislikes it. She proves she can write songs for a Disney movie, though “Existential Crisis: The Musical” might have a very narrow audience and give studio executives pause. Life lessons are shared in the ballad “Never give up on your dreams and other terrible pieces of advice”.

The second half of the performance takes a an unexpected (and hilarious) turn to physical comedy, which I’ve never seen Anya do before (and I love it). A comic spy-thriller denouement where agent Anya (codename Scary Canary) is sent by ASIO on an international mission that manages to blend Donald Trump, Rupert Murdoch, James Bond, awkward sex and unusual phobias.

Having seen her move from playing characters, her sultry diva alter ego, and tackling the big political and social issues – this might be her best show yet. It is the most personal, an honest and at times raw glimpse of the true Anya that bares all figuratively (she remains adamant that she doesn’t strip or does burlesque… a half-truth you have to judge for yourself).

Behind the magnetic onstage personality, the dazzling virtuoso singing and writing, she touches us with the pathos of someone who has genuinely struggled with following her dreams and the realities of failure. There is a moral lesson in it too – that setting the bar really low, or redefining what success means to you is a way to reframe expectations and keep moving forward.

From the perspective of a fan, part of success is in the eye of the beholder. Anya Anastasia is an outstanding cabaret performer, and one you should see at any opportunity. It is the type of show I’d come out of, buy another ticket and watch it all over again with unabated fanboy fervour.

– Christian G.
Christian is an international man of mystery; lover of books, cats, and the performing arts; moonlighting as a finance professional by day.