What does it feel like to be human in 2017? Does anything we do make a difference? Who can find time for yoga, riding a bike to work, and keeping up with social media — and what is happening in the Middle East? Can cabaret provide an answer? The Plus Ones’ darling Anya Anastasia takes a break from preparing for her U.K. tour (the video is priceless!) to tackle this and more in The Execution.

A deliberate departure from confetti cannons, extravagant props, and devilish costumes, Anya strips down to essentials: the husky voice, biting wit, magnetic presence — and an artistic vision of taking a stand for what she believes in.

This is raw, rough and experimental cabaret. True to her stage name, there is a veneer of Slavic themes. From the moment she strolls on stage accompanied by an accordion, to snippets of Rachmaninov — there are subtle nods to political and countercultural message of much of the theatre to come out of 20th-century Eastern Europe.

Meanwhile, lyrics and music focus on the zeitgeist of our times. Current affairs. Facebook.  Penalty Rates. Champagne breakfasts. In itself nothing new — plenty of theatre and cabaret in the Melbourne today poke fun at modern life and our travails. The fact that Anya can write beautiful, catchy music and deliver it with a style that is mesmerizing, would be enough for her to stand out and captivate. But Anya won’t settle for wit and melody alone. 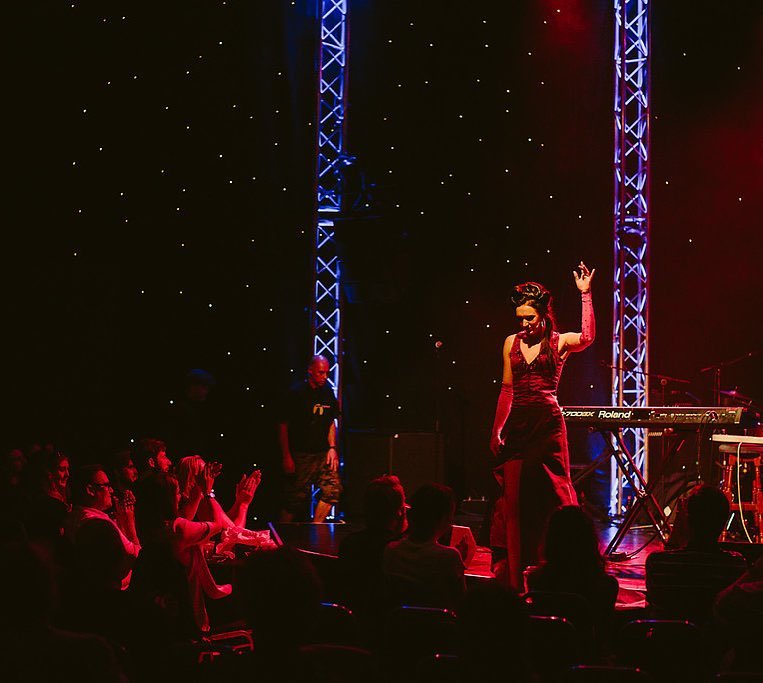 One of her music teachers said, ‘You could be a pop superstar if you weren’t so weird’.  During the show, in another telling moment of confession or frustration, Anya confides that she is tired of being asked to write pop songs and music that can make us feel better. Her brand of cabaret is one that is not easy to sell. She is not here just to sing and act. She wants to rattle the cages, create cabaret that is cutting edge and dangerous.  An instrument to craft a version of the world she believes in.

Rather than just delivering ideas and opinions, Anya engages the audience in a dialogue – she invites us to share what is important, and what concerns us.  She doesn’t have answers, but wants to engage in a conversation where we debate and figure it out together.

It is the originality of the experimentation of form that stand out. Anya asked me to stand in as director a few times, provide feedback and direction to certain scenes, along with input from others around me. Other times she blends in the whimsical with immediate, something that is characteristic of her work.  One short-but-sweet scene saw her precariously perched on top of a bar stool, legs crossed in the lotus position, Sitar music setting the yoga session scene – until a cacophony of SMS, social media, and news alerts kill any hope of serene mindfulness. It is funny, charming, and almost lyrical. Props also to the brilliant if discrete work from her mostly mute musician and comic counterpoint Gareth Chin.

Spending an hour with Anya, witnessing her experiment and improvise with form and content in an intimate and collaborative setting, is a treat. While not the extravagant larger-than-life characters and spectacles she’s brought to stage and made her devoted fans (her pop cabaret, if you will, Anya), it’s also not the point.  To me, it feels like being invited to spend some time with a favourite artist in a studio session, creating some fresh, original and asking you for your opinion.

Anya Anastasia’s The Execution runs 27 June–2 July 2017 at The Butterfly Club. Buy tickets now. The venue is not accessible.

Pledge to her Pozible campaign to help send her to Edinburgh.

Disclosure: The Plus Ones were invited guests of The Butterfly Club.
Image credit: Anya Anastasia and Kate Pardey.

Seouljaboy – get a Korean food fix in the CBD