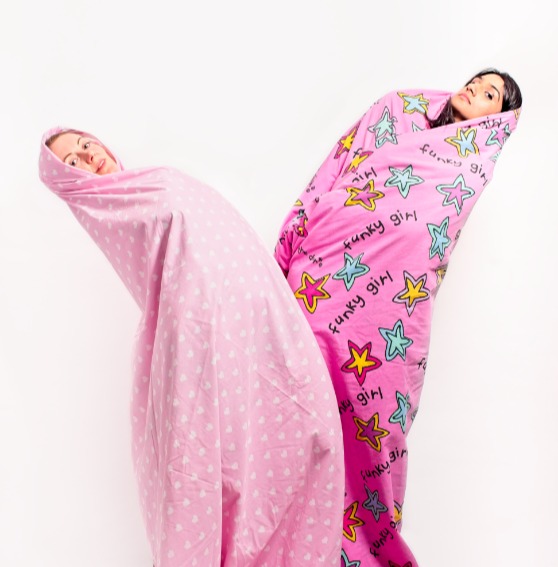 Fringe performances have been known to experiment with interesting spaces as part of creating quirky atmospheres. Some have been set in car parks, some in swimming pools, and some even use the city blocks of Melbourne as a roving setting. ‘Sleepover Gurlz‘ takes place in a bedroom, in a north Melbourne suburb, following two friends hosting a sleepover party at different stages of their life. The space is small, but the heart, resourcefulness, and overall atmosphere of the performance strikes large and true.

This is a delicately crafted and intensely presented show that manages to strike an incredible balance between reflective comedy and harder-hitting darker themed material. The audience are invited to sit around the double bed, the main stage for the evening, and even become endowed as the returning sleepover guests. It is an intimate space, creating both a strongly participatory environment and an inescapable sense of being drawn into the fold.

A poorly written or presented piece could spell a recipe for awkwardness, but all of the creatives involved, with boding soundscapes and strongly engaging blends of character strengths and physical ingenuity, produce an immersive hour of theatre that leaves the audience both entertained, reflective, and successfully unsettled.

Vidya Rajan plays the protagonist, and vessel to the audience in the moments of internal struggle, encapsulating the many layers of her character’s journey with an established hold on creating variety within her performance. Emma Smith radiates with energy and characterisation as she switches from her main character to representations of others, producing an adept complimentary presence with superb facial and physical animation. Xanthea O’Connor is there to greet the guests, and is control of all the audio and video magic that transforms the bedroom into a true performance area.

This is an ingeniously creative and bold piece that showcases a lot of thought and dedication towards the art of immersive theatre. There are great things to come from the talents of this ensemble.

Sleepover Gurlz ran during the Melbourne Fringe Festival from the 13th to the 23rd of September.

Disclosure: The Plus Ones were invited guests of Vidya Rajan.

Eggsistentialism at the Melbourne Fringe 2018