Roll up to Richmond to see some of the 21st century’s most loathsome men tread the boards. Who would have thought you could see such infamous characters within metro Melbourne? After many struggles to get this show up, Globe Players present  Geli- Hitler’s Niece, the illicit tale of a wrongful scandalous love on a spacious, traditional stage.  It’s evocative of the stages the early career public-speaking Hitler would himself have trod, raised on high.

With a cast list of names that send chills down the spine of anyone with any recall WWII Europe, the show includes Matthew Richard Walsh as Adolf Hitler, Jonathon Harris as Heinrich Himmler, and Ben Byrne as Joseph Goebbels, and foregrounds the scheming background Party machinations that determine for our leading man just which woman will be his sanctioned consort. 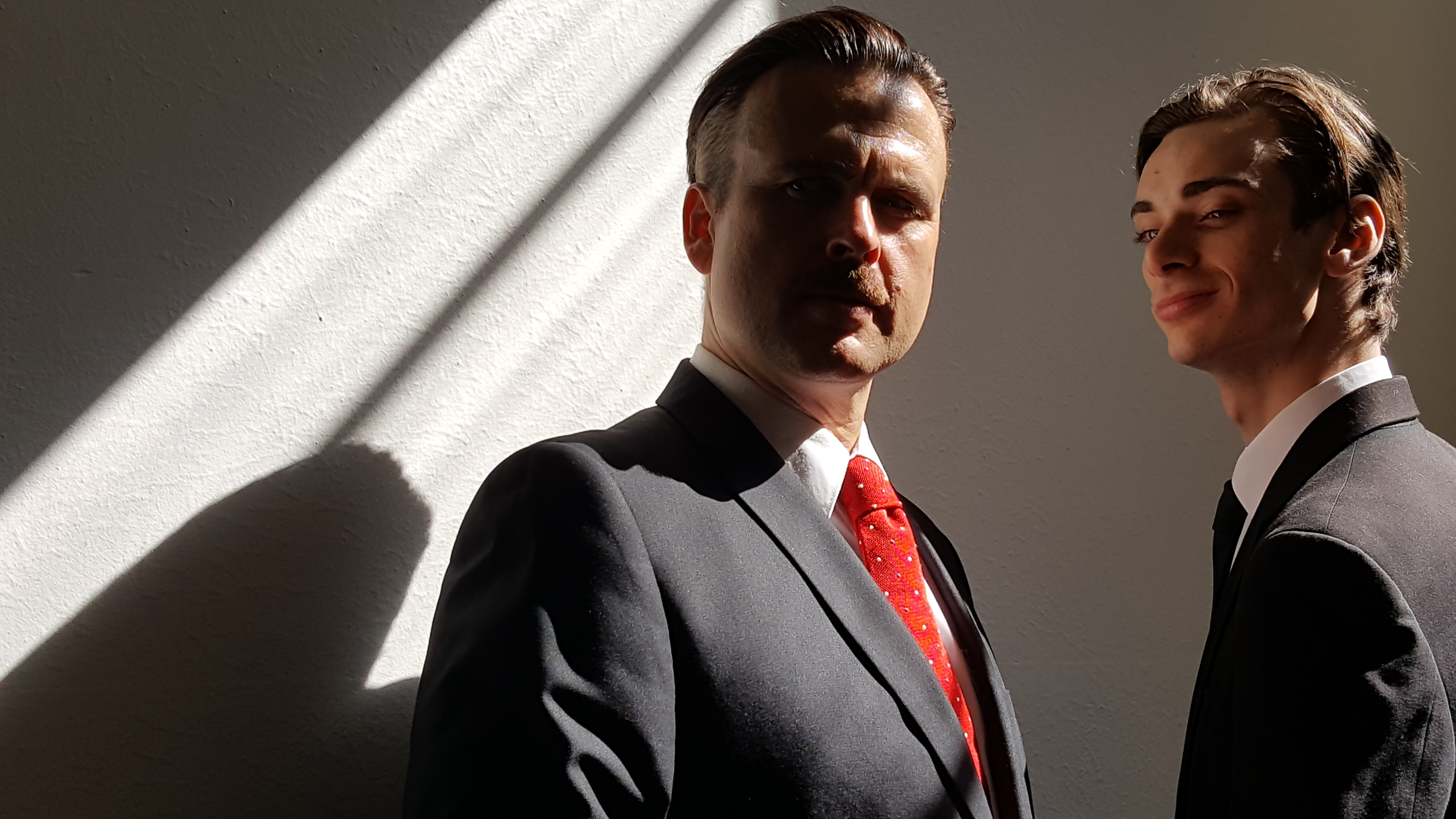 Matthew Richard Walsh as Hitler and Jonathon Harris as Himmler

This world premiere of loved Melbourne playwright, Enzo Condello, a Shakespeare and classical literature fan, is directed by Wolf Heidecker, a German theatre producer of many decades, and is a well staged play that tells a story. Scenes move briskly and the performances are energised. The direction allows the story to move on linearly, with the chronological details resulting in evenutal tragedy.

The title alone compels- or repels, inviting controversy. We think we collectively know all about The Fuhrer’s private romantic life, with Eva Braun, vivaciously portrayed by Simone Bergamin. But the notoriously flawed nature of his personal relationships is here clearly outlined, close to the commencement of the Final Solution. To modern audiences, his idealisation of virginal innocence contrasted by scheming womanhood seem archaic, as if from ancient Greek tragedy, or the Bible, and Condello regularly throws these into contrast.

We glean interesting trivia from this show, facts that will stun and tell so much. About Adolf’s artistic side, Geli’s intellectual interests and successful medical studies at university, about their deeper spiritual connection but also point an illicit connection. Rumours fly about this union and its nature but there is little evidence to prove or disprove them. The text has several wonderful lines – evil is a necessary evil- which Geli and Hitler debate. She pleads for a more humane view, but the play shows the external pressures applied on a man weak of personal character. 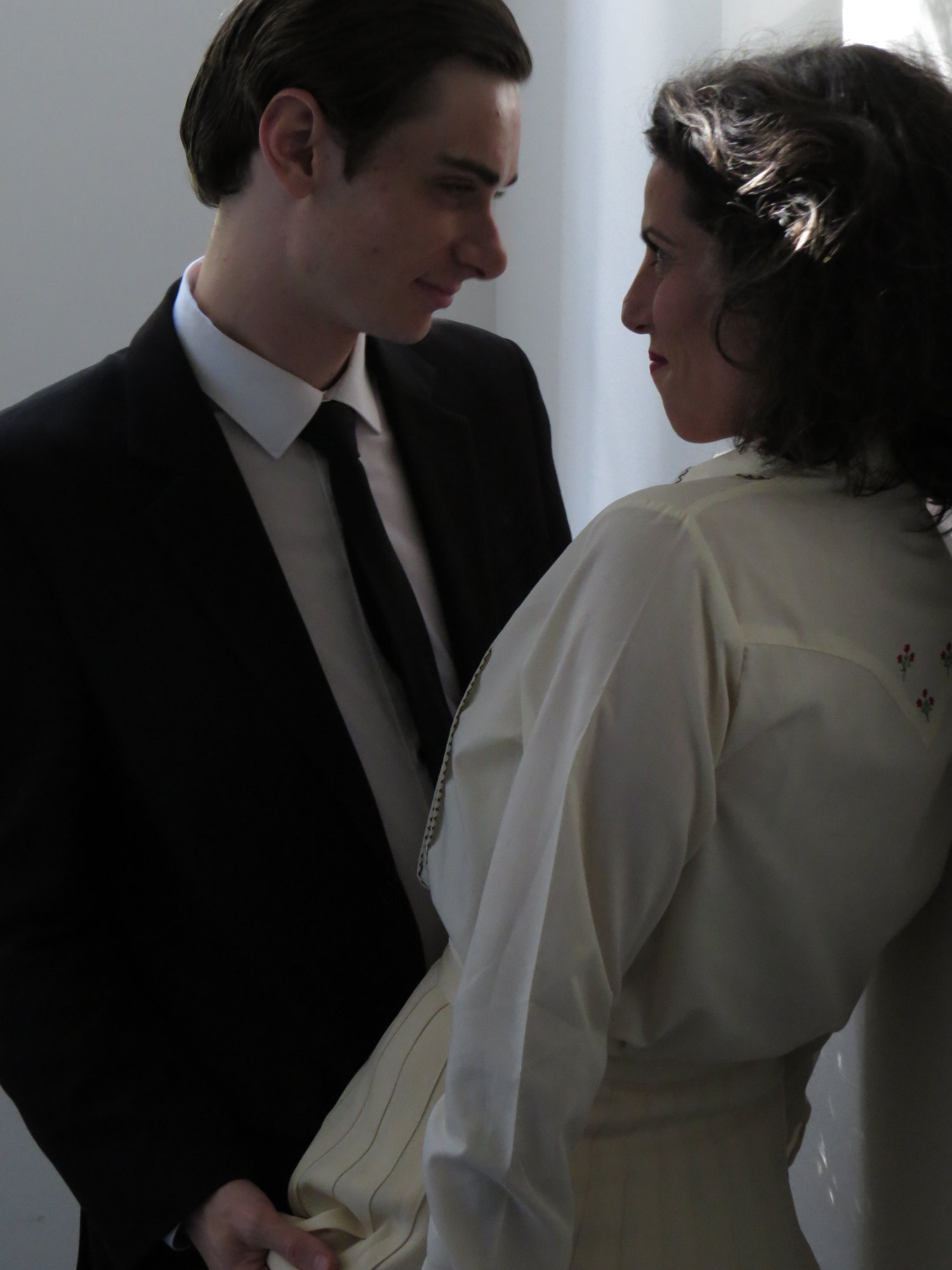 Jonathon Harris as Himmler and Simone Bergamin as Eva Braun

The play recounts the story of Geli masterfully. The daughter of Hitler’s half-sister, Angela Raubel, first lives with Hitler age 17, when her mother becomes his housekeeper. He is 19 years her senior. She later moves into his Munich apartment. Geli lost her father age two, so was, perhaps, seeking a substitute. She would spend the rest of her short life a virtual prisoner here, under his control. As he rose to power in the Nazi Party, his obsession with her grew. Her medical studies were disbanded. Hitler supervised her romantic choices, friendship circles, and ensured she was chaperoned by him or a staffer her on social excursions outside the flat.

In September 1931, the year in which this play is set, Geli planned to travel to Vienna as she had fallen in love with a poetic dramatist, Otto Strauss, of part-Jewish heritage. Hitler refused to allow her to go, and, after travelling to Nuremberg for meetings, discovered she had died of a gunshot wound on the 19th, inflicted by one of his own weapons. After her death, Hitler fell into depression, not attending her funeral. Geli was believed to be the only woman he ever truly loved. Her room at the Berghof house was kept as she had left it, and he hung portraits of her in his own room there and at the Chancellery in Berlin. 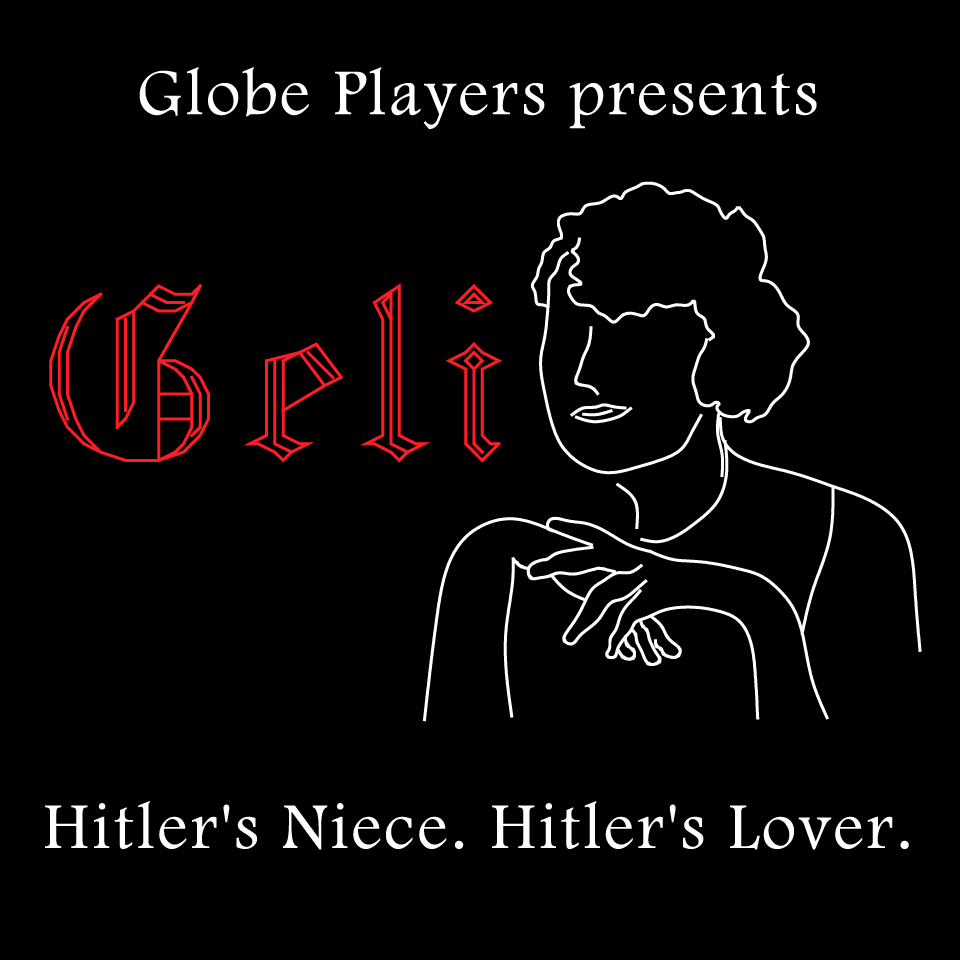 Walsh has a confident stage energy and holds focus as Adolf. He puts in an Herculean effort with his lines. He gets into the spirit of his fragile temperament, riven by insecurities and feelings of inadequacy, and shows his progress from simple suitor to enraged jealous paramour, easily manipulated by an offsider such as Himmler. Harris is a standoffish Himmler yet effectively conveys the interiority of this scheming Iago. Fittingly, he is tall and lean, with expressive facial features, and he makes the most of these, adding character.

Kelley Kerr Young is our 23 year old Geli Raubel and convincingly portrays both the independence of spirit and vulnerable infatuation of our youthful ingenue. We trace the arc of attachment, love, and later confused abuse Geli encounters with her Adolf. He is not just a despot publically and it is difficult viewing observing his personal tyranny. Her broad movements across the entire stage convey Geli’s emotional breadth, and her figure and dress the simple sensuality which perhaps inspired part of Hitler’s interest.  Caroline Ferguson Angela Raubel is a strong naturalistic actress, with a well-paced vocal treatment that carries far and delineates her character’s emotions. Simone Bergamin as Braun is gamin indeed and presents a flirting capriciousness that is very watchable. Her meeting at Hitler’s apartment and Geli’s subsequent death leaves us with an questions of influence and we are unsure of the writer’s artistic licence.

The high energy and keen determination of this cast are limited by the under-developed writing. The play is unworked in parts,  at times copying Shakespeare as clumsy parody, or jumping genres mid-scene, even speech patterns. Colloquial Australianisms jarr, as does the emphatic chauvinism inherent throughout when it speaks of women. It’s sentiments are good but it lacks that attention required to tie an overarching narrative and thematic vision together, and delivers, at times, like a platitude.

A play with a titular female lead devolves into a fascination with a male identity but a outline sketch of this dramatic figure is not sufficient because of the weight of history his name carries. It could have meditated more on Geli herself, the role of women at this time, in Germany, and as independent, unmarried persons. It felt like a play about Hitler, not Geli. A story such as this could delve further into psychological darkness of the feminine in relation to Hitler’s public self, which the set, lighting and direction get spot on. 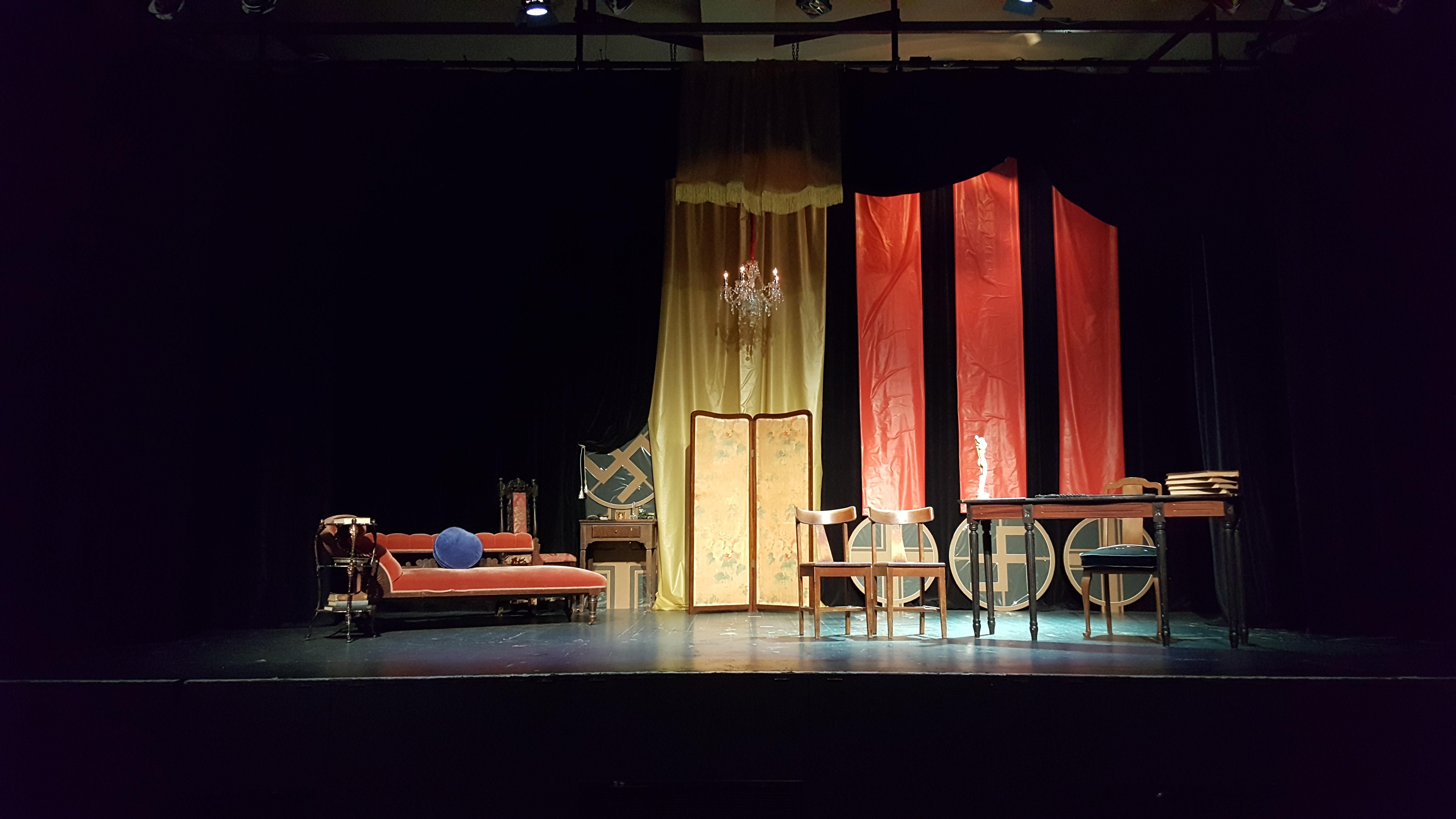 Sets and artwork by Sarah Yeung are exemplary, evoking the decadent beauty of 1931 German interior design, with heavy wood furniture, velvet surfaces, giant drapes cascading linearly down walls as emblematic pillars, and, of course, the Nazi Party’s maligned swastika symbol, here presented as the shields Party members would display at public rallies. Seated in the audience, you do feel as if you could be someone from the street presenting at an early Nazi Party speech. Stage lighting makes much of shadows in this work, told emphatically in a murky, darkened tone. It is a Freudian dark space.

Costume design by Nicole Komalarajan is theatrical, sensitive, and restrained, much like the era itself. The male characters sport a fantastic militaristic serge suit, with long, thick red pin stripes down the sides (symbolic of the cost of bloodletting to form the German Fatherland). These pants have an historical look, ballooning out at the thigh like riding pants. Heavy, workmanlike black leather shoes connote the militia. The women’s tops, skirts, throws, dresses and shoes are thoroughly authentic, with the right colour tone of muted fawn, naval blue, cream, or mustard. The rise of machine production in the early 20th century wasn’t just in the realm of army warfare – it also crossed over into fashion. Hair and makeup is delicate and supports the character’s age and style, as well as their various dramatic settings.

The play has all the ingredients for a knock-out work of theatre and does a good job of telling the story. See it if you are a history buff and to see this version of the private life of a very public historical figure.

Disclosure: The Plus Ones were guests of Cracked Actors.