The virtuoso violinist performs two Partitas and a Sonata, from Sei Solo by Bach.

On performance night in the Melbourne Recital Centre, Canadian-born James Ehnes strides onto the empty stage with his violin. For his Great Performers appearance, he will play a selection of Bach’s six-piece Sei Solo. With little ado, he begins. Any of the Sei Solo is difficult to perform live since the violinist is alone onstage. There is no room for error, and Ehnes is playing from memory. By the evening’s end, the exacting Melbourne audience will deliver a prolonged standing ovation. Ehnes with his Stradivari violin are mesmerising to see and hear.

J.S. Bach composed six works for solo violin, Sonatas and Partitas (BWV 1001–1006) which are a standard of violin repertory since the 18th century. To students and professional soloists alike, Sei Solo (Six Solos) are played for practice or performance. The set is effectively a polyphonic concert for unaccompanied violin, fiendishly difficult to do well. Ehnes’ interpretation of Bach is especially admired, in recording and live performance. See how, with the ‘Chaconne’ from Partita No. 2 in D Minor (BWV 1004) he accompanies himself, implying duets and multiple voices:

The 1715 ‘Marsick’ Stradivari violin has been exclusively used by Ehnes since 1999. On permanent loan from the Fulton Collection, the almost-pristine museum-quality artefact is valued at USD $8 million. It is an Old Master string instrument of remarkable versatility, as old as Bach’s Sei Solo. As to tone, the 300-year-old violin projects with vivid articulation and timbre warmth. Ehnes’ music simply shines within the confines of Elizabeth Murdoch Hall, an immense, immersive pleasure for this audience. 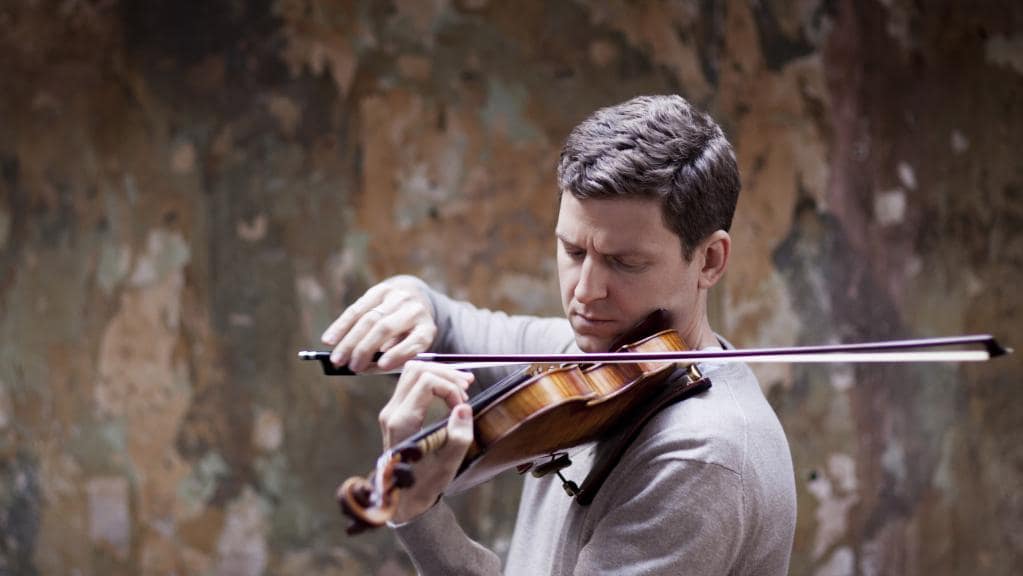 To exhibit the extent of tone versatility, as well as virtuosity of play, the recital program alternates two partitas and a sonata. Partita No.3 in E (BWV 1006) is a sprightly dance suite of seven parts. Its cheerful, polyphonic-lite sequence derives from French origin; Ehnes conveys soft and strong notes with astounding clarity. As a counterpart in mood and method, the dramatic, demanding Sonata No.3 in C (BWV 1005) follows. Four movements in the slow-fast-slow-fast tempo present challenges to the violinist. A harmony reminiscent of dotting is a prelude to a dense ‘Fuga.’ There is a soothing ‘Largo,’ followed by visually and aurally dazzling semiquavers of ‘Allegro assai.’

Ehnes’ performance ably tackles the complicated techniques required to create different voices for harmonic effect. Partita No.2 in D minor (BWV 1004) is another series of dances in conventional Baroque form, concluding the concert with its celebrated ‘Chaccone.’ In Bach’s time this section of 64 variations redefined what the violin was capable of doing. Darting his bow deftly across strings, Ehnes tests the limits of his Strad. The effect is of breathtaking intonations. So insistent is the applause which follows, Ehnes returns to the stage five times. Finally, he lifts his violin to his shoulder, smilingly saying, “I don’t know what could follow that.” Still, he plays an encore to calm the euphoric audience, a melancholic ‘Andante’ from Sonata No.2.

Ehnes unaccompanied is a commanding presence, for his virtousity is spellbinding. Bach solo violin does not get much better than this.

James Ehnes is in town until April 16. See Great Performers at the Melbourne Recital Centre, corner of Southbank Boulevard and Sturt Street.

Disclaimer: The Plus Ones were guests of Di Rolle on behalf of Melbourne Recital Centre.
Image credits: Benjamin Ealovega