He’s platinum blonde and all over our televisions. Trim, taut, and terrific, he has a mouth on him that knows no Mute. With the face of a cute boy child, he can charm anyone but has a sting in the tail that jumps out when you least expect it, which are the delights of his subversive agenda. An out gay comedian, his audacious commentary thrills his legion of devoted fans, cutting across all ages, gender and sexual preferences. Joel Creasey is a living Blonde Bombshell.

He has had a busy 2017 and is here to tell us about it. Last year saw him co-host the 62nd Eurovision(the gay Olympics), publish his first book Thirsty: Confessions of A Fame Whore, appear as regular on Channel 10’s The Project, become Team Captain on Show Me That Movie, and even make it onto Ramsay Street. He co-hosted this year’s SBS TV broadcast of The 2018 Mardi Gras parade. This show has all the charm he always offers – dick pics on his phone broadcast at Officeworks, the vagaries of performing at the Gold Coast, gay boyfriend rituals, illicit love affairs, international threesomes, and what he’s in it all for- fame, free shit, and hook ups. 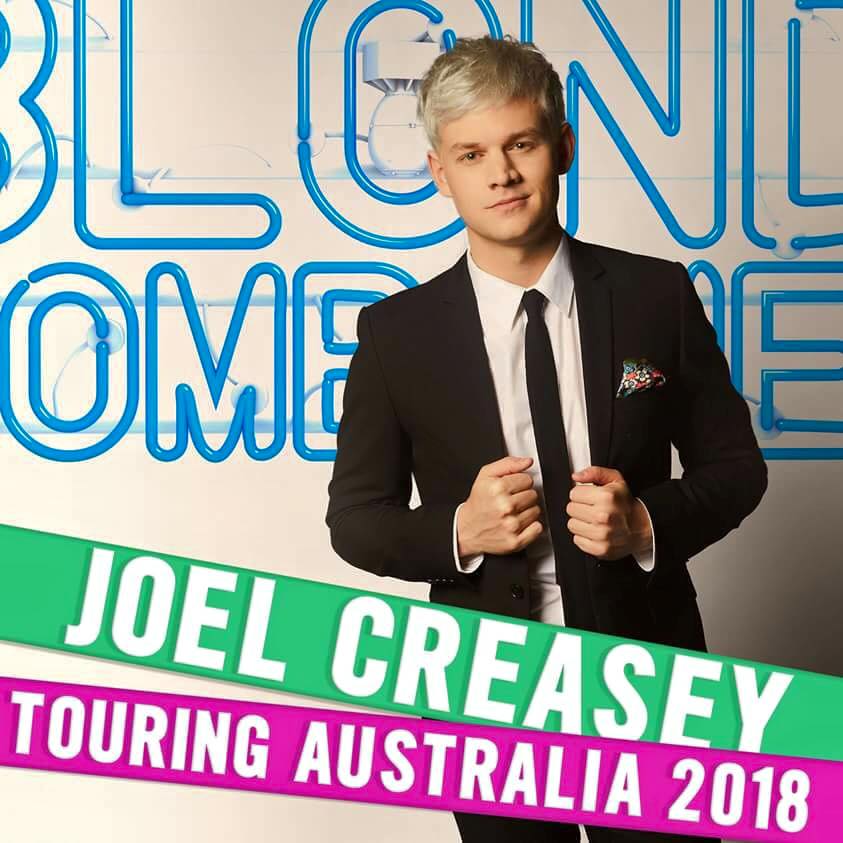 This blonde moptop can talk a house down, even during destruction and the rebuild. Unlike much comedy at the Festival, his show is not about storming the Bastille.  It looks at the murky parts beneath the version of the selves we present.

This fabulous love-in with a media superstar who acts like your best friend at a party sees Creasey regaling his peeps with as much innuendo and bitchy shame-filing as he can cram into one hour. With biting satire, his comments slay at 5 paces, quicker than a splash of hairspray. Nothing’s off limits. As Creasey tells –  Everyone who bought a ticket is safe. It’s those outside these four walls that need worry. 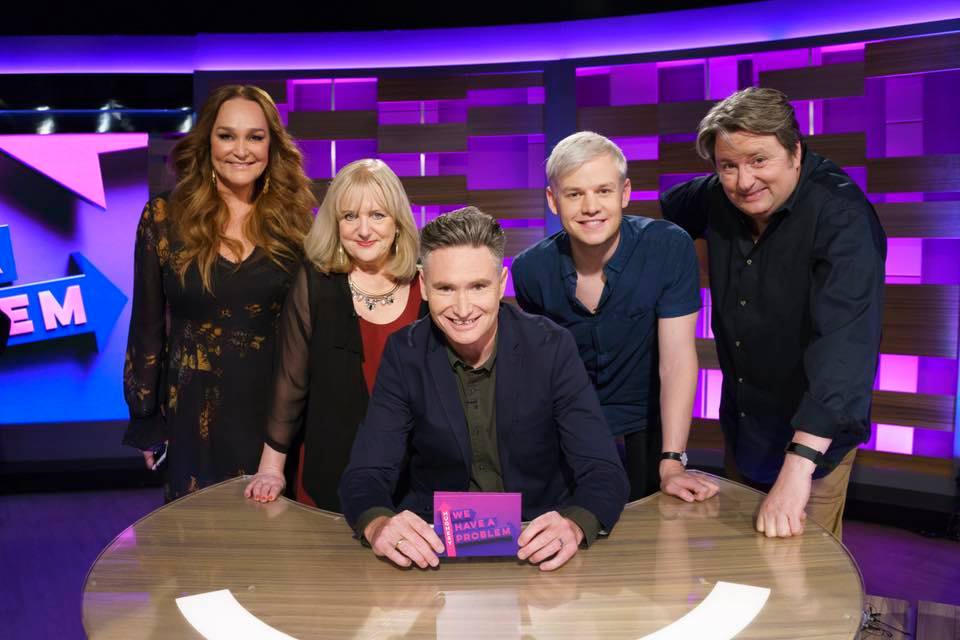 Joel joins the panel for Ch. 10’s ‘Hughesy, We Have A Problem’

Constructed as the perennial gossip, Joel is the B-side to the mainstream media’s A-side, who lampoons everyday wannabes even though he is one as well (he pokes fun at himself, too). No sacred cow is too big for him (he knocks Mr Nice Guy musician, Vance Joy). He’s been introduced on stage by Carrie Fisher and Joan Rivers yet shares stories on ARIA awards night corridor contretemps, SBS TV’s Eurovision technical fiascoes, dressing room debracles, and of his own clandestine after hours shenanigans, including involving that paragon of Aussie machismo, the AFL footballer. It all adds the spicy zing his audience thrill to.

My highlight was his fangirl moment meeting American pop singer Cher at the Sydney’s Mardi Gras…. where he asked what her favourite emoji was?? He’s so authentically ‘real’ people in the audience call out to his questions as if they were down the street having a latte with the divine blonde.  Anyone who shames the graveyard that is the Docklands on stage has my favor.

A digital native, au fait with Facebook/Instagram do’s and don’ts, Creasey voices our inner thoughts and peccadilloes across material that can only be described as What Matters To Australians Now. He speaks on behalf of all of us who hover over our SMART devices, on social media, gasping at faux pas,  issues of national symbolism, and what matters in everyday life, such as who won My Restaurant Rules, or whether Chapelle Corby shops as Costco. Joel is very much of-the-peeps, for-the-peeps, even as he rises to sport the Comedy Crown. 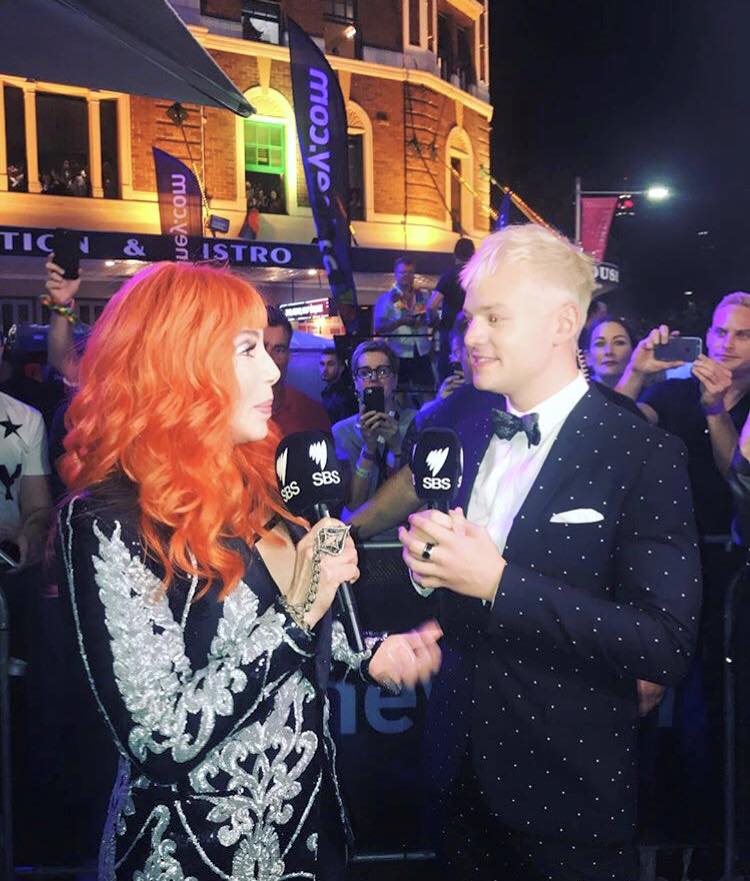 His salacious storytelling flows uncorked with four attempts of I will leave you with this tale… before actually closing the show. The kid loves a spotlight. A Melbourne International Comedy Festival veteran with multiple tours of duty, Creasey performs every night of the Festival  with a gruelling national touring schedule, combined with his other work. His scripts are pitch-perfect, utterly on point, witty, and his timing and crowd cajoling superlative. He is a comedy stalwart that any new comedians should study for endurance, commitment and drive par excellence.

Watching Creasey live is to see a Aussie professional hard at work on their speciality, which is, being himself. Joel makes a career of his character and shows no signs of pulling over into the slow lane. He skewers the trashy obsessions of our age with his razor sharp, perceptive wit, making himself look the fool, while having the last laugh at the whole charade. His work is intelligent, compelling, and like a car accident, you can’t look away.

With enough talent and ambition on him to break internationally and, no doubt, counting the minutes down, grab a ticket to see this stunning diva before he, one day, takes the mantle from Ellen DeGeneres and moves to LA. 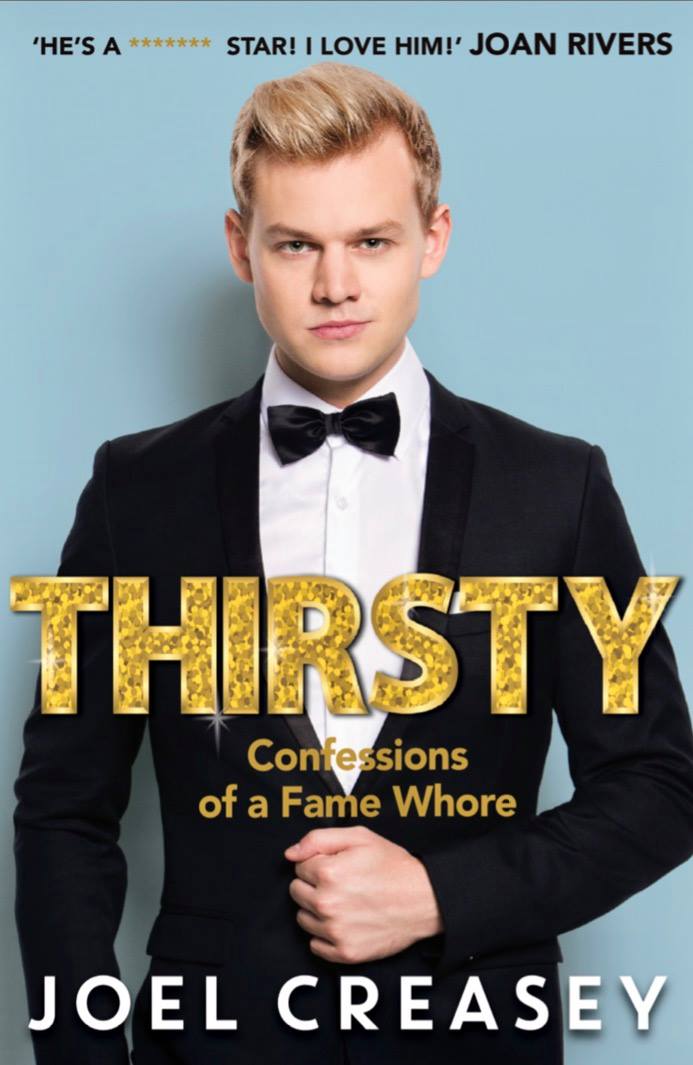 Sarah W. is a dance-trained Theatre Specialist with a flair for the bold, and non-traditional performance platforms. On the street, or in the box seat, she looks for quality works that push the envelope.

Read our guide to the top shows, and all of our 2018 MICF coverage.

Creasey is a nominee for The 2018 TV Week Logie Awards as Best Presenter. Vote here.

Disclosure: The Plus Ones were guests of Hatching Communications.