Run a fingertip along the edge of a wine glass, and listen to the sound gathered in its orb. This is what Oliver Beer does with choral voice and architecture.

Beer finds settings where human voice resonates with building space to form a secular type of hymn. Similar to how vaulted ceilings amplify song in sacred buildings, or stadium bowls treble the roar of a crowd, Beer has an original treatment for interior spaces. At the Sydney Opera House, his Composition for Tuning an Architectural Space is staged backstage. The performance is one of 70 exhibits at this year’s Biannale of Sydney. 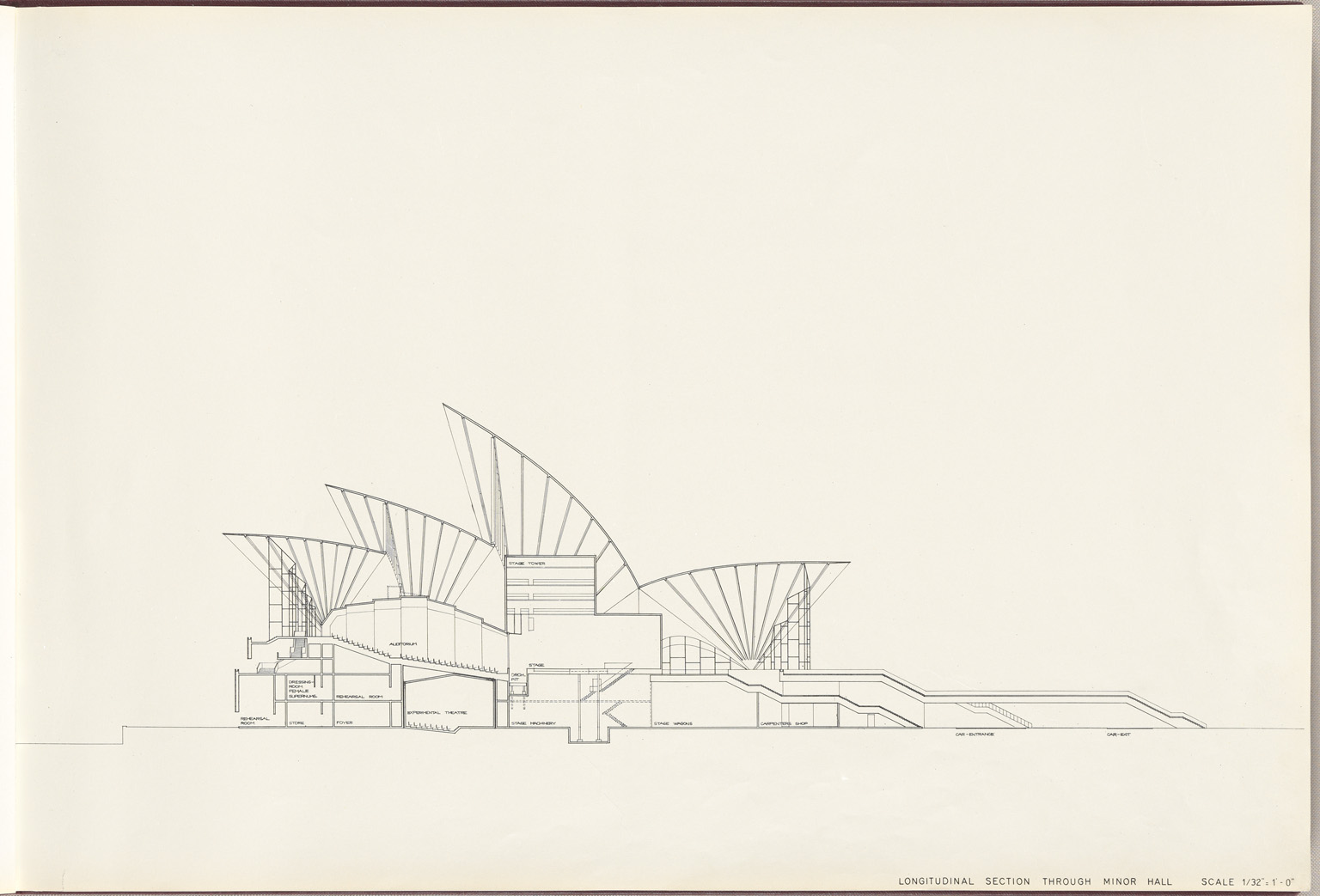 Musical scholarship informs his visceral aural experiences, nontransferable against an age of hyper-reproduction. The sensation of Beer’s choral compositions cannot be pitched through media. Such is the rare value of art that resists replicas, his site-specific work features in permanent collections at Pompidou Paris, MAC Lyon, Ikon Birmingham, and MONA Tasmania.

These compositions demonstrate how buildings can function as musical instruments, activated through resonance with human voice. Beer began his Resonance Project in 2008, each time composing a choral work particular to a building. After exploring every part of the Sydney Opera House, he chose a stairwell for its musical notes. His exploration consisted of humming at varying frequencies in different spaces. Far from being inert, every building has an intrinsic key, or potential for voice. 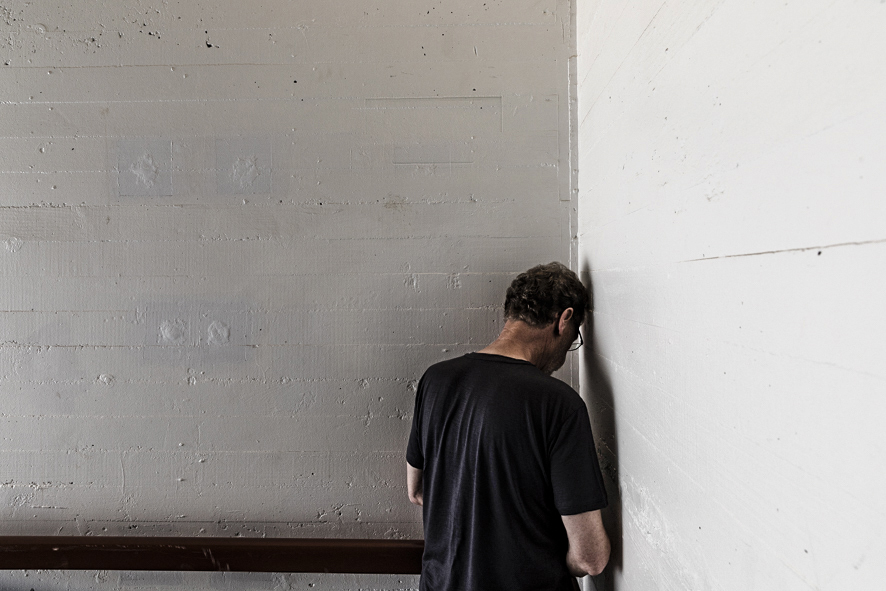 The composition for Sydney is a ten-minute choral performance for intimate audiences. What audiences see is strange: performers facing into corners. The scene looks like a deep intimacy between singer and building. Then a vocalist gives voice, and the echo reverberates in response. This is the building’s key note. One by one, other vocalists join in. Building and vocalists are a choral ensemble producing an unusual polyphony, in a stairwell salon. Its effect is encompassing, quasi-religious and hymnal in quality.

Iterations of the Resonance project have been staged at the Pompidou in Paris and PS1 in New York. Sound properties were also found in London at the Old Vic Tunnels, and in miscellaneous objects at Ely House. 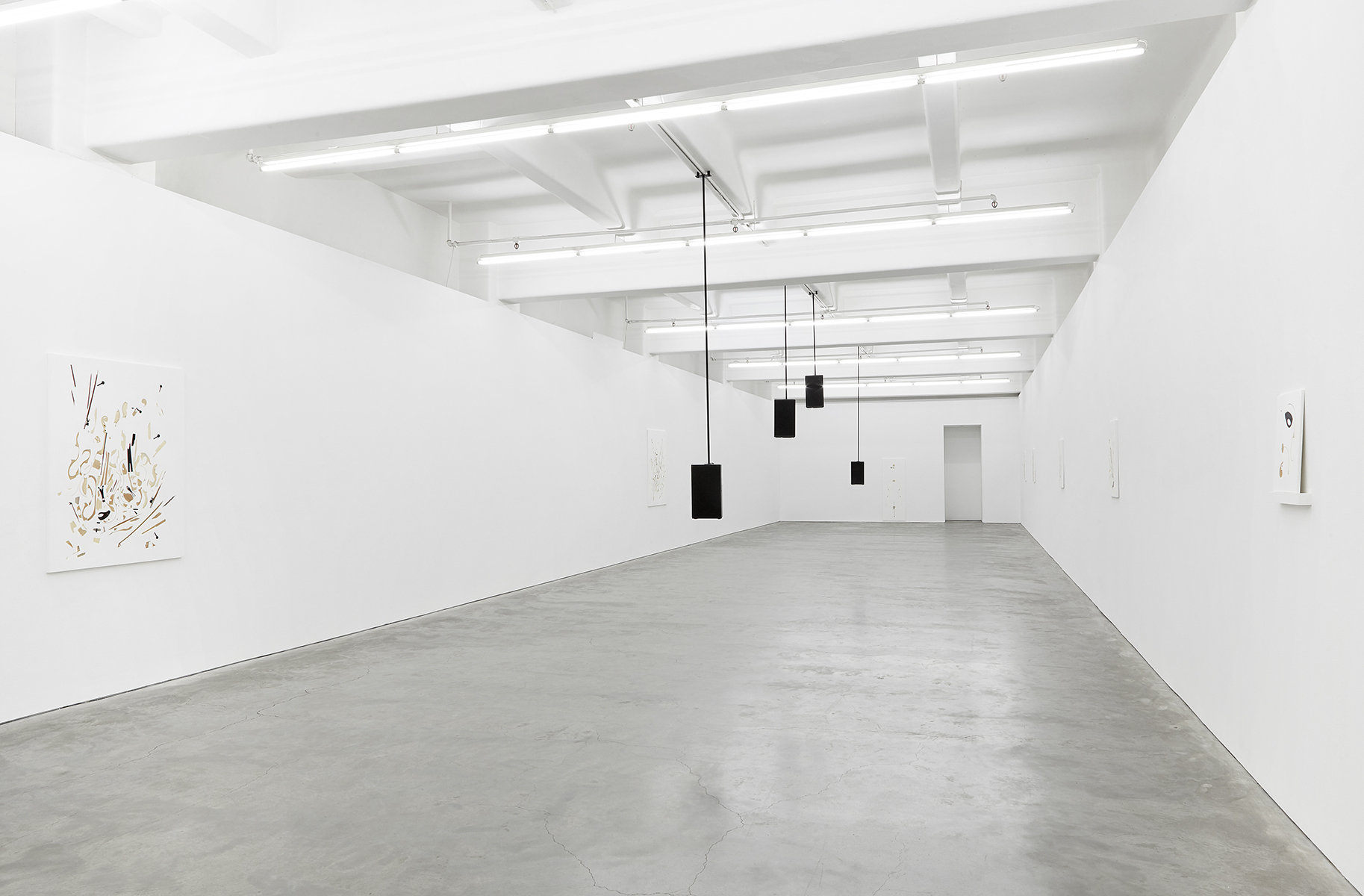 Concurrent with the composition for Sydney, Beer is showing his inaugural Australian exhibition at Anna Schwartz Gallery in Melbourne. Violin portraits and a choral composition fill the main room. During his Sydney Biennale residency, he learned that Opera House architect Jørn Utzon conceived of the building acoustics as akin to a violin’s. Sectional portraits are named after Utzon, while splintered portraits are named for Beer’s Biennale vocalists. 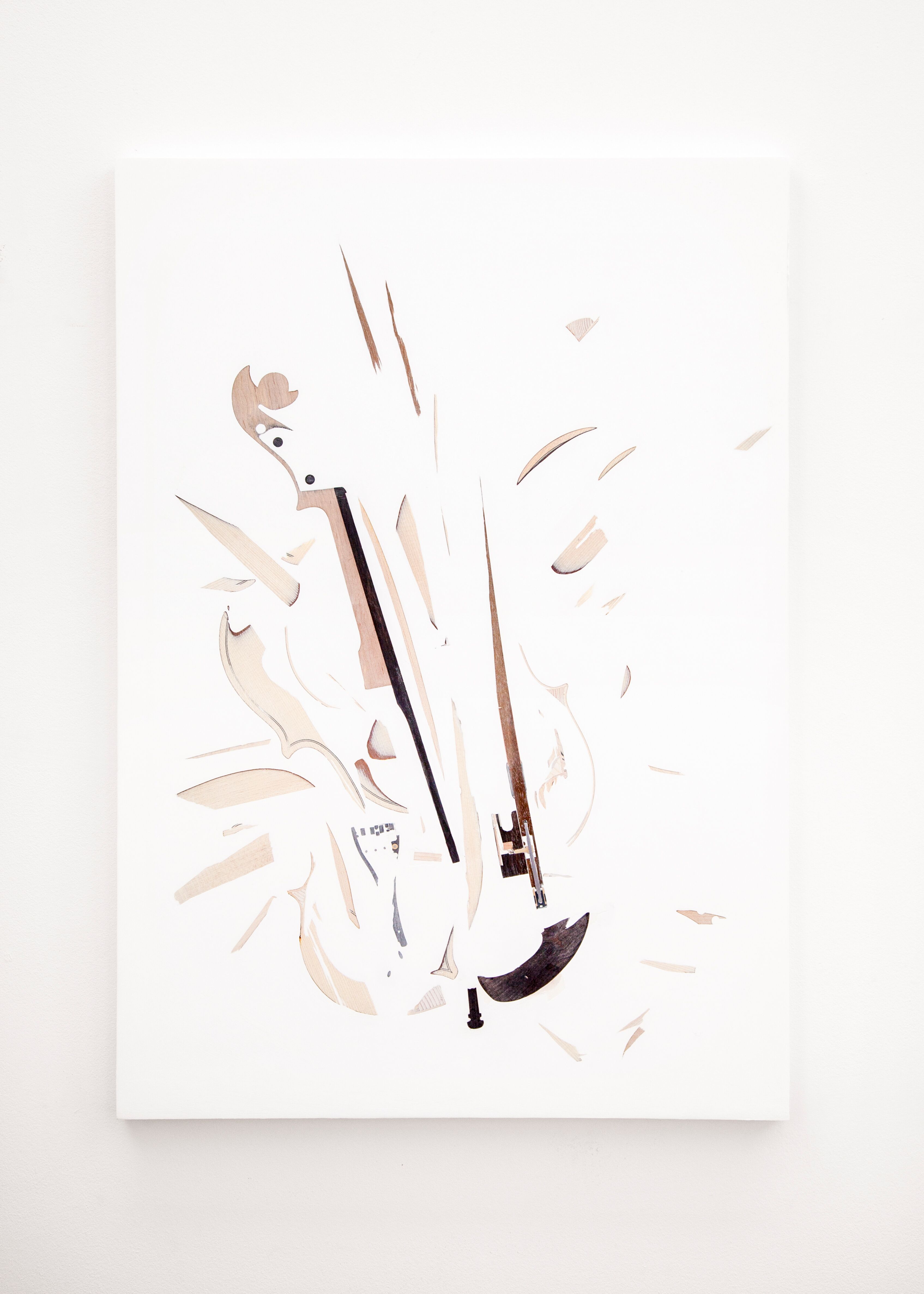 The portraits constitute violin sections and splinters inlaid in resin, with woodwork as translucent as pencil drawings. Those sectioned are like architectural plans of building interiors. Those splintered in midair evoke Wassily Kandinsky idioms of point, line, and plane. Beer’s technique is a reference to technical draftsmanship and Kandinsky’s Constructivist aesthetic. 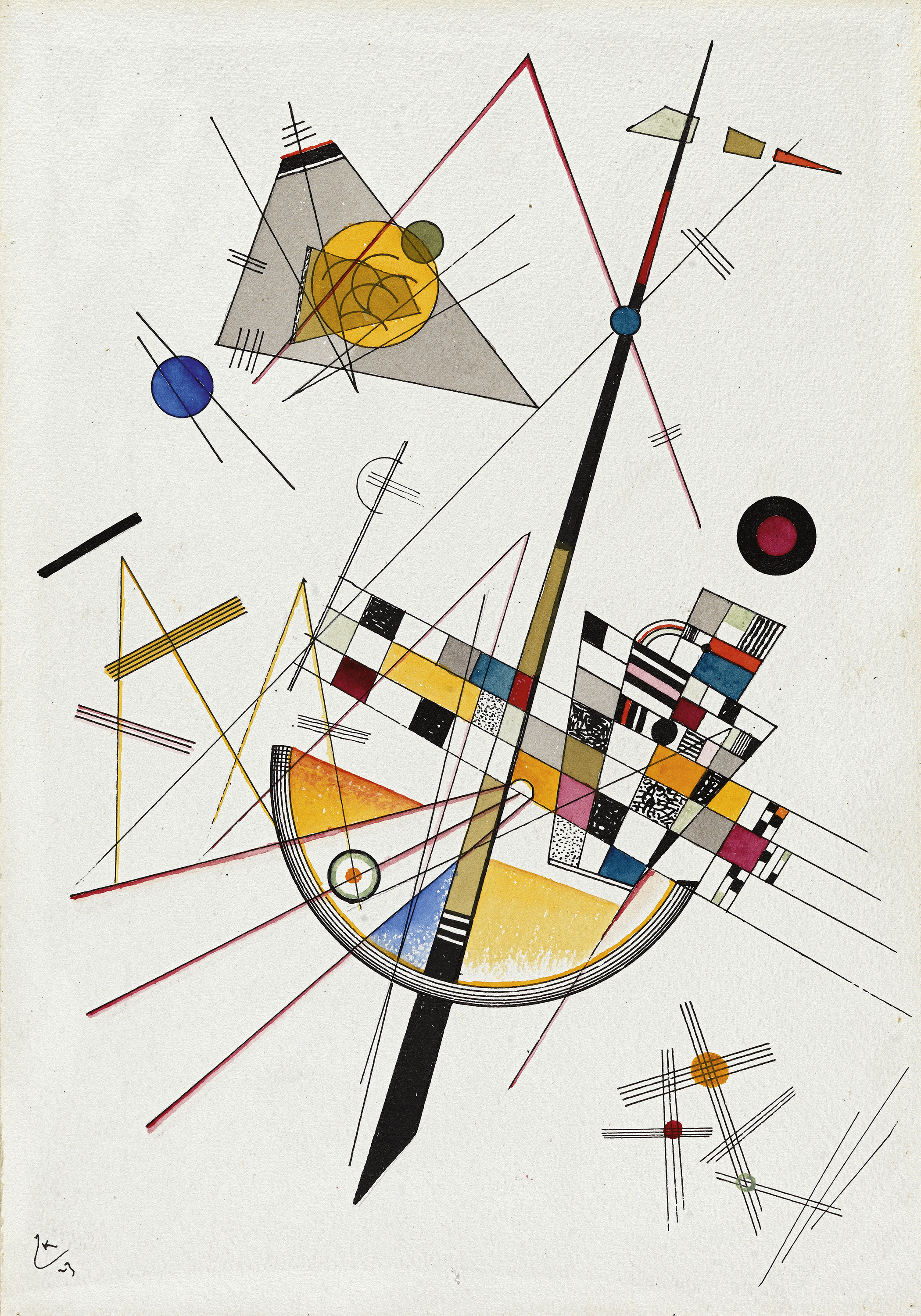 Both violin portraiture and sound artistry are descended from Futurism, the anti-establishment movement from Milan inspired by an industrial zeitgeist. Manifesto of Futurist Musicians (Pratella 1910) considered the art music of Wagner, Mussorgsky, and Richard Strauss to be game-changing and forward-thinking. The Art of Noises (Russolo 1913) suggested that background noise or inhuman sound could be modified to make music. By the 1940s, Pierre Schaeffer and others at French radio incubator Studio d’Essai (Experimental Studio) were making musique concrète from modified “found” sound:

In addition to music, the Futurists also wrote manifestos for a range of art and design disciplines. Conceptual ideas were transcending disciplinary and national lines, as artists across the continent turned from figuration to abstraction. Kandinsky, who looked to Italian Futurism when developing Russian Constructivism, painted abstract representations of musical subjects. In a related sleight of arts and craft, Beer is using decorative inlay to create musical representations of abstracted portraits.

The Futurists predicted a day when any art medium could represent another art medium. This is the day seized by Beer, who uses choral voice to represent architecture as sound art, in the experience economy of biennale culture. It is ear-opening.

Composition for Tuning an Architectural Space is at the Sydney Opera House until May 8. The ticketed performance runs for approximately 10 minutes.

See the best of contemporary art at the Biennale of Sydney with our Plus Ones’ Guide.

Images: courtesy of the artist and galleries

Satire that bites: Song For Simon Birmingham – A Lifestyle Choice! at MICF

Joel Creasey: The Blonde that drops the bombs at the Melbourne International Comedy Festival