There’s no better way to welcome in spring than via MTC’s lush new production of famed quipster Noel Coward’s 1925 farce about silly society in comic romp, Hay Fever. Almost 100 years old, this knockout version offers top-class cast, crystalline performances, costumes that delight, and a awe-inspiring era set. Throw in pointed satire about class, gender, and relationships, a twenties sound score, hilarious physical comedy, and period song and dance, and you have a wonderful way to herald the start of the silly season! There is much authenticity in this production which also embraces it’s modern themes.

Directed by Lee Lewis, who wanted the language to seem ‘Australian’ with a contemporary rendering of Coward’s timeless comic innuendo, there is a generosity of performance, production, casting and delivery which reaches out,  taking us up in its bosom, with a will for fun and merry mischief that is contagious. You almost feel you are next for a weekend visit so cleverly is the fourth wall magically evaporated. It’s the casual charm this cast so cleverly portray that entices, embodying all Coward could have wanted. Like playful kittens, the capricious family members wait to entertain anyone put before them, striving to bewitch and gain approval as seek their own identity. This plot contains partner swapping, quick marriages, switched allegiances, confessions, one infamous return to the stage, and is both parody of and touching homage to the idle rich and theatrical types who live in a world of their own. 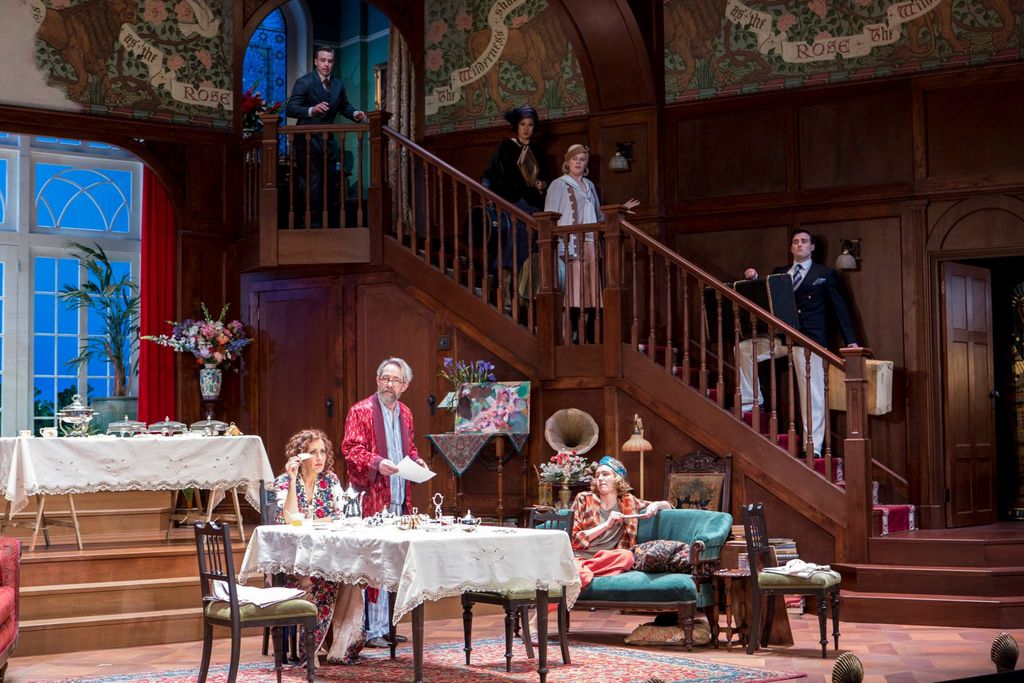 Evoking the country house of the Bliss family, MTC master artisans, under Christina Smith, lay a breathtaking scene for us in the hall of their Cookham estate. When the curtain raises, the interior is both bucolic, referencing pastoral England, and evocatively detailed in period show. Recreating an Arts and Crafts home, your eyes with dance for hours over traditional furniture, wood-panelled walls, wall friezes, decorative timber work, heavy tapestries, ornate rugs, a mock stained-glass bay window, rear conservatoire, copy chinoiserie, and a grand staircase up and down which lots of the physical comedy plays out! Costumes by Esther Marie Hayes also captivate, with art deco lines, beading, colour, stripes, and flair which evokes the new freedoms nascent modernism gave to those who had money to burn in the pursuit of their pleasures. 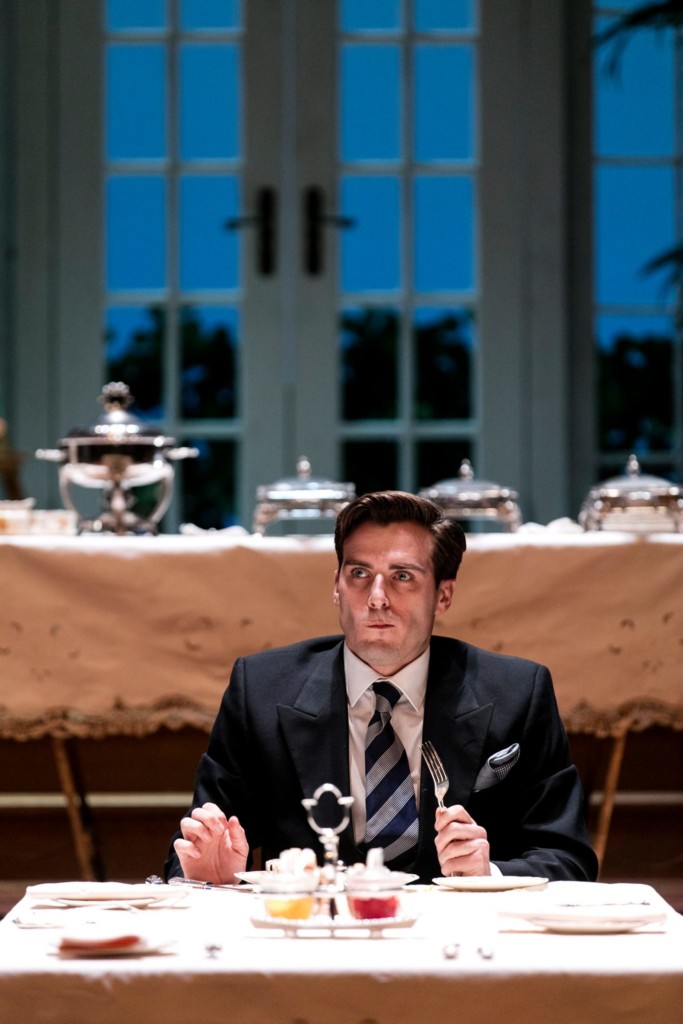 Here play out the shenanigans of a vacuous bohemian, arty Bliss family.  Nestled in their country ‘nook’, each member still longs for what they readily locate in the city – an audience. Led by former stage great, and mother, Judith, played with stellar aplomb by star performer, Marina Prior, and her spouse, passed over armchair novelist, David, charmingly crankily played by Kim Gyngell, we watch the petty power games these overgrown children play in front of their own offspring, Simon and Sorel, who seem desperately in search of occupation. Without career, or marriage, they bicker to entertain each other as well as to capture their parent’s interest and don’t care who else gets in the way of fire.

Unadvised, each family member invites down for the weekend their most recent paramour to entertain. More like setting a cat amongst the pigeons, these guests, and their criss-crossing dalliances with alternating family members, results in a seduction caper that offers the energetic spring that moves the story along, with some classic early Coward one-liners! This play is based on a theatrical American couple Coward lived with in 1924 when he went to America to see if his work would be performed. 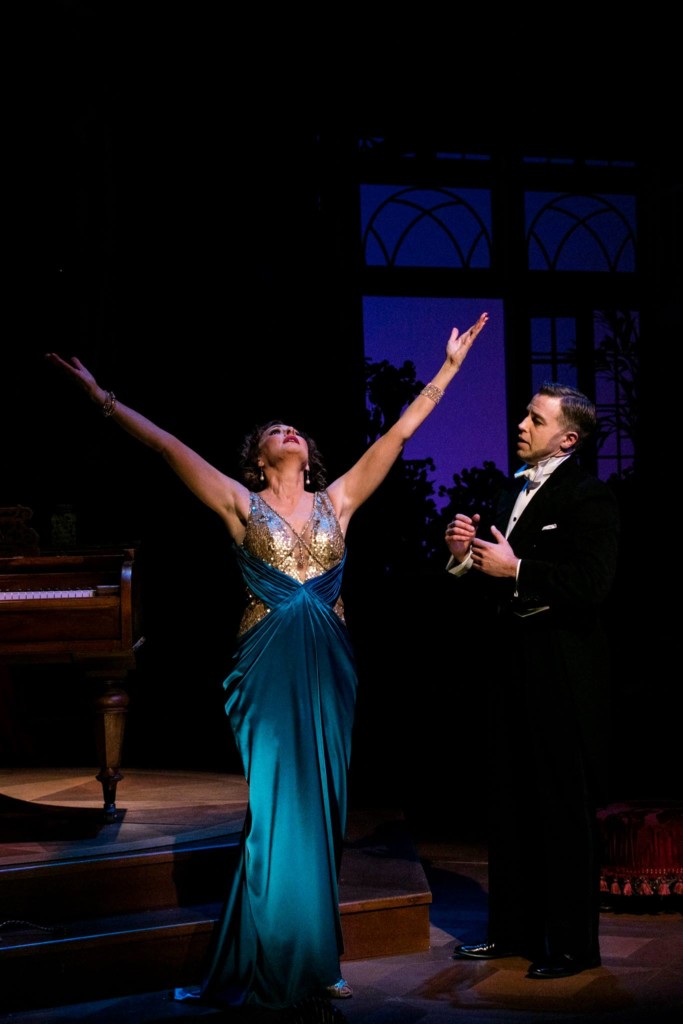 The cast beautifully embrace all the script offers them- a comedy of errors which humiliates each master player, eventuating in banal vanitas. After the guests exit, each member is left alone only with themselves, company they, being narcissists, prefer. Outstanding old style theatrical nous is put on show in the expert comic timing and physical play of Drew Weston as eager-to-please handsome guest, Sandy. Each actor gets deeply into their character, showing all the nuances of demeanour, conduct, voice and delivery which bring them to life. Embodied acting by young Gareth Davies as Simon, and Imogen Sage as Sorel, are supported by an ensemble excellence that shows all the right cast have been selected to honour both the jewel that is this play, and as sign of the love MTC has for its audience, many of whom were there to see a Coward great delivered.

Coward’s lines are the best thing about this play, along with the comic opportunities it gifts. The bubbly rhythm of the script is kept buoyant by the cast who relish its folly, as if bubbles in champagne.  The guilty escape of the guests via the staircase without the breakfasting family’s knowledge is an hilarious highlight of old-school clowning which had the audience laughing for minutes! Old fashioned pleasures such as this will delight in this production. This is not the outing of an old dame. It’s a brilliant version of shimmering skill and beauty which we can be proud to call our hometown own. An MTC classic!