A sensitive interrogation of Shakespeare’s famous play about a flawed hero’s trashed early love, Ophelia’s Inner Monologue, does not disappoint with its scrutiny of his lady’s view of the action. Written off in Shakespeare’s 1602 play in a questionable quickie-suicide, this character has always raised more questions than offered answers. This bold new angle on a neglected aspect of his grandly misogynistic tragedy is about young women’s identity and could spring from no better starting point than than this female cypher.

This clever Indo-Australian production, written and composed by Aridhi Anderson for The Day Dream, is sweet, sophisticated, funny, and deep, bringing the young ingenue’s tale from Nordic folklore into 21st century domestic life. It has been performed around Melbourne this year, as well as in New Delhi. 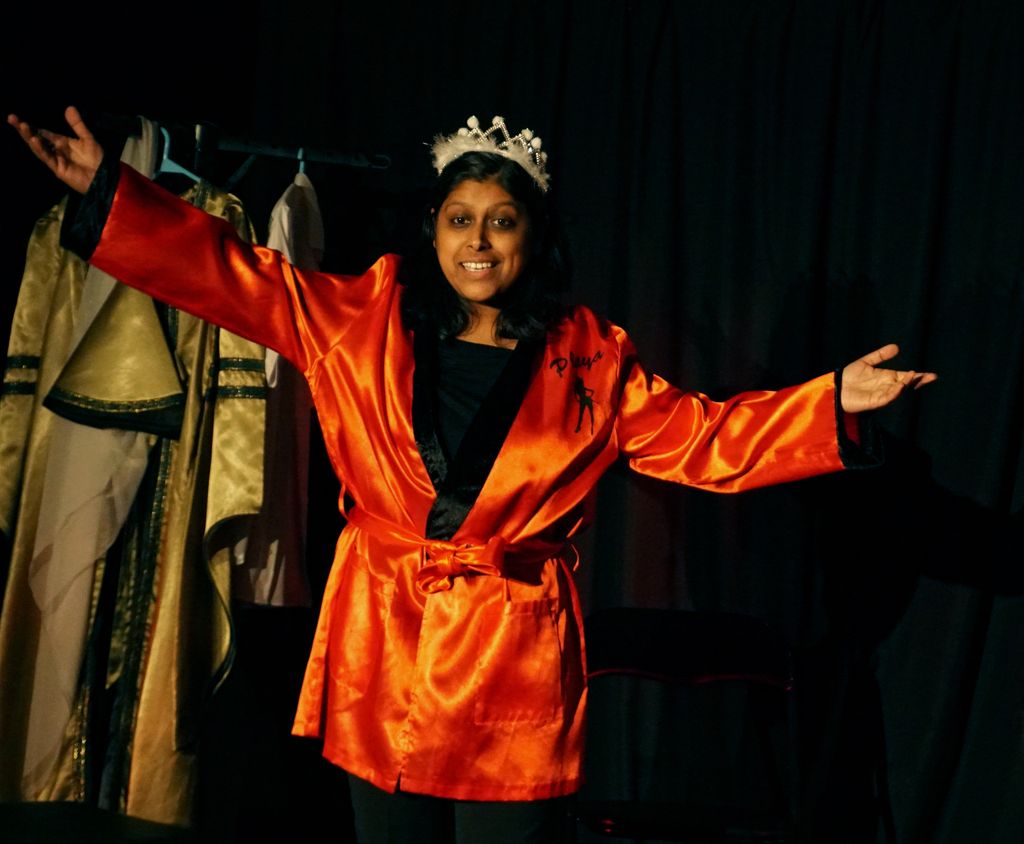 Our female lead is Ari, at home practicing male soliloquies from Hamlet for a next day audition when she is meant to be working with her partner’s workmate, played attentively by Rachel Smith, on a court case he is embroiled in –  which he won’t tell her about. Ari is kept in the dark about male action in the same way as Ophelia doesn’t understand Hamlet’s inner motivations. Shakespeare’s Ophelia is stood over by her bf, uni drop out and latent homosexual, Hamlet, her posturing Dad, Polonius, as well as getting the heavies from her picture-perfect older brother, Laertes. Near marriageable age, she is lectured in how to behave in order to preserve her virginal reputation, to court correctly, and to maintain the family’s noble position. She has limited lines, doing more enforced listening than active questioning, and always to the opining of male speakers.

Ari’s bf calls her incessantly, discouraging her pursuit of personal interests. Ignoring his protestations, the two women instead enjoy their company, working together to deconstruct Hamlet’s characters and relationships.  Think bedroom confession, a common scene in Shakespeare where women’s gossip is a form of counselling. Their frank back and forth exchange is almost the best bit of this show being cheeky, daring and full of empowered creativity. A bare set with simple props of subtle costume changes sees Ari trying on different presentations both of Ophelia – and herself. They debate why few actresses want to play his females (diminished agency), and open up something Ari didnt expect- her connection with the role of Ophelia in her own life. 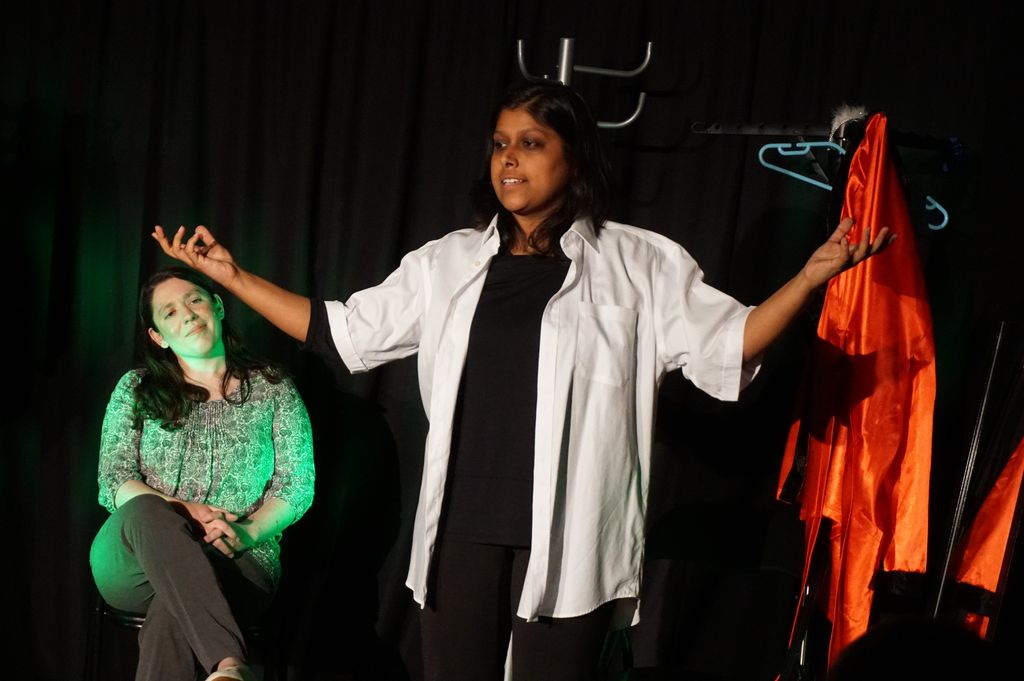 Literary Ophelia’s plotlines are mere trope for male destiny as they compel her to act in a particular way that better advances their profiles within the royal court.  A 14 year old, she is intimidated, browbeaten, coerced, and cruelly handled by each of her closest male relatives, and confidantes. She is later ‘discovered’ mad, handing out flowers at court, like a tramp, eventually dying unseen, drowned in a river, a supposed suicide.  Her self-abuse is criminal and considered undeserving even of burial. There is a lot rolled into this damsel-in-distress that is so little investigated on stage or in art, making this well-crafted attempt so commendable! This work evinces both performance polish and theatrical expertise in its construction as well as its conception.

Ari believes she has nothing in life to live for aside from her main role caring for her boyfriend, except for ‘theatre’. From a play where it’s lead endures a sustained crisis of confidence, this play parallels Hamlet’s presentation of mental instability concurrent with our Ophelia’s location of her sanity and decision-making power. It’s fascinating to watch. Thred through with energetic delivery, strong performances, and lovely original Elizabethan-style songs, this is a gripping trip into the reality of a female too soon silenced and killed off. 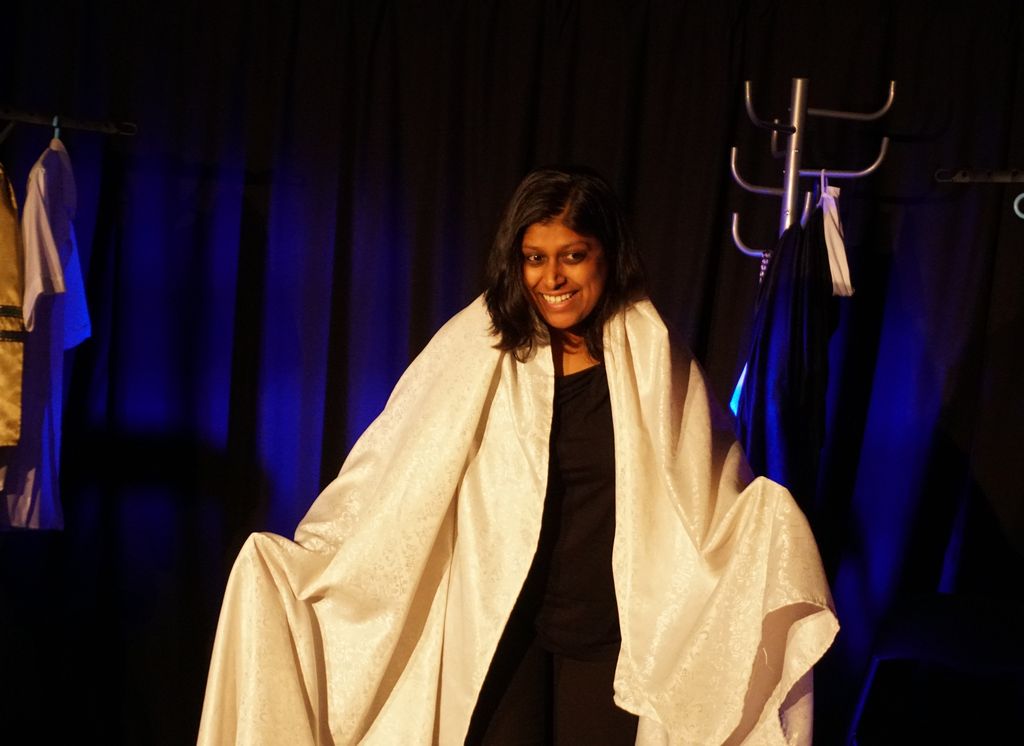 There are some fascinating parallels and reverse mirrorings of the original plot, with this script imagining the ghost of Ophelia’s Mother. Rachel, like Horatio, is the close friend poor Ophelia never possessed. Ghosting, gas-lighting and lines such as “Ophelia wasnt a loser. Hamlet was a jerk!” from her keep Ari real. In contrast with a time where literacy for women was rare, Ari consults internet forums questioning her boyfriend’s conduct, showing us that, in some cultures, keeping women disempoweredin the domestic still continues, but which can be subverted through access to a broader community, and information, via this age’s technological democracy.

The script is funny, deft, and pointed. It’s literary polemic as well as feminist. There is a lot to like in this clever journey into who Ophelia might have been, a sketchy character transposed into a modern female’s life journey. This heroine brings her back from her untimely grave, excavating her from limited lines, forced circumstances, and articulates action from her POV, allowing us to, finally, hear events from the girl herself.  Ari here discovers herself, as she prepares to audition as Ophelia, no longer a role she considers ‘minor’.

See this work if you love great literature and have ever wondered- who was Ophelia?

The Day Dream deliver weekly acting workshops across all skill levels on Thursday nights in The Nicholas Building. Book tickets here for October 5.