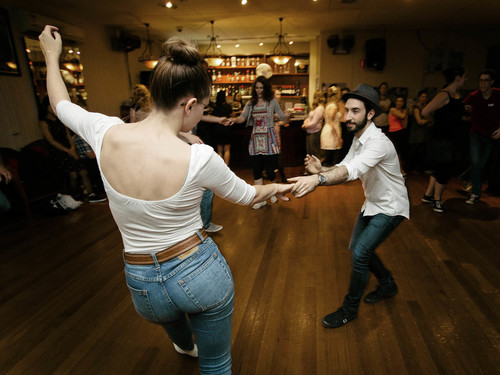 My first foray into swing dancing was during the Melbourne International Jazz Festival which was an event of epic proportions. As with most things dance-related for me, I soon forgot about the fun to be had and settled back into my normal dance-less routine. However, in the back of my mind it lingered that swing was one of the few formal dance styles where I actually had fun. So when the Rugcutters team, Georgia and Kieran, decided to hold a pop-up swing party I couldn’t help but jump at the opportunity to attend.

The team held its party at Bella Union with three sessions: beginners from 6.30pm to learn some basic (but cool-looking) moves, advanced practitioners, and a giant mash up of all things swing from 9pm. The basic moves arm you nicely for the fun to come and will hopefully keep me in good stead for many a swing to come.

I turned up to the event partnerless. Why is it so hard to get people to dance? However, I was quickly welcomed by the team and fellow swing-goers. When the moves started leads stayed in place and followers simply rotated around the circle. It was super simple to get to know people and nerves were calmed when I realised we were all at a basic level of learning.

The session went for around an hour. You can attend their regular sessions on the third Tuesday of each month. At $15 it’s a steal. Did I mention that there were six girls and two guys…

Keep up-to-date on all things swing on the 1929 Studios website and Facebook.
Rugcutters runs every third Thursday at Bella Union in Carlton.