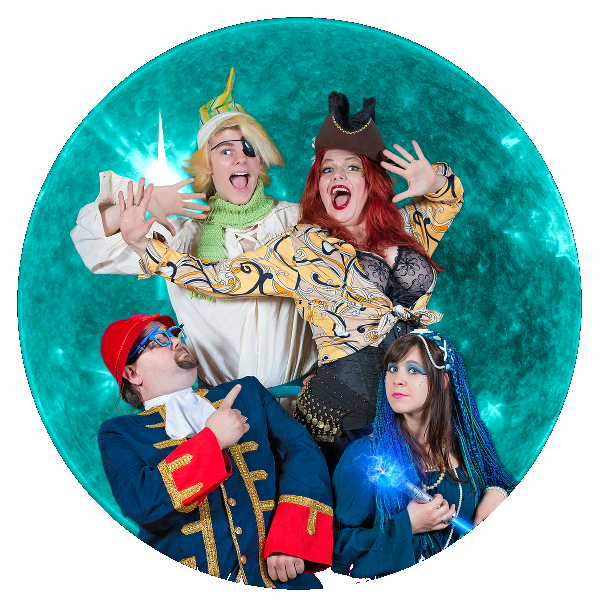 image via A Bunch of Pirates

“I’m going to a transdimensional pirate comedy,” I told people at the Little Creatures/Little Veggie Patch Pop-Up last night. Yes indeed, the title alone of the Comedy Fest show ‘A Bunch of Pirates: A Transdimensional Adventure‘ got me excited.

The plot follows pirate captain Hilly Harbuckle and her shipmates as they sail through different dimensions. At times it had a bit of a Red Dwarf vibe (yes, I’m referencing a 1990s British scifi comedy — pretty sure I was the target audience for this show). The motley band of ragamuffins gets hired by two fire gods to track down some special Wellington boots — yup — at a goddess’ birthday ball. Along the way they’re chased by the Garden Gnome Gnavy (pronounce those ‘g’s) and pick up a talking hamster to help. Occasionally they even burst into song.

While the technical limitations of the Bull & Bear adversely affected some of the moments, the usage of props to stand in for characters was quite cute. Two actors variously played the fire gods, talking fish, and the aforementioned garden gnomes. The standout for me was the actress playing Hilly Harbuckle. She’s very engaging, has a great accent, and really involved the audience. I also liked the Garden Gnome song by Admiral Gnorman Hedgetrimmer (although all the songs would have benefited from slightly shorter lengths).

This show is all slapstick — there are farting angels, along with a sword fight with the audience. It’s billed as being suitable for ages 13 and up, but I reckon they should re-gig the plot a little and take it around schools. Kids are going to love the adventures of Captain Hilly.

‘A Bunch of Pirates: A Transdimensional Adventure‘ runs 27 Mar-19 April on Fri/Sat/Sun at The Bull & Bear Tavern.
The venue is accessible.

Disclosure: The Plus Ones were invited guests of Glass Wings Productions.