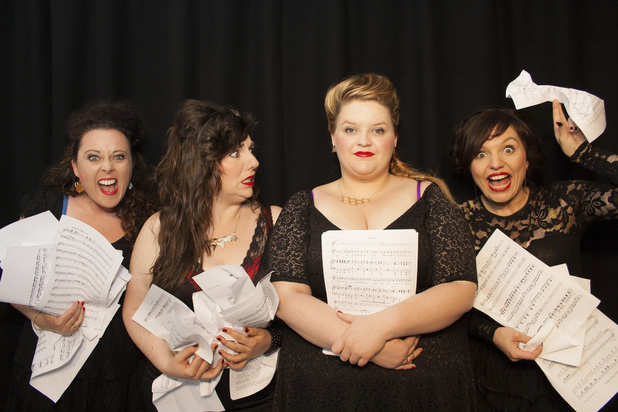 photo via Lady Sings It Better

A night at the Cabaret with four babes up on stage in matching outfits… except those outfits bear a mighty resemblance to the Wiggly rock stars of your youth. Lady definitely sings it better: if you’ve ever felt the need to hear every sexual song relating to animals sung in perfect feminine four part harmony, your wish will be fulfilled with ‘Lady Sings It Better‘.

Maeve Marsden, Libby Wood, Annaliese Szota, and Fiona Pearson are a force to be reckoned with. They are there to take you on an educational journey through song — and by golly, do they ever, accompanied by Hayden Barltrop on piano and Lauren Allison playing a mean cajón.

‘Lady Sings it Better’ is the best kind of feminism — it just lays the evidence in front of you to analyse yourself as a comment on society. True love songs such as ‘Every Breath You Take’; odes to the female anatomy (every song about a booty, ever); and tributes to the animal instinct of the male pop star are presented with synchronised dancing and a comic delivery second to none. Not to mention the fact that each of these ladies has the vocal range of one of the badass Muses from Hercules (the good ol’ Disney version, of course).

You’ll have chills up your spine, and not just from the realisation that all the 90’s-early 2000’s classics you always loved and sang along to are actually SUPER CREEPY. Oh, patriarchy. At least you give us some damned good comedy material.

‘Lady Sings It Better‘ runs 15-19 April at The Butterfly Club.
The venue is not accessible.

Disclosure: The Plus Ones were invited guests of Lady Sings It Better.