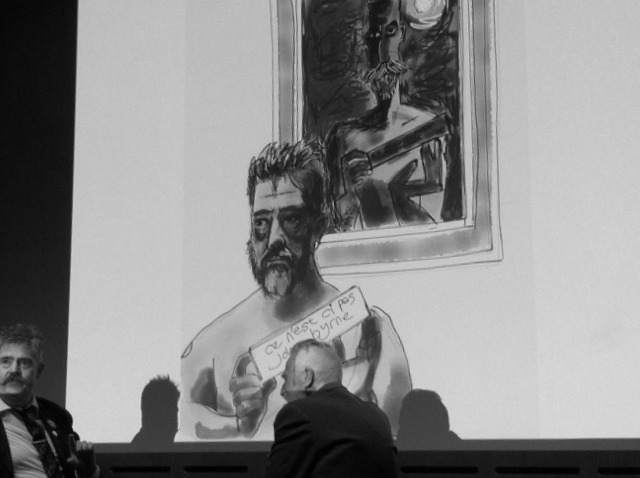 The Edinburgh Festival fosters and promotes some strange and unexpected meetings but Phill Jupitus in conversation with John Byrne was one of the most entertaining I’ve seen! The event is free but I would have happily paid.

Phill Jupitus is spending time during the festival using his ipad, copying some of Edinburgh’s well-known pieces of artwork from the Scottish National Galleries collection. Each Thursday evening he then invites someone to review his efforts and discuss “art “ as well. This Thursday it was the turn of the well knows artist, dramatist and painter of the Kings Theatre Ceiling, John Byrne.

The chemistry between the two from the outset engaged and relaxed the audience into warm laughter. There was much to laugh about.  Phill is a well-known comedian but John gave him a run for his money with his self-depreciating observations such as “ I always regretted not being able to produce child like art, when I was a child… it always just looked like it had been badly done by an adult”. Phill obviously found John highly entertaining as well as being fascinated by the work that he produces.

The conversations stimulated by John’s work and Phill’s copying of, for example, Burke and Hare’s death mark at the Portrait Gallery gave the audience an interesting insight to how both men respond to as well as create art.

By the end of the very quick hour, it was clear both men had love of art and humour in equal measures and although it was the first time they had met, you could tell there was a lifelong friendship in the making.

Next week Phill will be at the Scottish National Portrait Gallery between 10am and 12pm daily and he invites everyone to come along with their ipads or drawing material to join him in making and sharing art.

Next week’s “free” conversation event is between Phill and Steve Frost in the Scottish National Gallery on Princess St, 7pm, I’ll definitely be there and you should too!

Morag Pendry is based in Edinburgh and belives in all things social enterprise and co-operative.  She can most usually found quaffing whisky in untrendy places.