Camp, over the top and madcap are elements I’ve come to love with local theatre company ‘A Slightly Isolated Dog’.  And their encore season of Jekyll & Hyde comes back with their well-turned flamboyance.

Like all their shows, this is spectacle and performance. The lines between audience and performer are blurred and messed about. As soon as the doors are opened the spectacle begins. The actors, in ostentatious faux French accents, usher us in to our seats. Everyone is included as they whisper saucy asides and one-on-one jokes to us. The audience is decorated with satin scarfs. The cast oooh and aaah over our fashion choices. We all feel included in some kind of crazy parlour party. 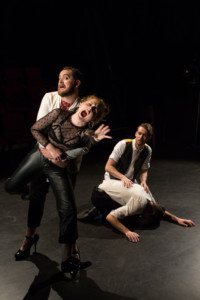 My Plus One and I choose to take seating on the stage, so we could look at the audience in the seating block. I recommend taking this vantage if you can, as it’s endlessly amusing to watch an audience take in a performance like this. Though set in a traverse, the actors move about the space and audience. Zipping and zig zagging dialogue over our heads – giving us props to use and prompting us when to cheer, or get involved.  The focus and action fragments and regroups with the cast keeping a tight rein on the mercurial energy flying around the room.

The story itself, a much reduced and simpler version of Robert Louis Stevenson’s classic. Is clear and easy to follow. Cleverly the characters of Dr Jekyll and Mr Hyde are represented by hats that rotate through the cast, and sometimes the audience. Each member adding their own spin to the main characters. Set in a Victorian England that shared many similarities with modern Wellington (including the most hilarious bucket fountain I’ve seen) we can relate to this tale. We understand the struggles of the darkness within. With this cast we can laugh at our attempts to suppress our nature and postulate on what balance in this crazy world really means.

My Plus One left grinning saying, “That wasn’t what I expected, but it was loads of fun”. If you need something light-hearted this is the show for you.

Jekyll & Hyde runs until 2 February at Circa Theatre. Purchase tickets now.
The venue is accessible. Like A Slightly Isolated Dog on Facebook and Instagram for info on extra performances, videos and silliness

Disclosure: The Plus Ones were invited guests of A Slightly Isolated Dog

First band gig of the year at Valhalla

The best events in Wellington in February 2017