Surely Adelaide in March is the best place to be in the whole world! When ‘Mad March’ is in full swing, WOMADelaide is at its epicentre, drawing the full spectrum of colour, culture and energy to the iconic Botanic Gardens/Tainmuntilla. Now in its 30th year, WOMADelaide is a firm fixture on the family friendly festival scene. With the newly opened borders, it will be attended by festival goers from across Australia, and indeed (now) the world! We are indeed ready to celebrate, and WOMADelaide is the perfect setting to do so! 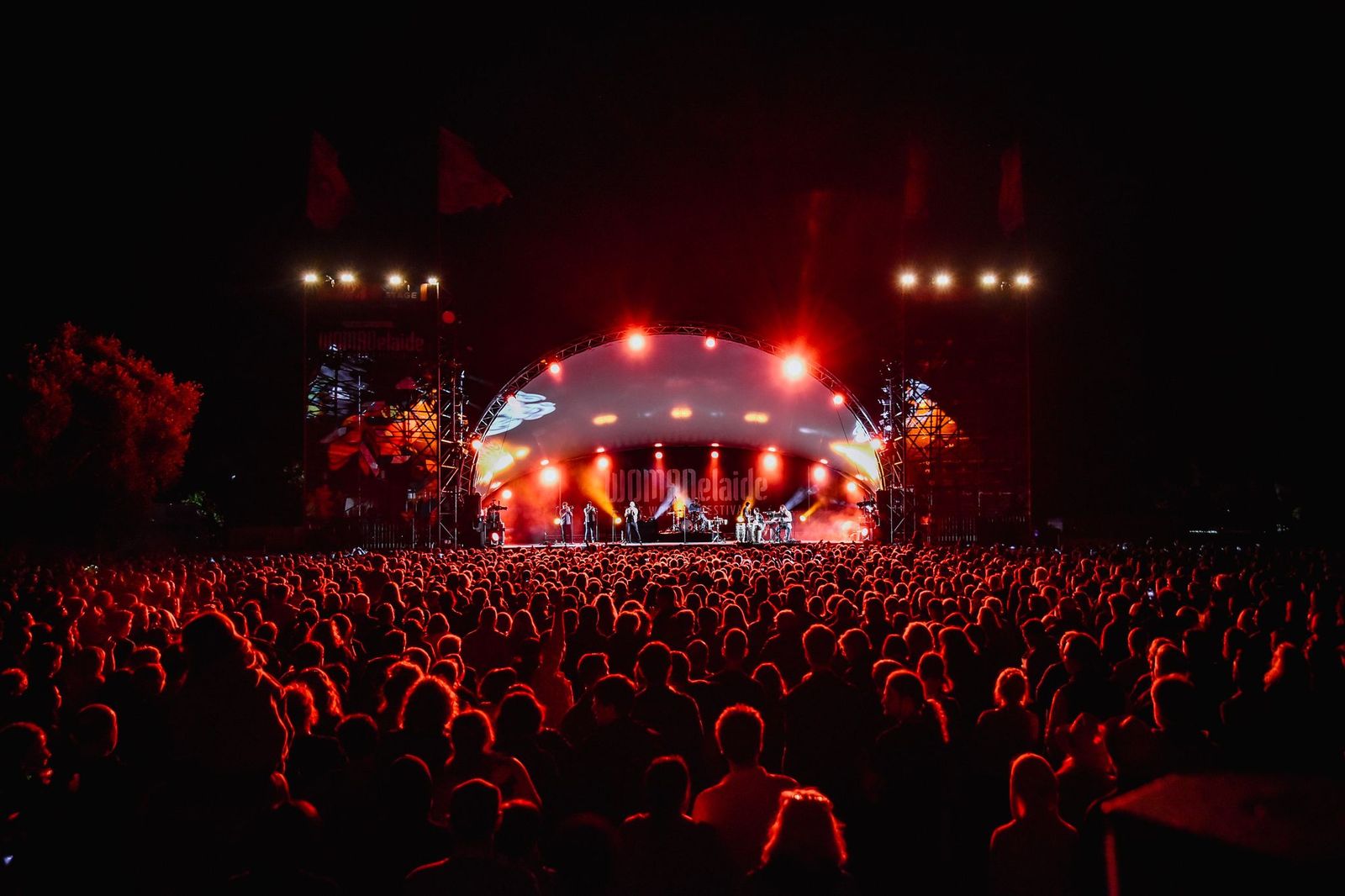 Understandably there is a largely (though not exclusively) Australian based line-up this year. In true WOMADelaide style the stages will showcase the widest variety of home grown Australian talent along with many of the internationally influenced acts that have made Australia their home. The will be debut performances (The Crooked Fiddle Band, Courtney Barnett), crowd pleasing returning performances (Electric Fields, L-Fresh The Lion), those that performed at the first WOMADelaide (Paul Kelly) and even final touring performances (The Cat Empire) among the impressive line-up.

With such a plethora of acts, workshops, tents, talks and performances to see, it can be almost overwhelming. Luckily, your trusty friends at the Plus One’s can provide their experience and insight and help you navigate your way through the Gardens extensive program.

Here we have selected a few of our must-see bands and acts in the most democratic of orders: alphabetical.

Ausecuma Beats – There is a story here! Based in Australia, yes, but also from Mali, Guinea, Cuba and Senegal. With African roots, there is African rhythm. Playing on Saturday and Sunday, these mid-afternoon sessions are the perfect way to get that second coffee coursing around your body! And if that is not enough, come down to the workshop for (even) more interactive vibes (see below).

Baker Boy – While it is testament to the WOMADelaide line-up that there are so many artists that can deservedly have the accolades “proud”, “confident” “inspiring” and “multi-talented”, Baker Boy has them all in abundance. Baker Boy, already a crowd favourite in the Gardens, he brings all these accolades together in native language (Yolngu Matha) and English. This show will be colourful, high energy and yes, inspiring!

Cedric Burnside – As one of the international acts, Cedric is bringing a real sense of Southern USA’s blues to the Botanic Gardens. Bringing a historical lineage though is grandfather (R.L Burnside), and full range of contemporary influences (rock, soul, and funk), there is a real sense of the present while acknowledging the past in the music. Add to that being a talented drummer, singer and guitarist (often in combination) and it is a clear joy to see Cedric as part of his Australian tour.

Charles Maimarosia – For me, this is what WOMADelaide was made for. It feels such a privilege to lie back on the grass at Botanic Park and listen to traditional music brought from the Solomon Islands. Charles is now Melbourne based, but carries his culture with him as he plays guitar, pan-pipes and ukulele to transport us back to his home. 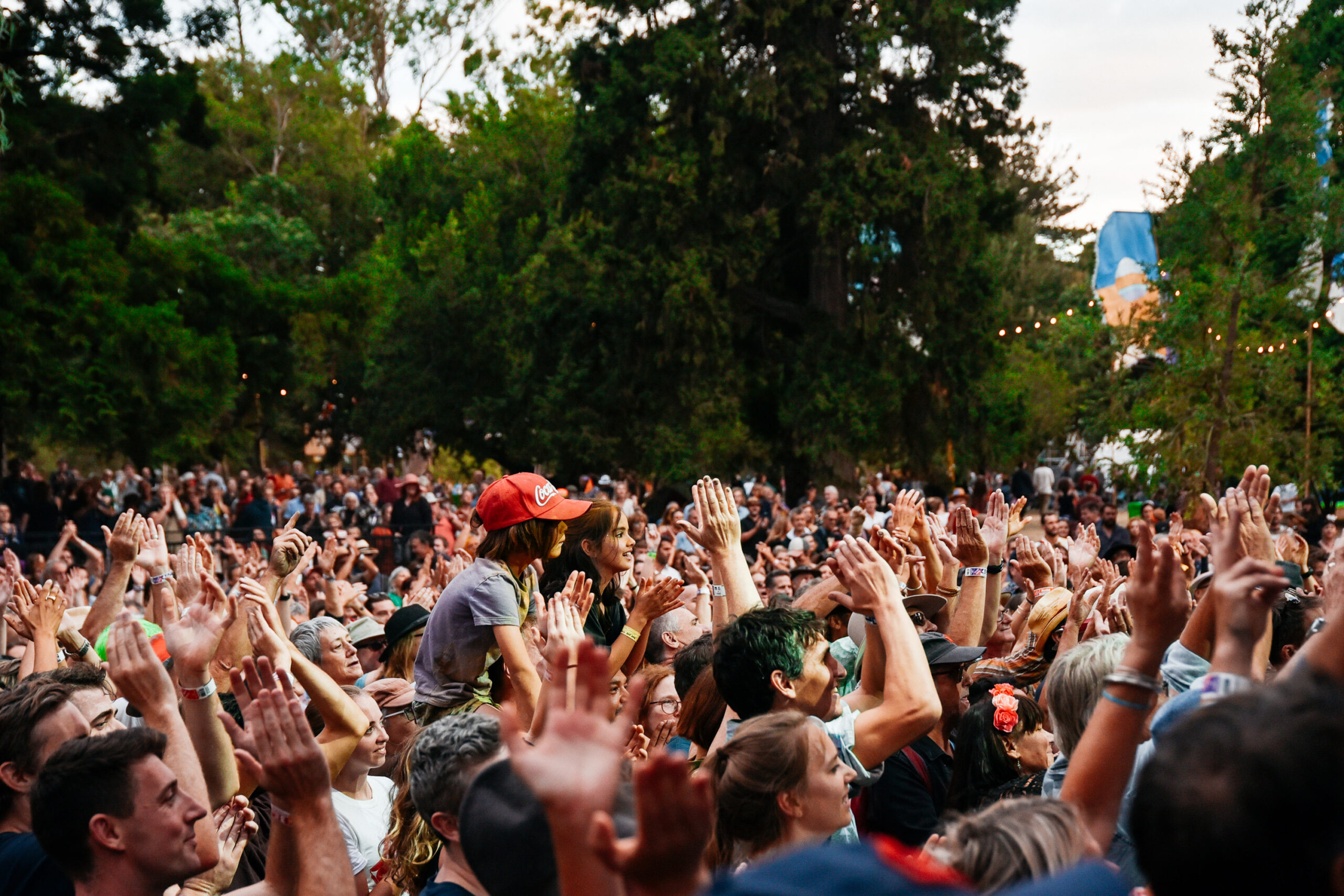 Elephant Sessions – Hailing from Scotland, this fab five are another returning favourite (hooray!). When you think of traditional Celtic music, you generally think of violins, mandolins, reels and the pub… these guys are all those things, and so much more. With a reel (get it?) sense of fun and warmth they are virtuosos of traditional folk music, with power to magnetise. It is no wonder they are travelling the world and enjoying every moment. Come and join them!

Joseph Tawadros w/ the Adelaide Symphony Orchestra – I know it’s not a competition, but I am amazed at how many acts at WOMADelaide have huge members on stage (see YID! and the Melbourne Ska Orchestra). However, this year the prize (there is no prize) is taken by Joseph Tawadros AM, along with the 52 strong Adelaide Symphony Orchestra! Listening to the four-time ARIA winning oud virtuoso will be a real honour. Thankfully, Joseph and brother James will also play a duo show and cook at Taste the World (see below).

Silence –The Adelaide Botanic High School Gym is a new space at the festival this year. David Sharp conducts 22 members of the Adelaide Symphony Orchestra in a performance of Silence which includes nine excerpts from some of classical music’s most beautiful pieces, including Elgar’s Sospiri, Op.70 and Barber’s Adagio of Strings. Played as an early afternoon performance, this is a perfect way to step away from the hubbub of the festival and simply relax.

Taikoz – They may not get the prize (there is still no prize) for the most people on stage, but they would get the one for the most drums and the biggest drums (sadly, still no prize). You will feel every beat of this impressive, high energy drumming troupe. For over 25 years, Taikoz have taken stages by storm, bringing their viscerally felt work to appreciative audiences all over the world. These are not just a must see, but a must feel.

The New Monos – Suited to late morning, early afternoon, late afternoon or evening, this Argentinian/Melbournian (where is home anyway?) collective have been gaining momentum throughout Australia for over five years. They have deservedly been picking up fans at every gig along the way. With many world influences, fused together with South American passion, they are a must see, any time of the day or night! Or both…

Taste the World is one of the festival’s most earthly delights. Such a simple concept – bring people together with food! Hearing WOMADelaide’s artists talk in a relaxed environment (when is cooking for 50+ people not relaxing?!), telling their stories and playing the occasional tune, this is one of my perennial favourites. 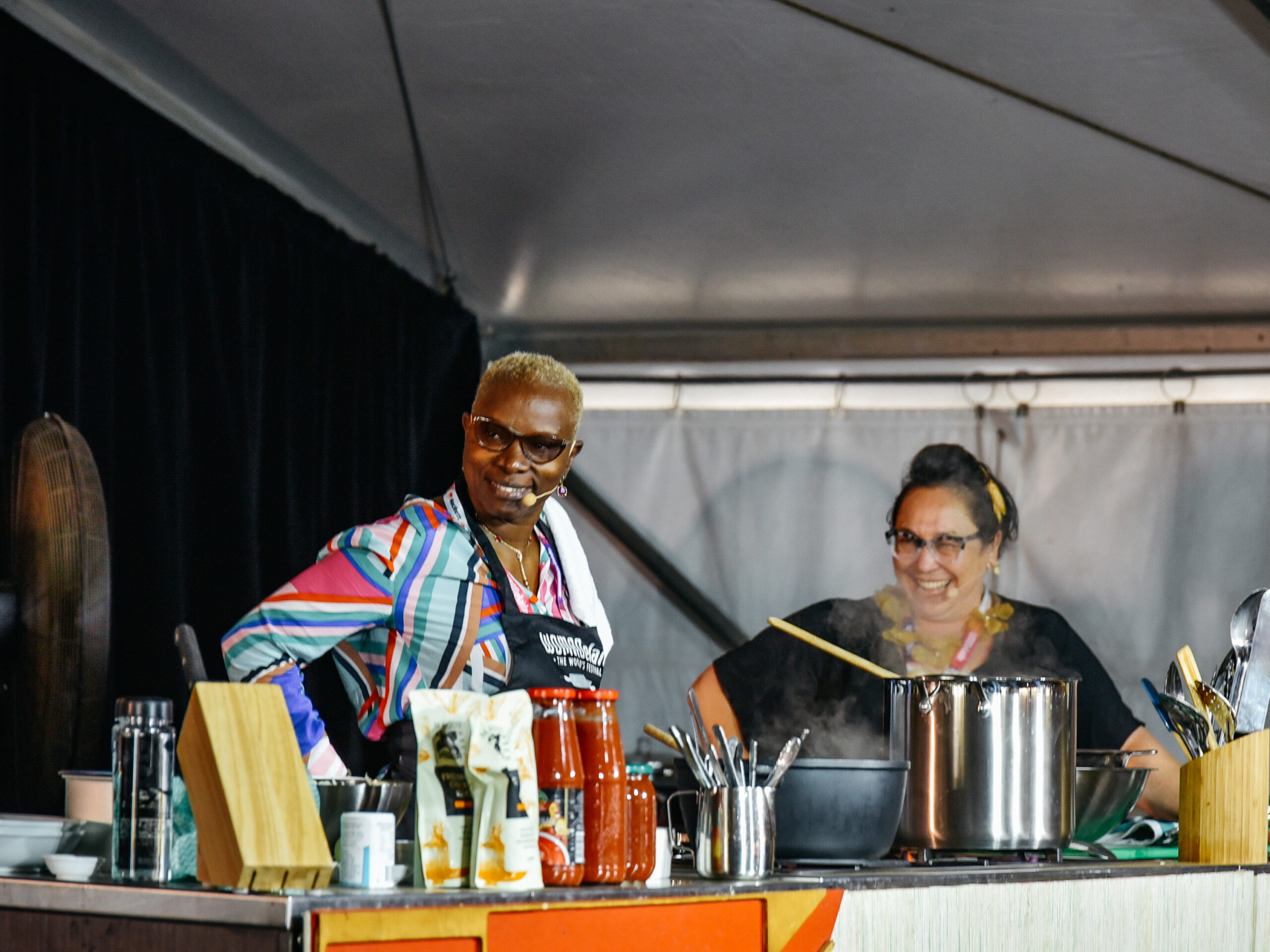 This year there are 14 artists bringing their cuisines and cooking talents to the Taste the World tent. Those demonstrating their (additional) culinary talents include YID!, ZÖJ, Melbourne Ska Orchestra, Marlon X Rulla, Parvyn and Sorong Samari. With so many influences, your taste buds will be singing along with the artists!

Workshops – WOMADelaide is not just about watching, it is about taking part! This is no different and the generous offerings are, as expected, as varied as the acts themselves. So, you just need to ask yourself – do you want to take part in an MC workshop with Roman from Bullhorn? Learn a Cook Islands dance with Te Tangi O Te Ka’ara or understanding Ausecuma Beats’ philosophy behind their West African music? How about an introduction to the Sufi Qawwali tradition with Farhan Shah & Sufi-Oz or enjoy a choreographed dance workshop with power force of Haiku Hands? If you are undecided, you always do them all!

It’s not just about the stages at WOMADelaide! This is the festival where the acts come to you Around the Park! Wandering around the open spaces, you can find curiously disturbing acts such as Cocoloco or more intimate experiences with Restless Dance Theatre. The Memoryologist may seek you out and ask you to contribute your WOMADelaide memories to his project. Setting up temporary exhibitions around the Gardens this year will include cult legends Bush Mechanics and Peter Drew: AUSSIE. Night time is like an event of its own, this year lit up with fire by Kardle Paltendi. 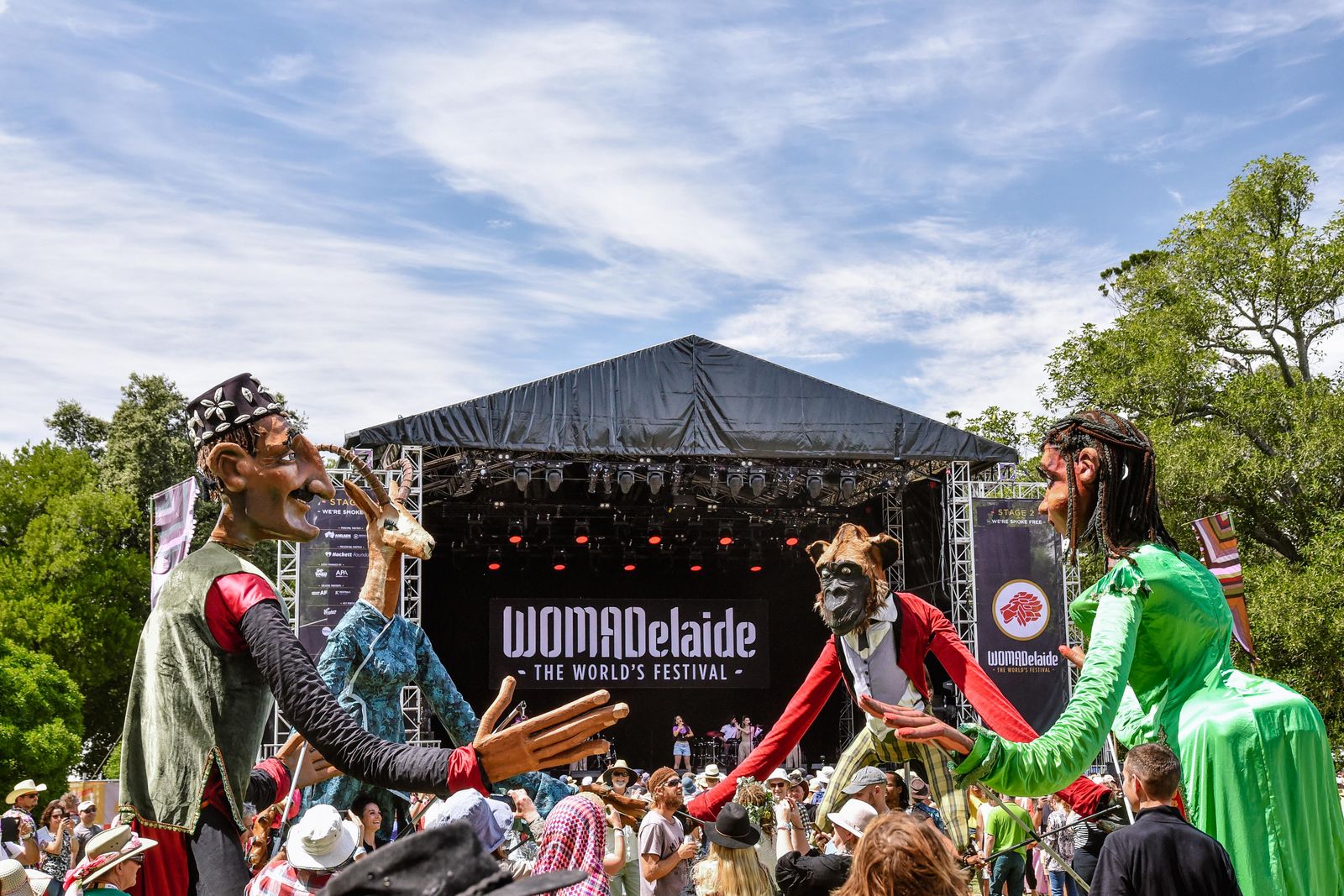 It is simply awe inspiring to see such a collection of so many of Australia’s (and the world’s) most influential and brightest minds, climate movers, progressive thinkers in The Planet Talks. Maybe a ‘WOMAD’ should be the collective term for such a group…? Carefully collated in panels to discuss hot topics such as The Wilderness Myth: How humans can nurture nature, Climate Fighting Farming and Future Forward: Meet the changemakers, these are talks are not to be missed. 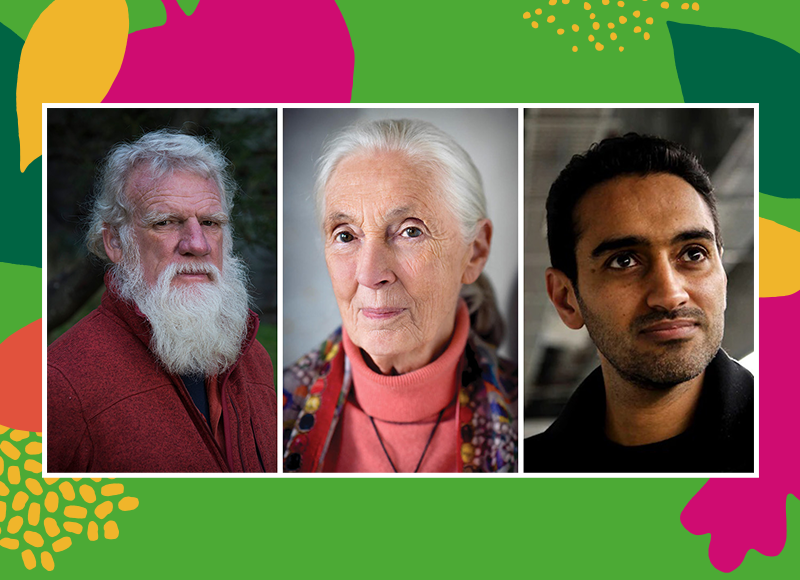 KidZone – Kids having (their own) fun are vital to any family friendly festival, and WOMADelaide is putting them right at the centre. With their own Zone, there is a dedicate space to climb trees, do yoga, read in the book nook (thanks to Adelaide City Library) and, when tired, have a story read to you with AFL legend Eddie Betts! This is the full experience for kids (and maybe adults too…).

Every year, there is so much on offer at WOMADelaide. This year is no different. The Botanic Gardens/Tainmuntilla will be packed to its proverbial rafters with sumptuous sights, staggering stage acts, tantalising talks and of course the fabulous food. You will assured to be kept both thoughtfully and thoroughly entertained for the entire four days. This is truly a festival celebrating the World of Music, Arts and Dance like no other. See you there!

Duncan
Duncan was the most illegible bachelor in town, but times have changed, although he is still a purveyor of Melbourne’s (and Adelaide’s) surprising, quirky, and cultural events.

WOMADelaide runs from March 11-14 2022 at the Botanical Park, Adelaide. With single day/night or multi day passes you can purchase tickets now.
The venue is accessible.

Disclosure: The Plus Ones are invited guests of WOMADelaide.
Images credit: WOMADelaide and Jack Fenby.

The SYNTHONY orchestra delivers the big hits from Sandstorm to Children

Chill Out This Summer With Jam Shed Wine