In Between Tiny Cities  រវាងទីក្រុងតូច choreographed by Nick Power and conducted within a marked circle on the timber floor of the State Theatre’s Rehearsal Room, an audience crowd round its edge to watch two male dancers (Aaron Lim and Erak Mith) at close proximity go into dance combat. In the traditions of street dance, break dance or hip hop, these fit, agile males mirror and partner each other whilst also gunning for competitive response in a tale told via the body and its animation. Backed by live music from Jack Prest, the vibe was up, buoyant, and expressive.

As with the mood, the show, presented by Asia TOPA and Arts Centre Melbourne as part of winter’s First Nations Big World, Up Close(10 July- 1 September),personifies all that is exciting about theatre on the edges. It has an energy, approach and presentation which is unfashioned or commodified, feeling fresh, fly, and engaging. This festival showcases first nations, South East Asia, Africa and Malaysia disapora culture, people and creative work, returning for its third year with six compelling contemporary works with this rough hewn and delicately deft parkour pop up show par excellence as 45 minutes of sweaty performance duelling. 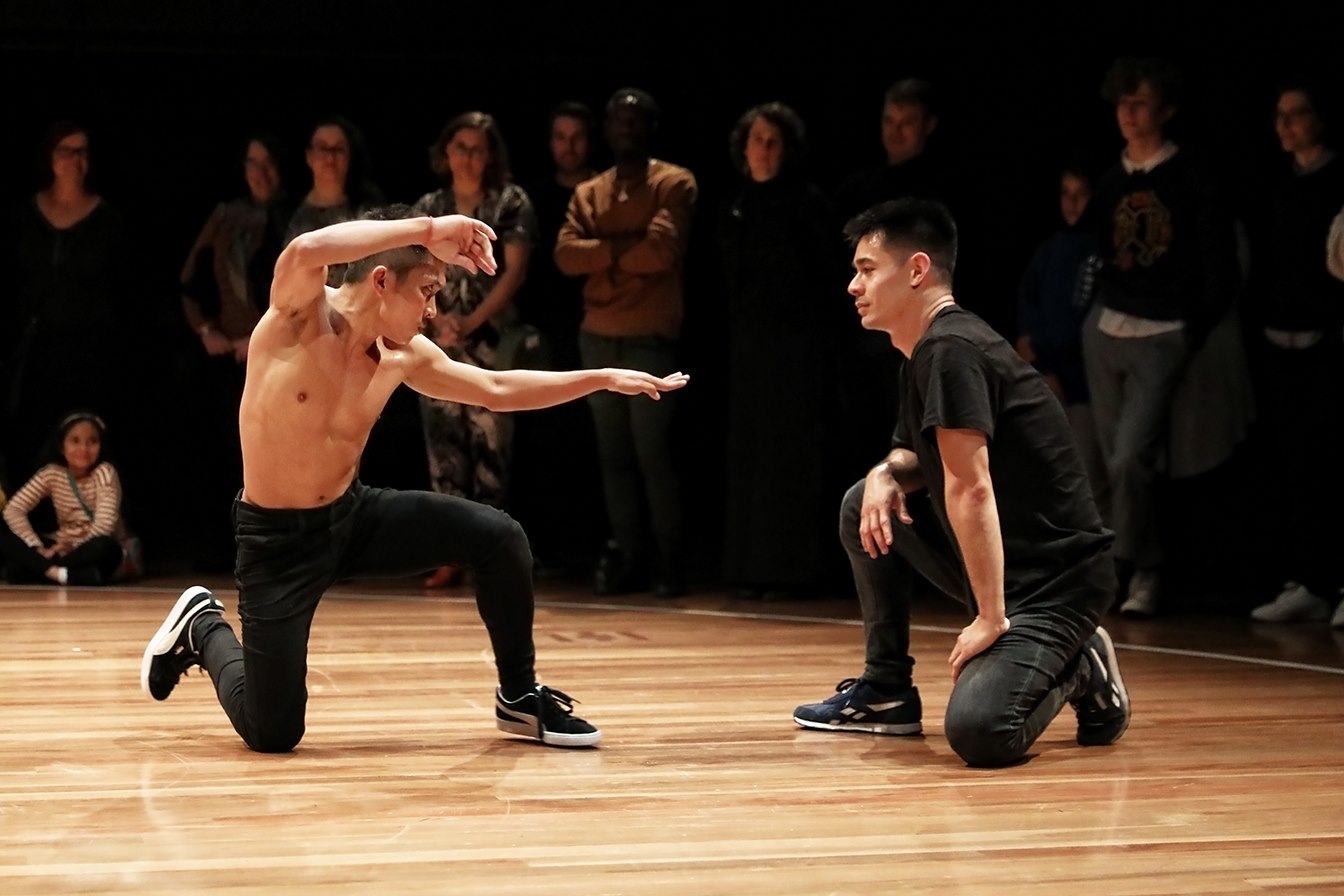 The work is the result of a four-year dance exchange between Darwin’s D*City Rockers and Cambodia’s Tiny Toones youth program. The two crews have travelled, trained, battled and performed together, and Between Tiny Cities រវាងទីក្រុងតូច, is the culmination of that exchange. A mix of improvisation and set work, one b*boy from Phnom Penh, the other from Darwin, clad in uniform black denim with t-shirts and high-step runners, crawl about the space on all fours, sliding and gliding across the surface known to them merely as movement device.

When movement is your language, every surface can be used for self-expression. They crimp, rock, leap, roll, headspin, prowl and parade to our delight and its endlessly fascinating to watch action-based male intimacy, the push, pull, unison, and combat that flows from two beings focussed on each other in space. Their eye contact is the thread between them and never falters. 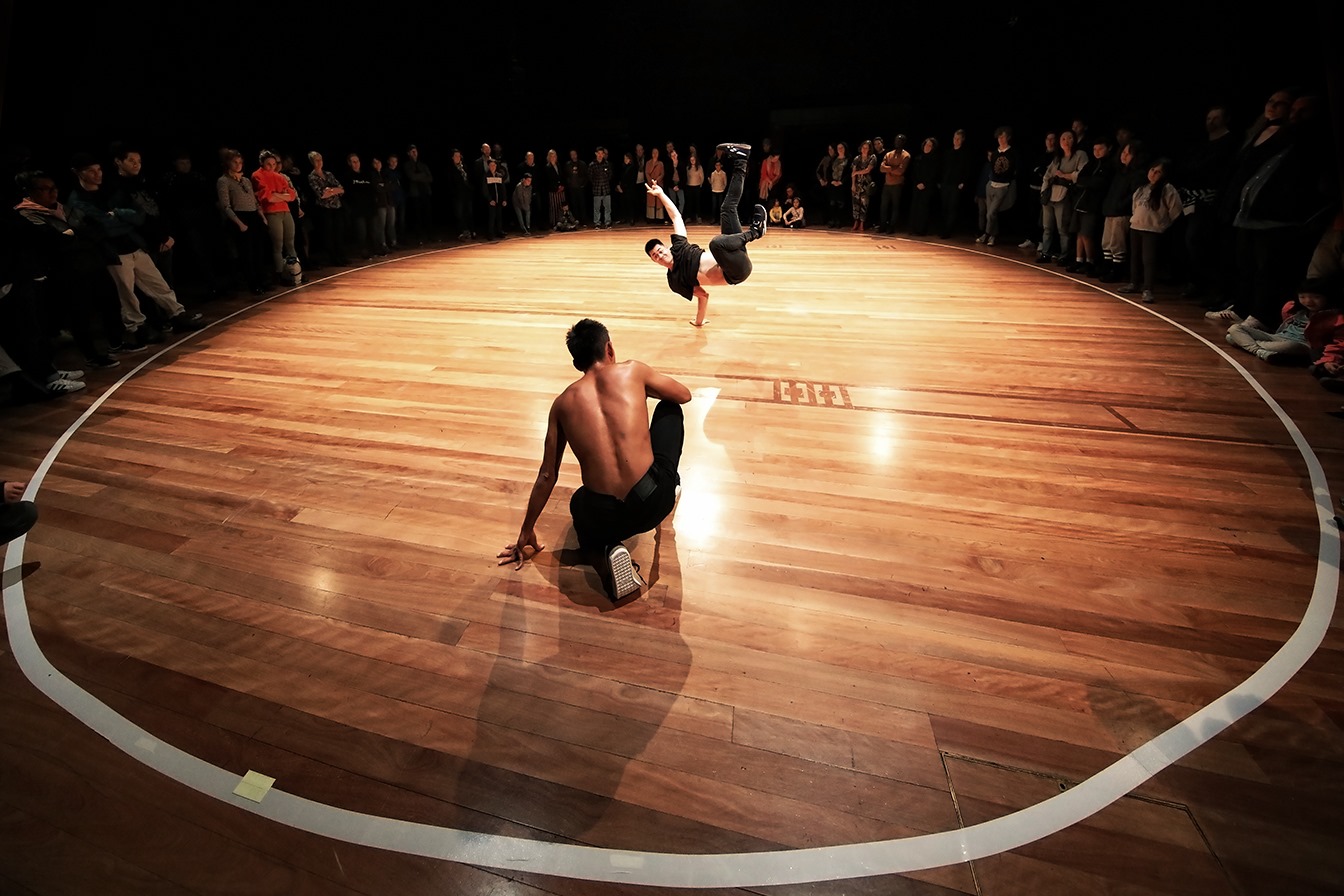 Like a video game animation made 3-D, we watched sweat pour down their faces, every ripple of musculature visible, with ironic facial expression adding to the playful ambiance. At times, there are moments of pure comedy, mime, and gestural articulation. As if standing on a street corner, the audience of all ages- children, uni students, grandparents, parents, youths, across many nationalities – clapped, cheered, smiled and responded to every move.

This is unique modern street-originated theatre which leaves you breathless. You are so close to the action, you can feel the burn of energy that flows across the planes that lie between two sets of eyes peering piercingly at one another. Questions spring to mind as you observe energy made tangible seethe between the two: do you see one body with two heads? Is it two bodies representing one mind? Is man an island? Two beings so alike as to be brothers, why do humans born in different countries go to war? What is the capital that comes between beings when they play and see each other as supports, as mere players in the same universal game?

See it all live and in the flesh in the poetry of b*boys body ballet.

Check out child-friendly school holiday and Festival Events at Big World, Up Close. Follow the adventures of Tiny Toones Cambodia.

Disclosure: The Plus Ones were guests of Arts Centre Melbourne.