Over the school holidays, we watched young people moving.  In NEO- A Triple Bill of New Works, 43 young movers train as professionals, learning the craft of creation as well as the pressures and pleasures of performance working in an international partnership with The National Youth Dance Company Of Scotland. The fruits were visible in energetic movement design, conceptual engagement, storytelling through gesture and motion, and in forging international relationships of a creative kind. It was a nod to an arts future.

A dedicated national pre-professional dance company for young people aged 16-21, Yellow Wheel is headed by Melbourne’s Chunky Move alumni and Transit Dance Director Adam Wheeler, with management from Tasmania’s DRILL Director Joshua Lowe, and uses the specialised dance studios at Lucy Guerin Inc in West Melbourne. Both VCA school of Dance alumni, connections to industry such as these offered by such companies are significant for the next generation of Australian dancemakers. They offer dance learning via internships, workshops, secondary school incursions, and  more, and have produced five major new works and choreographic seasons; participation in Melbourne NOW, Whitenight(2015), and NGV’s Teen Party(2016). 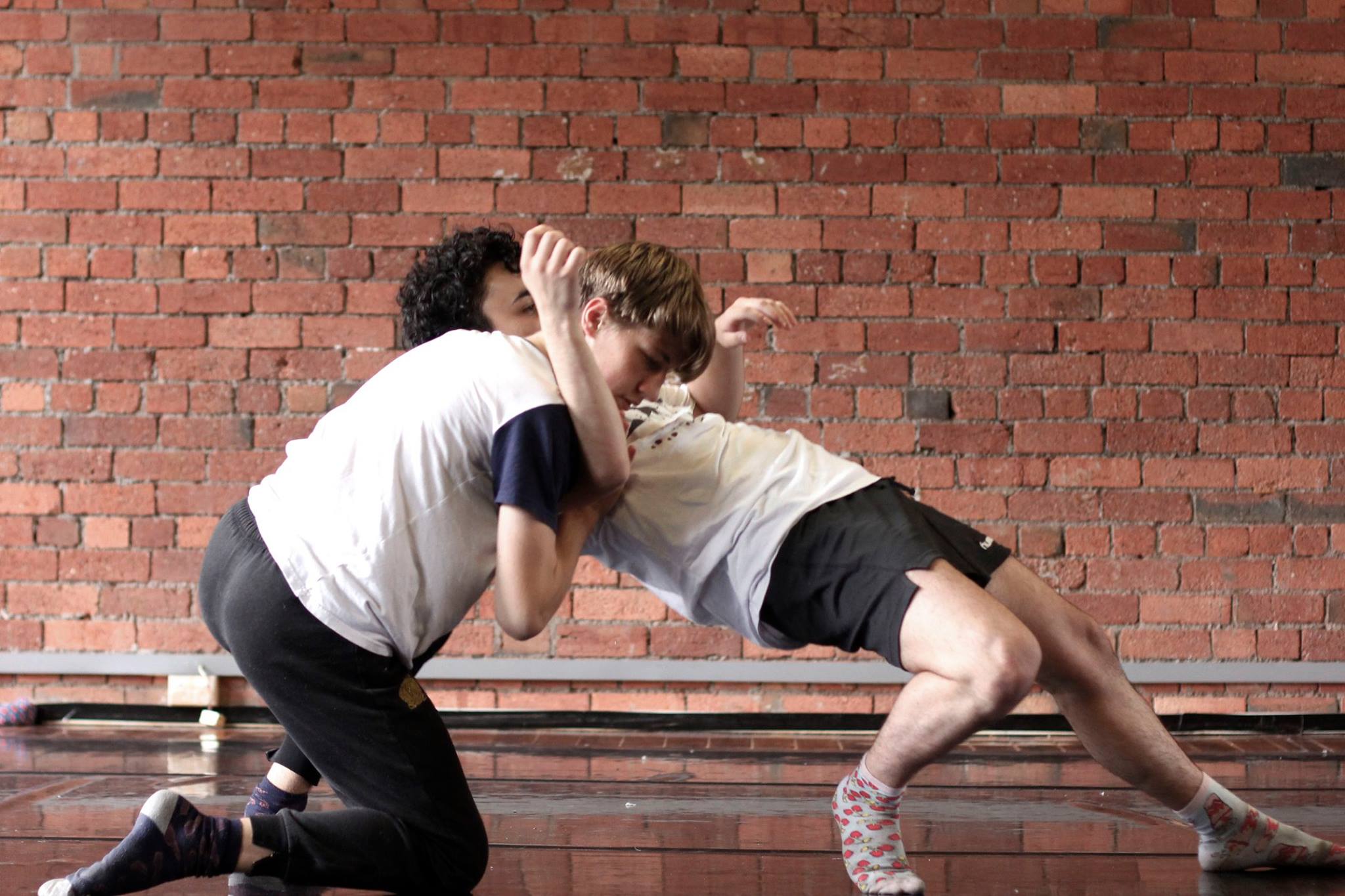 Yellow Wheel in rehearsals for NEO.

This Triple Bill saw works from the individual companies, finishing with a combined work started in Skype rehearsals and finished over an eight day intensive. Melbourne has an esteemed, long-standing tradition of being a dance city, committed to the form as a viable arts practice, and is at the vanguard of contemporary dance practice. It makes sense that we have funded youth companies devoted to dance as a medium for excellence based here. All the way over the other side of the world dance artists such as YDance Director Carolyn Lappin also choose young movers to deliver their ideas. Both YDance and NYDCoS devote themselves to dance education for children and youth.

Wheeler’s I Think My Mother Is  Robot, saw the movers interview their parents about their perceptions of the world in their childhood.  The young dancers are initiated in the concerns of postmodern dance with its focus on anatomical economy, gesture, polity, and the power of group dynamics. Immersion in this practice is an essential induction for anyone aspiring to a career in the form.

21st century Australian dance is fascinated in what makes movement, who moves, and which movement idiom is applied to the body, and in decoding formal dance through analysis of everyday motion and the young dancers are inculcated in these focii via concentrated study. Wheeler also employs technology millenials live with as signs of the world in which they live and headphones are worn by all audience members for the sound for this piece. 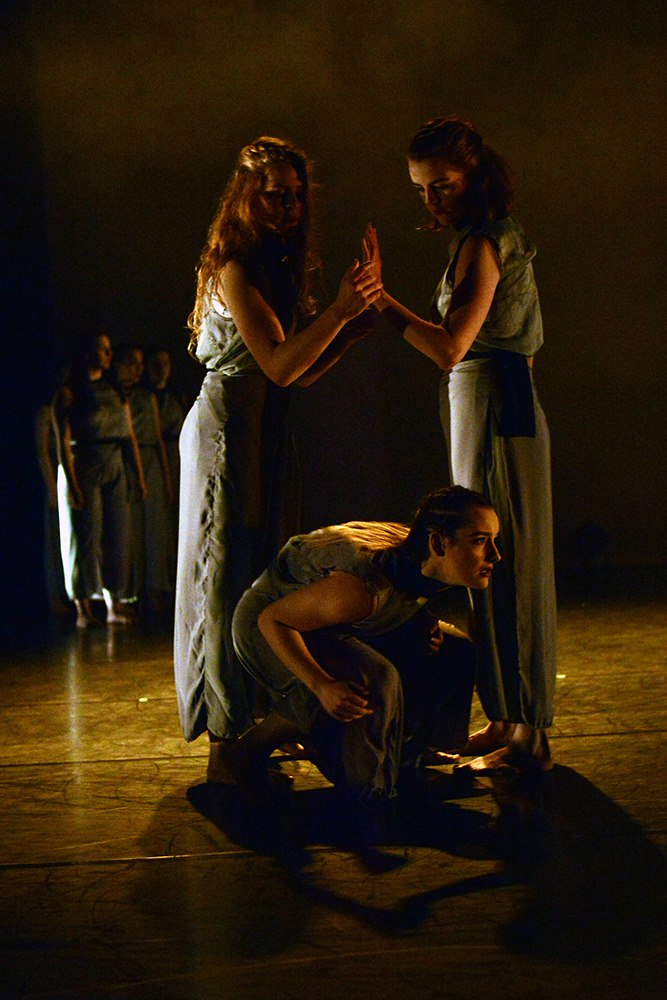 The Scottish work, Di-ver-gent, based on the work of Maya Angelou, had a contrasting focus on the tenets of 20th century modern dance combined with evocative narrative. At times I felt like I were watching a dance adaptation of Australian novelist Hannah Kent’s award-winning Burial Rites, set in pagan Iceland. Its rugged, primal, earthy focus on the power of the individual spirit unbroken also used the actor’s voice. The dancers worked spectacularly well in unison, and explored formal elements with deft attention and polished articulation. It was a bold work that used to best effect lighting, costume and projections in creating an elemental landscape.

The final work saw both dancers united in Neo-Digital Native and was a masterwork equal to any professional adult dance company. With live Djing and in fluro gear, this was a tribal dance gathering of the digital age. Showing the collective, it at times evoked the school yard, with its hallmark social posturing, alienation, group interaction, and play. Figures gathered in clusters, watching, framing, or isolating. Large circles carved the space into geometric huddles as the movers danced arhythmically against the beat of the music. Wheeler stunningly allowed the cast to explore the neutral body’s design and movement in space and time. High-5 hand salutes, ghost-walking and contortion made a new dance style that embodies the joyousness of youth in a group, a spectral shopping mall clan. This work resembled a rave or mass gatherings of groups at Apple stores for a new product release. Referencing the real within the aesthetic is a key feature of Wheeler’s choreography, and Melbourne dance design. 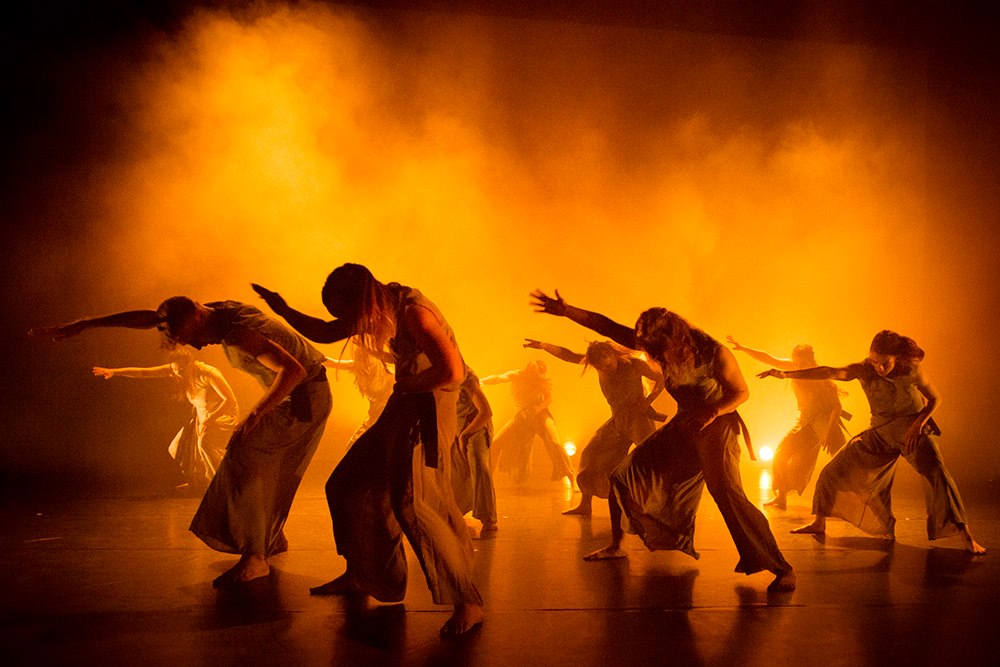 It was great to see the two directors animatedly watched their dancers, off stage, showing the care and passion these dance facilitators hold to welcome the next generation centrestage. Two countries, one youth. One dance world. The inter-country project showed its success as a great learning exchange and exciting performance project. We will enjoy the artistic fruits of such collaborations in the years to follow.

NEO – A Triple Bill Of New Works in partnership with The National Youth Dance Company of Scotland showed 13 April at Meat Market.

Disclosure: The Plus Ones were invited guests of Yellow Wheel.