For years Nintendo have been making the most innovative and creative consoles on the market, and with the launch of the brand new Nintendo Labo they have done something that no one saw coming – made crafting cool. We were lucky enough to attend the media launch party at Melbourne’s Scienceworks (perfect spot for the event) to get our hands on the Labo and see what it’s all about.

So what is Nintendo Labo? Simply put, it’s a huge collection of games, programming software and tools for the Nintendo Switch console that uses cardboard, rubber bands and your imagination to DIY craft and create your own customisable controllers.

When we first found out that this event would last for over four hours we wondered if they would have enough to tell us to cover all that time. We soon found out though that if anything, there was so much more to hear. Here’s what’s making us excited about the Nintendo Labo. 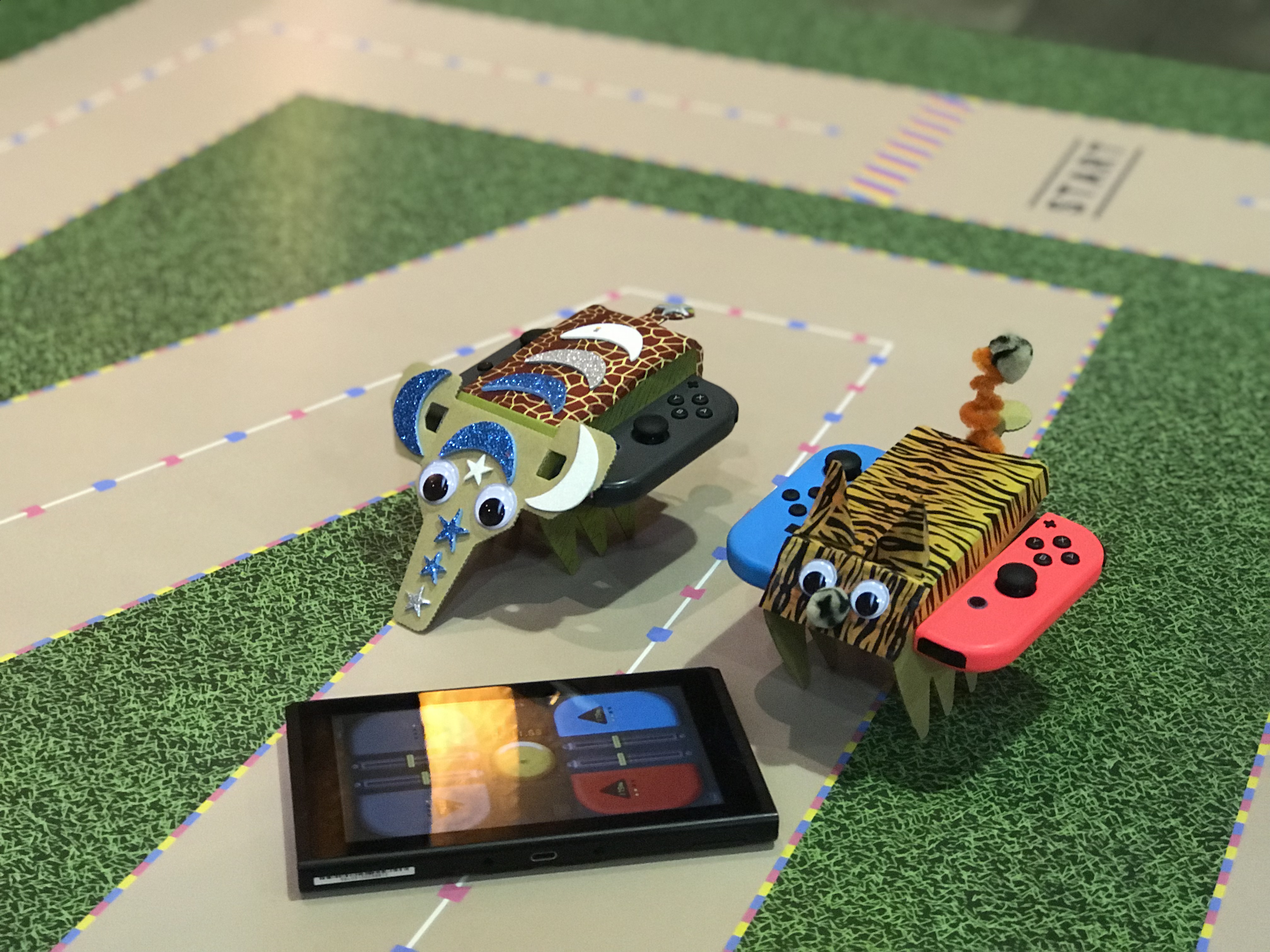 DIY controllers and very unique games
The magic of Labo is how you can craft your own controllers out of only cardboard and the existing Nintendo Switch console. The five-piece variety kit was our first try of the system. First up we spent a nice twenty minutes decorating little toy-con creatures that attach to the Nintendo Switch controllers. Using vibrations caused by the controllers, these toy-cons are capable of moving around, racing or following paths with the IR motion camera.

You can also craft racing wheels for racing games, a working piano synth (that can be programmed to sound different depending on which cardboard pieces are inserted, and even a little fluffy creature that lives in a cardboard house (kids will love it). We were especially impressed with the fishing game, complete with retractable fishing rod and resistant handle.

The console acts as a guide for crafting each creation, as well as an educational tool to show not just how to make each thing, but why it works the way it does. It’s fascinating to watch the instructions and build the pieces step by step. 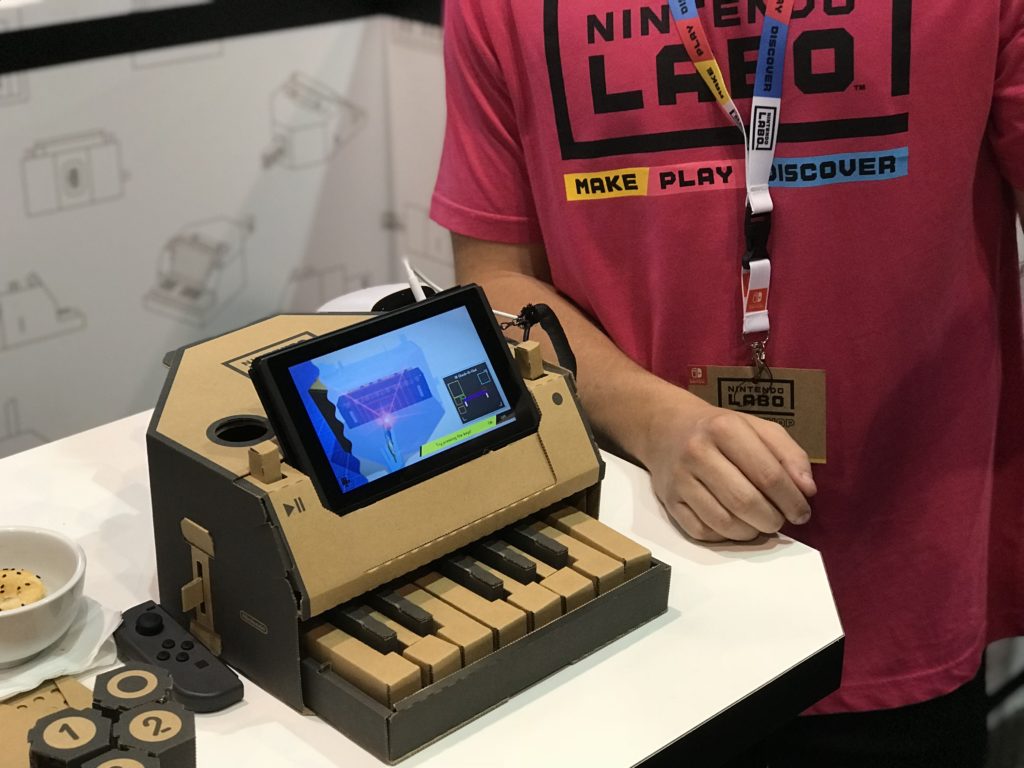 Crafting & making is cool again
While so many new games and consoles are made for a TV screen, Nintendo Labo encourages you to design, play and make a physical object and use it in the real world. Each item can be decorated however you like – we used googly eyes, paint, pens, stickers and more – and we are sure that families will spend hours designing the most beautiful creations.

The software that guides you on how to make each item is very intuitive but also shows you not just how each piece fits together, but why it works the way it does. Young artists will love this just as much as future engineers and scientists. 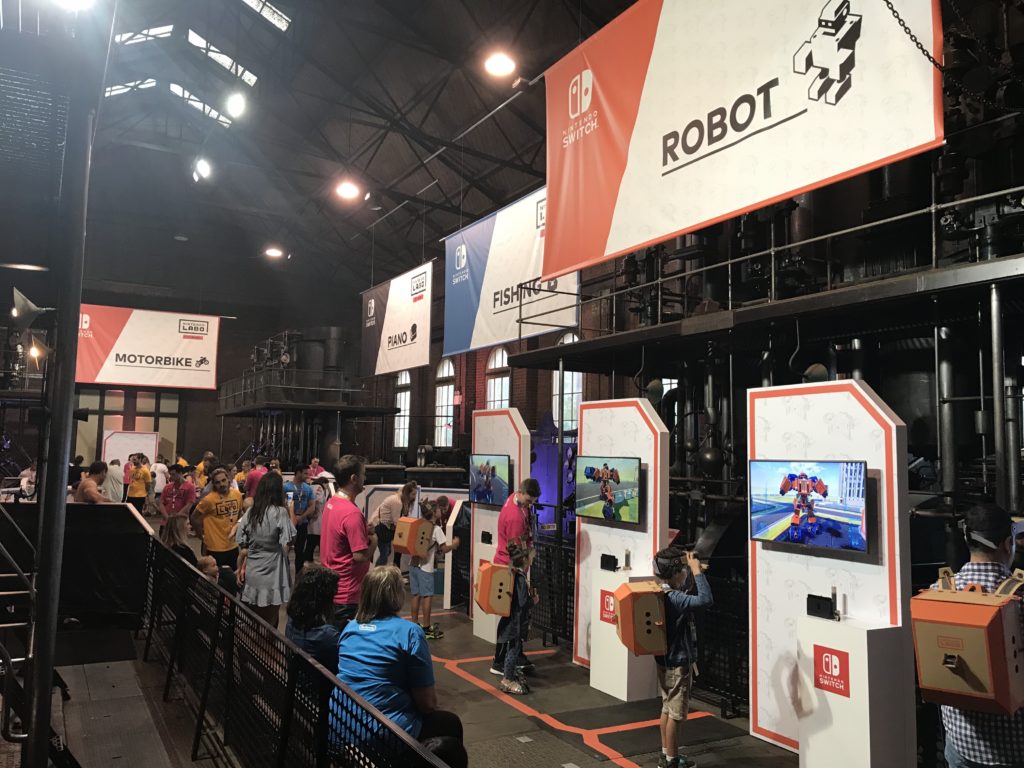 Becoming a huge robot and smashing cities!
Let’s be honest. We have all wondered what it would be like to be a gigantic robot, smashing our way through little tiny cities… or is that just us? We loved the Labo Robot DIY kit. With this one you can build a backpack and visor that lets you control a huge on-screen robot. Then smash buildings, fly around, transform into a tank and much more. The robot backpack goes on your back, while straps attach to your feet and hands. You also get a visor for your head. We were surprised that it fits all sizes so well! We saw people that were 2-meters tall playing this next to 8 year olds.

With the robot suit on, it was time to walk around on-screen as a giant metal droid, flying past buildings and even turn into a tank to break the city apart. With every movement of your body, the robot responds. If you want to walk, you need to walk on the spot. If you want to lift a robot arm, you must do that in real life too. It’s fantastic. 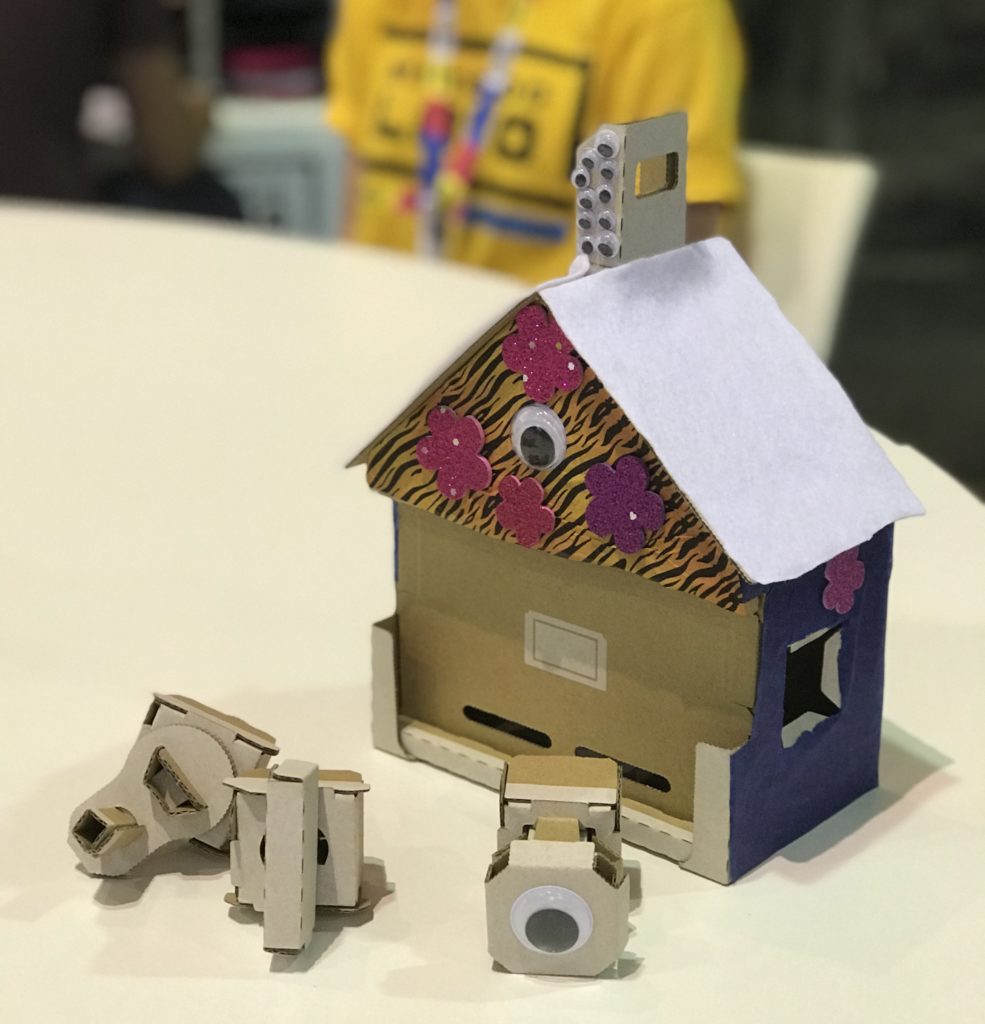 Future inventions from the community
While all these games are great, we can’t wait to see what gets made next… by you!

Part of the joy of Labo is being able to make everything yourself and then play the games using your creation. Nintendo could have left it there and we would have been very satisfied. But they went one step further.

Using a tool on the Switch, young programmers can design their own games and systems that use the many clever features of the console. From what we saw, your imagination is really the only limit in what you could create. Some people have already programmed drum kits, synthesisers, simple robots and so on.

While Nintendo Labo is aimed at children, every adult in the room, including us, had a grin from ear to ear and could easily spend weeks working on our cardboard creations. We can’t wait to see what creative inventions and games people create with the tools provided, and have already been impressed with the artistic works on display. Nintendo once again proves it’s the leader in creative and innovative entertainment and we think Labo will bring a lot of families a whole lot of fun.

Nintendo Labo is available to purchase in Australia from April 25th.
This venue was accessible.

Disclosure: The Plus Ones were invited guests of Harvey PR.
Title image credit: Supplied.
Other images: @TomasZagoda