If I had to do it all again…I wouldn’t change a single thing.. so go the lyrics from one of Melbourne girl Minogue’s early career pop anthems. With this show, commissioned by the 2017 Adelaide Cabaret Festival, co-written with Dean Bryant and presented by Helpmann Award winner Michael Griffiths, these were my very feelings. An intimate night of storytelling-through-song, it tells a combined biography and 30 year sonic career recount of our most petite musical star’s private and professional life and misses nothing. You’ ll hear the songs you grew up to transformed into theatrical treasures! If you’re ready to jump up and sing through the past three decades of your life, this is the show for you.

This show has it all- all the songs you love, superlative singing, a clever script that travels from Charlene’s overalls, through rock goddess rebirth alongside Michael Hutchence, to Australian Olympics success, disco icon, cancer survivor, and all over fashion trendsetter, delivered with Griffith’s humour, sensitivity, and masterful repartee. A seasoned song and piano man, he continues to delight and please with his genre choices and performance excellence, delivering quality works uniquely his own.

Atmospherically strong, we go into the backroom of the pop starlet’s theatrical magic. I could have been in London’s Palladium, a Las Vegas showroom, a smoky bar in Paris, or on the Neighbours set as well as at the recording studios of Stock, Aitken and Waterman. Who ever thought Hand On Your Heart or Confide in Me could sound like classical arias? They do in Griffith’s accomplished hands. A performer who has toured all over the nation and internationally to London, USA, and The Edinburgh Festival, his voice is pitch perfect and accompanied by his relaxed, warmly infectious personal style. Like her, he’s the boy-next-door with so much talent to share. 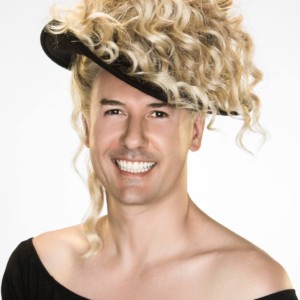 Griffiths has repeated his uniquely stunning recipe for biographical stage shows-made-musical, as with acclaimed past works on Madonna and Annie Lennox. He and Bryant take us through our pop princess’ progression from suburban starlet to international diva through the back catalogue of her songs, album, fashion choices, videos, and media depictions. The show revels in all things Kylie, celebrating both her Aussie faux pas and fairytale duckling-to-swan transformation. Her charm, good looks, flair for self-promotion, cheesy career missteps, roll call of past lovers, managers, and reinventions. The script covers all stages of her glittering career, honouring the artist Minogue, who succeeded in the face of homeland criticism. Griffiths speaks ‘as’ Kylie and has a down-to-earth chat, sense of humour, and love, which celebrates all the things we, and her LGBTIQ community, have long celebrated about her. 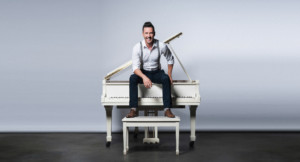 Inside the deliciously decadent interior of capacious fortyfivedownstairs, with glittering, colourful lighting, sits his band, under Musical Director James Simpson. Two guitarists, drums, percussion, and synth, alongside Griffith’s gleaming grand piano, sit ready to transport you into a cabaret setting deluxe. The addition of band is excellent, fleshing out tinny pop songs made for radio into full-bodied musical compositions. To hear her works rendered live by a band is a total highlight and allows you to appreciate the work’s lyrical strength and sheer compositional artistry. Styled tropicana, percussive, high camp and disco jam, her songs are reworked with playing smarts and you experience them in a way you never have before!

Besides singing along to the songs that chart our youth, the show encourages dancing, clapping and audience participation. There are torchsong moments, singalong stops as well as hits such as Can’t Get You Out Of My Head, I Should Be So Lucky and Better The Devil You Know.  With so many classics to choose from, medleys also feature combining Your Disco Needs You, Step Back In Time, Slow, Love At First Sight, and Spinning Around. Even a sexy cover of INXS’ Need You Tonight and a buoyant Dancing Queen are worked in. An opening night incursion from comedian Joel Creasey as Jason Donovan saw the two sing the cheesy duet Especially For You! Finally, you go back to where it all began at the encore, sending shivers down your spine – it was from this town her career sprang. 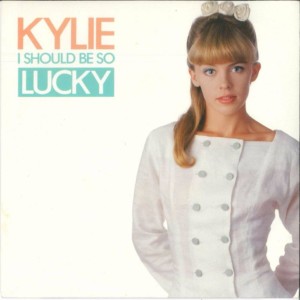 Performers of this calibre continue to amaze home audiences and deserve celebration- both Griffiths’ and Minogue’s. For a limited five show run, there’s no better place for musical trip down memory lane done with such panache! To witness a show this good, it’s you will be so lucky.

Disclosure: The Plus Ones were guests of Midsumma Festival and Michael Griffiths.

culture music queer slider
Dean Bryant fortyfivedownstairs Lucky: Songs By Kylie Melbourne Michael Griffiths midsumma festival The Plus Ones The Plus Ones Melbourne