The opening screening of the new Arts Learning Festival, Shakespeare Republic’s Speaking Daggers, was a fantastic introduction to Australian theatrical output as tool-for-education. The short film was commissioned by the Arts Learning Festival, and the premiere showed the 11-minute short movie. Eight characters from five of his plays, Much Ado About Nothing, Henry IV: Part 1, Othello, Twelfth Night, and Measure For Measure, performed a series of monologues and scenes set in a current-day cafe.

The ACMI-moderated event at the Arts Learning Festival showcased the ambitious product of one of our newest companies producing Shakespeare for everyday consumption, Shakespeare Republic. Their series comprises monologues (across a range of contemporary settings), to bring the words of the greatest writer of the last 500 years in English in bite-sized pieces, for all ages to rediscover and relish.

Starring commercial actors who are household names (Nadine Garner, Scott Major, Michala Banas, Christopher Kirby), it also features theatre actors from across the country. Plus a newbie musician, Jaron Natoli, just 17 years of age and still at school, who nicely framed all the studies as troubadour playing in the background.

These famous monologues or scenes are a fabulous resource for schools. They dress up Shakespeare to the 21st century as well as making him local. Teachers can more easily engage young students with these versions. Students can understand his words in ‘relatable’ ways, as people in their own world — in modern dress, for example. Roleplay also takes part, with females speaking the lines of famous male characters.

Shakespeare’s texts and themes, and even the presentation, can be played by anyone, even streetkids, and he knew that what he created had low- and high-brow references. 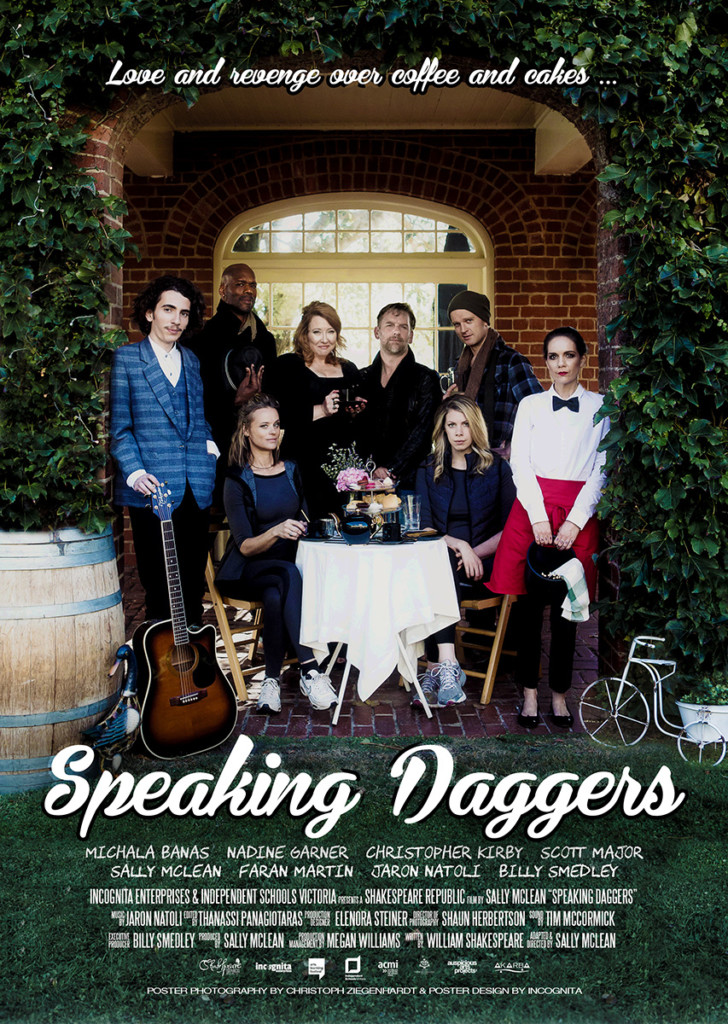 The inaugural Arts Learning Festival was presented by Independent Schools Victoria, the State Government, and Melbourne’s leading cultural institutions (as well as arts practitioners, parents, teachers, and community members). Up to 10,000 people attended workshops and performances across the five-day event. Central to its premise is the link between new knowledge and creativity in education.

For many decades key research has shown that the arts are a medium which has linked disparate fields naturally, since day one of its evolutionary practice. There were many peer- and student-led engagements across this groundbreaking forum, situating the arts front and centre on the knowledge platform, and Speaking Daggers was one shining example.

Speaking Daggers showed at ACMI, with a post-screening Q&A, as part of the Arts Learning Festival, 3-7 May 2017.

Catch Series 3 of the online webseries, Shakespeare Republic, or see their work at The St. Kilda Film Festival on Sunday 21 May, in Q&A for its nomination as ‘Australia’s Favourite Web Series’.

Disclosure: The Plus Ones paying were the guests of Incognita Enterprises and Arts Learning Festival.
Image credit: Shakespeare Republic.

Australian Heritage Festival: ‘Life as a Servant’ at Como House