One of the best things about Good Beer Week is the one-of-a-kind experiences on offer. Case in point: The Garage Project Lab. For one night only, New Zealand brewery Garage Project converted Forester’s Hall into a beer science fair. Considering the team’s reputation for creating weird and wonderful beers, it’s no surprise they were behind one of the most memorable events of the festival.

Things started off normally enough from the crew of ‘mad scientists’. Co-founders Pete Gillespie and Jos Ruffell first introduced us to a selection of six experimental beers. This included samples of Death from Above – inspired by Vietnamese mango salad and made with mango, chili, mint, and lime juice. There was also Chateau Aro – a beer conditioned on pinot noir grape skins and aged in wine barrels that gleeful broke the adage ‘never mix grape and grain.’ Capping off the tasting was the Dark Resonance – with my favourite story of brewing a beer to date.

For their six hundred and sixty sixth batch of beer (666), the team procured a playlist of doom metal, chronologically ordered with no repeats. They then submerged a speaker into the beer and serenaded the yeast with metal music for 11 days. The result was a Black IPA made with the dankest of hops and boasting a 10.3% ABV. 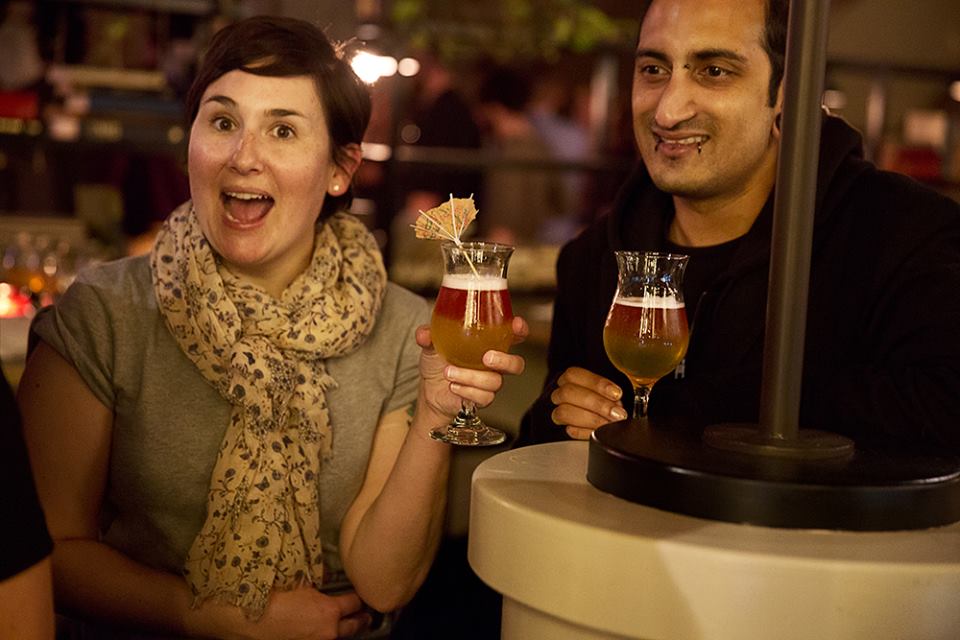 Then things got weird. The brewers broke out the lab coats and safety glasses for some DIY science experiments. We gathered around to watch beer transform into sorbet with the help of liquid nitrogen and tried our hand at freezing marshmallows for a complete reverse of a toasted marshmallow experience.

We were also invited to ‘make a coffee’ by pouring Garage Project’s cream ale over a coffee stout to create a ‘flat white’. (The result was greater than the sum of the two parts and unlike any coffee beer I’d tasted before.) There was also the most-photographed drink of the night – a layered red, yellow, and green traffic light beer topped off with a cocktail umbrella.

Gillespie expressed his enjoyment of the beer brewing process, stating that with beer ‘anything goes.’ He asked – why give people something they can walk into a bar and have on any Friday night? The Garage Project Lab at Foresters was true to GP’s style, as even the experimental brewers admitted they’ve ‘never done anything quite like this before’.

Forester’s Hall is the New Zealand Pint of Origin during Good Beer Week. The bar is serving some choice Kiwi beers as well as showcasing brewers from across the ditch for events including NZ Brewer Speed Dating and Wellington Takes Over Collingwood. The pub also regularly hosts talk and tasting events on Tuesday nights.

Read our guide to Good Beer Week for all the best events to go to, and read all our reviews.

Disclosure: The Plus Ones were invited guests of Foresters.
Image credit: Good Beer Week.

Shhhh! Want it in a secret? It’s musician Bradley Stone.

Australian Heritage Festival: ‘Life as a Servant’ at Como House