Riot Stage, the production company behind ‘F.‘, is a youth theatre company that gives kids access to the arts and tells their stories through performance. ‘F.’ addresses what it is like to be a teenager in this day and age. How do you navigate the information overload that Google offers? How do you know which way is the right way when it comes to love, sex and dating? When do you say ‘yes’ and when do you say ‘no’? What is real, what is fake and who can you trust when digital exposure and humiliation is just a post away?

More eyes are on these kids than ever before and they know it and suffer the consequences. Often today’s teens are accused of heightened levels of narcissism. But is there even a choice in the matter when it is human nature to try and fit in and never do we seek acceptance as much as we do when we are in that vulnerable age group. 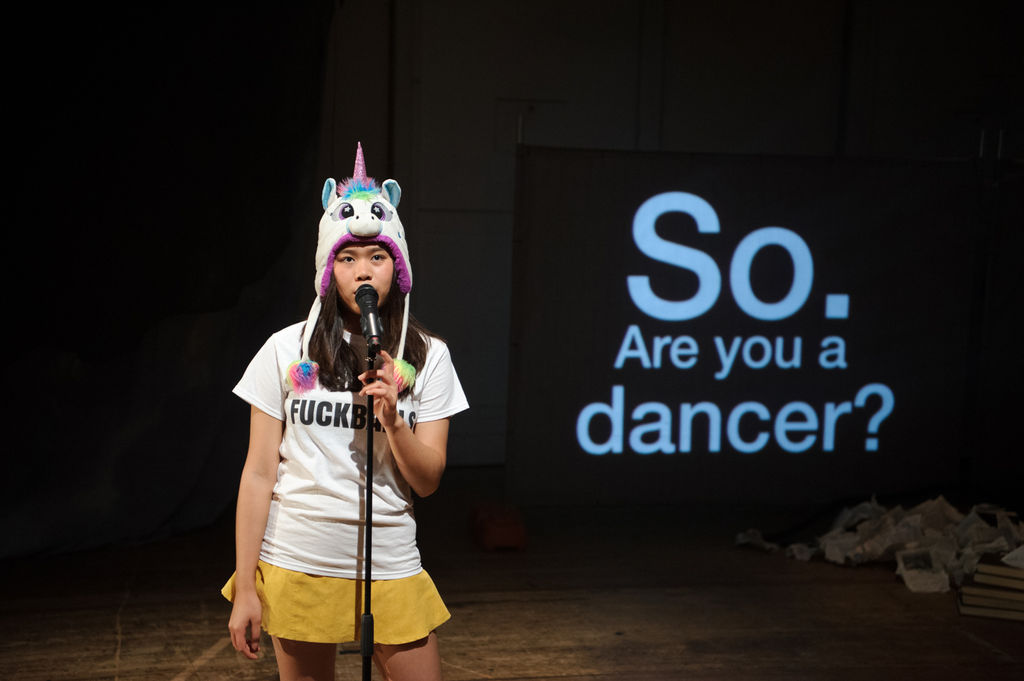 Teenagers these days are exposed to a lot of stimulus thanks to the Internet and smartphones. It’s been a bit of a topic of conversation among friends recently in the wake of talks we attended for International Girls Day where ‘sexting’ and consent were huge topics.

I am an 80s kid — we did have the internet, but watching a video online meant patiently waiting in front of the sloth-like PC for at least 30 minutes at a time while the modem dialed up (how my classmates managed to watch porn on the library computer is still a mystery to me). The one time I sent my boyfriend a sexy pic he deleted it right away because he was terrified that his housemates might find it on the one PC in the lounge that they all shared. I didn’t have a mobile phone until I was 18, my first smartphone came at age 28. So yeah, a far cry from spending my teens with YouTube celebrities, Snapchat, and Facebook. 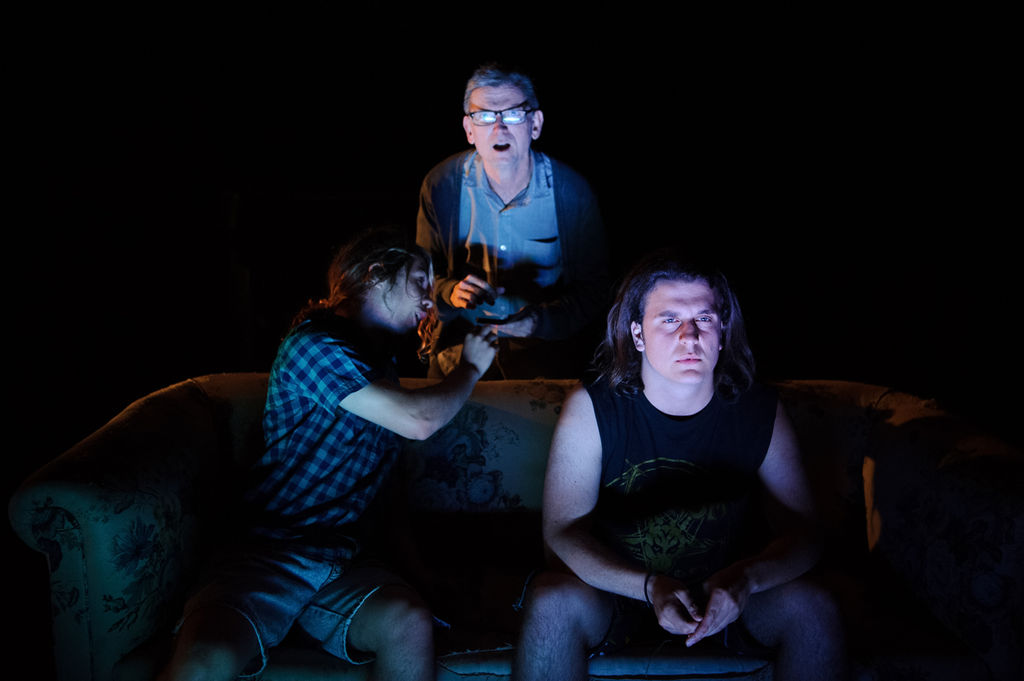 The Riot Stage kids were amazing and delivered an incredibly authentic and raw depiction of what it means to be a millennial. Other than one mature actor who embraced the role of a parent, all performers were teenagers – guys and girls in even numbers. One character is an accidental YouTube sensation, another is an intentional one. A girl receives unsolicited dick picks but not the conversation and validation she clearly longs for.  A young couple fumbles its way towards a fragile first relationship, but they crumble when the girl doesn’t know how to say ‘no’ and faces her first bout of depression. One guy can’t decide what his sexual orientation is and is shocked by how little his family seems to care either way, while his best friend and tough guy discovers he finds comfort and community in ‘My Little Pony’.

‘F.’ walks a fine line between humour and social commentary. It appears that the kids had a huge input in the plot and I would bet a lot of improv went into the creation of many key scenes. Kudos to director Katrina Cornwell and writer Morgan Rose for creating something with the cast and crew that really has it’s finger on the pulse of time. The integration of lighting, sound and digital projection was superb and captured the dual worlds of the lifes lived in the ‘real’ world and those lived online. 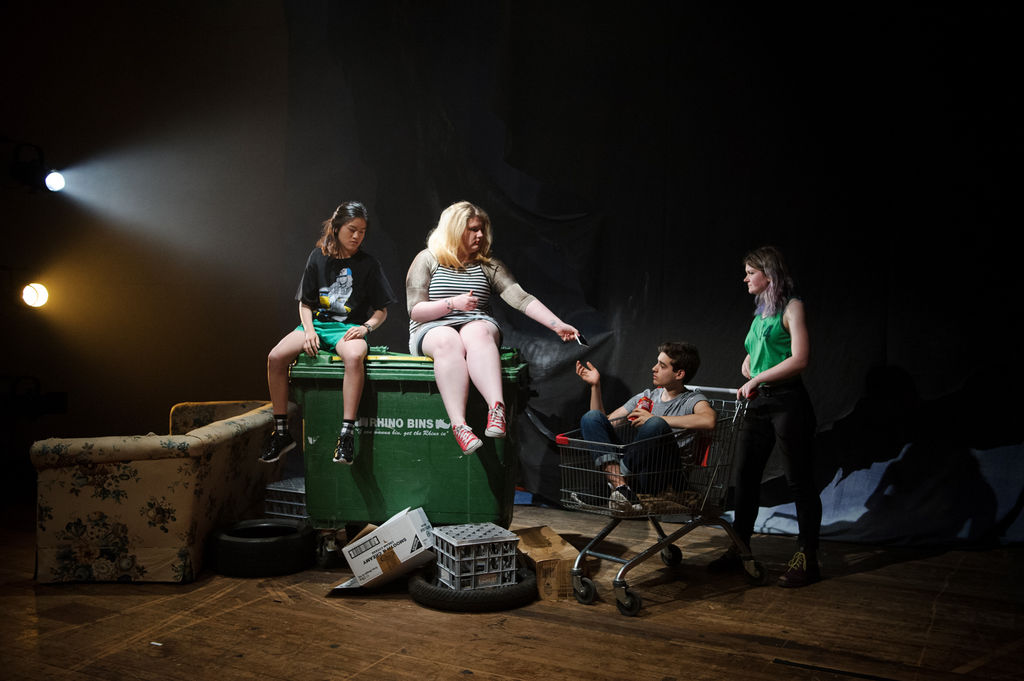 What I loved most was how multi-faceted this play was. As an ‘adult’ looking in I could see some issues on which I have a lot more clarity now, but at the same time the play rightly points out that many things will stay just as confusing and these kids have a good idea about that already. Our behaviours as individual human beings are pretty well formed already when we hit puberty and while our teens are considered formative years, the parent in this play makes the poignant comment that things that were shit back then still feel pretty shit now.

My plus one and I delved straight into a deep and meaningful conversation after the show and both agreed that we were fully engaged and entertained throughout the whole 75 minutes. I urge you other ‘adults’ to go and see this play. You might learn something.

‘F.’ runs from 30 November–11 December 2016 at Trades Hall, The New Ballroom as part of the Poppy Seed Festival.

To find out about F. and other plays that are part of the Poppy Seed Festival visit www.poppyseedfestival.com/season-2016.

Disclosure: The Plus Ones were invited guests of Starling Communications.
Image credit: Sarah Walker.

Best of December 2016: how to make the most of your last month of the year