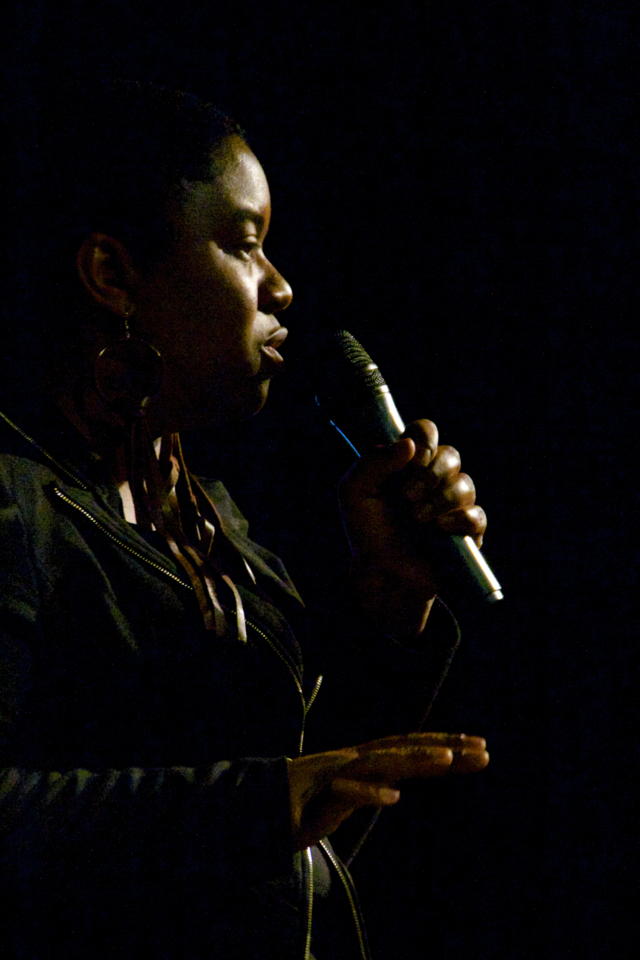 There were two consecutive 45-minute shows which had people bustling through the door trying to get their hands on a last minute ticket. (Waiting in line at the box office, a woman semi-jokingly suggested that I could sell her my ticket if the show were sold out.) The venue was packed and I can’t say that I was too excited about standing for the duration of the poem. However, caught up in the powerful performance the time flew by. I wandered out onto the street hungry for some more spontaneous prose and jazz beats.

Following the seven-piece band to the stage, Clarke stepped forward, centered herself, and boldly spoke the opening lines of Allen Ginsberg’s poem, ‘Howl’. Archer conducted from his seat at the keyboard at the left of the stage, and I enjoyed watching his hands indicate a coming change in the music or pace of the poem. Music and poetry tend to meld together exceptionally well, and the combination on stage last night was exciting and intense. There were times I felt myself straining to hear Ginsberg’s words, but the rhythm and shape of the poem was carried beautifully by Clarke. Her lush and powerful voice carried us gently through the last stanzas of Part I before the lights went out, clapping ensued, a pause, and then the sudden exclamation of ‘Murloch’ brought us back into the howling madness.

At times, the music held the poem in the palm of its hand; the crescendos, the ominous tones, the coupling of strings, the groaning saxophone solo. Clarke’s voice is a wonderfully trained instrument in itself. A patron to the stage, she held the audience captive. Encouraging us to sing the opening lines of the Footnote To Howl together, the crowd timidly accepted Clarke’s dare.

Holy, holy, holy! To see the passion and love, the wild chaos and fearless confessions of Ginsberg’s ‘Howl’ brought to life on stage here in Melbourne really was something special.

-Lisa
Lisa Martin is currently wound up in the windmills of life, and spends her downtime reading, writing and singing. Someday she hopes to fly in a hot air balloon with some poodles and fine wine.

Maxine Benebe Clarke’s memoir The Hate Race will be published in August 2016 and her first children’s book The Patchwork Bike will be released in November 2016.

‘A Very Modern Marriage’ at The Owl & Cat Theatre in Richmond