The latest instalment of the Korean Film Festival kicks off September 3rd in Melbourne with a great program of 20 feature films and a range of quirky activities that definitely speak to the unique culture of Korea. Upload a picture of your pet with the hashtag #KOFFIA2015 to win seats to the opening film How to Steal a Dog, or come dressed in your pjs or a onesie at Love Forecast to join in a pillow fight or win a prize. But don’t miss out on all the top quality films. Here are our top five picks. 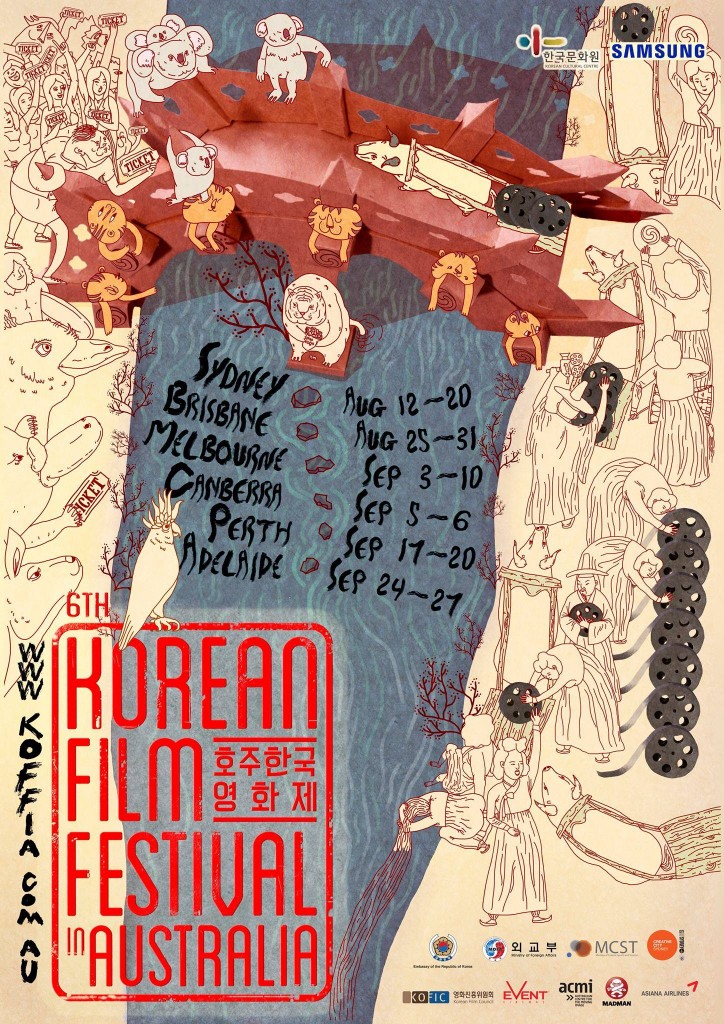 Gangnam Blues
No, this is not about inane synchronised dancing, rather the southern area of Seoul (Gangnam) during the 1970s, when development and political corruption walked hand in hand. The film follows the story of childhood friends Jong-dae and Yong-ki whose struggles in life are heightened after their homes are demolished by local thugs and they get involved in violent political clashes. Separated in one such skirmish, their lives go separate directions – Jong-dae becoming an honest man and Yong-ki part of Seoul’s most powerful criminal organisation. An epic gangster tale where old allegiances and new fights for survival are put to the test.

My Dictator
This film is set in 1972, when re-unification was attempted after the July 4th North-South Joint Statement. Preparing for what is to be the first inter-Korean Summit, South Korea sets up a secret project to predict the movements of North Korea’s reclusive leader Kim Il-sung, using a body double to simulate his every move – the way he acts, speaks and even thinks. After the summit is cancelled, would-be body double Sung-geun can’t shake the act and his frustrated son leaves calls it quits on him, leaving him for the next 20 years in a nursing home. But when loan sharks are chasing his son, he is forced to visit in the hope that his house could solve his problems.

Tazza: The Hidden Card
Gambling: a common theme it seems in Korea, but this film will take you on a thrilling ride into the life of Dae-gil, a young player with a quick mind, street smarts and natural skill. When he meets his dream girl Mi-na, life is looking like an endless climb up for the debut gambler – until he becomes the scapegoat for a major conspiracy plot. Forced to regroup and lick his deep wounds, Dae-gil plans an even bigger get-back scheme that will cost everything, even his own life, if he loses.

Cart
Working as a casual assistant in a large retail store, Sun-hee is struggling to feed her two children and gain permanent employment. Unable to afford the luxuries her son wants, things start to look better when she is about to become a permanent staff member. But when the company she works for is suddenly merged, and they are looking to avoid paying benefits to the existing staff, she and her co-workers lose their jobs overnight. A normally timid woman, Sun-hee speaks up and rallies the other women together to launch a strike, gaining new respect from her son as she fights for what she believes is right. But will it work?

Madonna
A fascinating film set in an exclusive private hospital where an elderly patient – and the hospital’s main benefactor – lies comatose, in need of a new heart. Having kept him alive for the last 10 years, his son Sang-woo calls on nurse Hae-rim to approach the family of a brain-dead woman to donate hers for his survival. But as she delves deep into the life of the woman, nicknamed ‘Madonna’, she uncovers a life of sorrow. Bullied as a student, manipulated as an office worker, and then left beaten up and ready for death as a prostitute on the side of the road, her journey will leave you gasping for air. Take some tissues.

– Collette
Collette Swindells is currently nursing blistered feet after somewhat excessive training for the upcoming Melbourne Marathon. When she is not causing such self-harm, you can find her sewing up a storm from her Brunswick studio for her Melbourne-made sustainable maternity wear label AYLA Maternity.

The Korean Film Festival in Australia runs from 3 – 10 September 2015 in Melbourne. Check out the full program and book your tickets now!

Disclosure: The Plus Ones are invited guests of the Korean Film Festival.