When you enter the venue you enter the show already. The cast of Production Comedy ‘A Slightly Isolated Dog’ roams S&M’s introducing themselves and being very inviting. They develop storylines with the audience as we unwittingly become part of the show.

This early audience interaction ensures they’ve built a relationship with the audience which helps even the most shy member respond. It also ensures that in moments of resetting the room between scenes with props and character changes that they can distract us easily. The relationships they build with us are full of the staples of relationships, broken hearts, love, proposals and cheating. They provide a light look at the love in an extreme hilarious way.

In fact the audience are occasionally props and characters themselves, so get ready in this show to not just watch but to become an essential noisemakers, statues, wavers, storm-creaters, doorknockers and more. 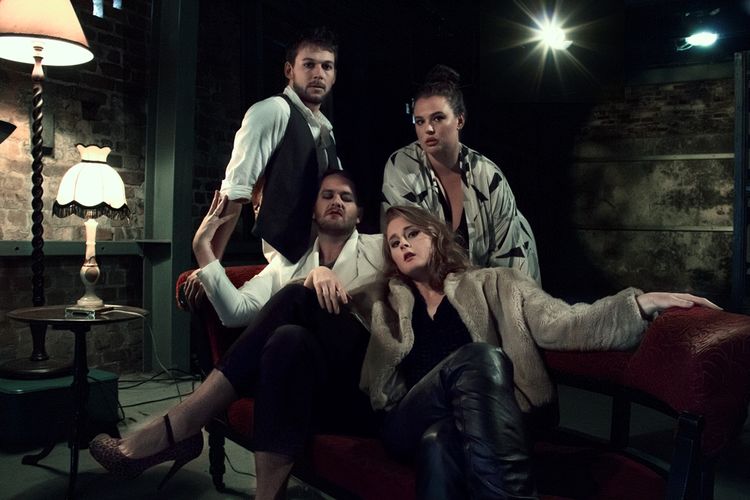 The smouldering cast of Don Juan

The acting is highly exaggerated, the accents overblown, everything is designed to be almost a caricature of the characters portrayed. They capture your imagination as they energetically dash around the stage. I find myself laughing uproariously at their antics and their charisma despite the clumsily put together storyline that barely holds the show together.

The characters carry the action but the actors change characters constantly through the show. Don Juan is played by every cast member at sometime or other. You’d think this would make it chaotic to follow but the repetition of set ups and jokes makes it easy to follow.

Scattered in amongst the action are snippets of musical numbers by cast members with serious talent, from beautiful and haunting melodies to fun pop numbers. It’s a pity that the musical numbers seemed so randomly scattered, not moving the plot along used as more of a soundtrack to the action than anything more. I would have like to see them used purposefully instead.

Overall this is a fun night out, requiring no thinking, merely to engage your imagination, give into their instruction and prepare to fall in love.

Don Juan plays in Wellington until Sunday 4th of December.  S &M’s will host the show most nights, but watch out for the surprise venue nights! Including Old Saint Pauls and Bodega. For tickets and information visit Eventfinder. You can also follow the performers antics on A Slightly Isolated Dog’s Facebook Page.

Disclaimer: The Plus Ones Wellington were invited guests of A Slightly Isolated Dog

A Kind of Magic at BATS