The Big Hoo-Haa are a Melbourne improvised comedy institution: whilst they can usually be found on a Friday night at The Butterfly Club they have returned to the Melbourne Town Hall for the Melbourne International Comedy Festival 2019.

For those who are unfamiliar with the concept of improvised comedy, here’s a little break-down: Two teams of talented comedians have to battle it out on stage through various rounds of games using cues from the audience. Nothing is scripted and everything is made up on the spot. Points are handed out based on audience feedback. The result is reliably hilarious and random.

To add a little twist to their usual format, The Big Hoo-Haa are doing themed nights for the festival: think spooky, sexy or an entire night performed as a musical. On their (spooky) opening night highlights included scenes acted out based on quotes from scary movies (“I know what your insides look like!”), a song complete with impromptu dance performance titled: We must let go of the dreams of the living, and an entire musical scene set in an old manor house, performed by skeletons in fear of loosing their head to their mad master. If all this sounds a little… well nuts, you are starting to get a taste of the improvised comedic gold that is The Big Hoo-Haa. The troupe has been around for 8 years and boasts an impressive ensemble of comedians who are more than fast on their feet and know how to turn the most mundane things into laughter. 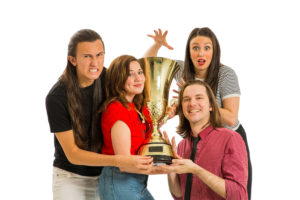 There are two more Monday night shows to go so be quick as this will likely sell out. If you miss them this time, you should definitely check them out at The Butterfly Club on a Friday. Every show is completely unique, razor sharp and guaranteed to bring you to tears (in a good way).

In addition to their special Comedy Festival show, The Big HOO HAA also performs every Friday night at The Butterfly Club.

Disclosure: The Plus Ones were invited guests of The Big Hoo-Haa
Image credits: Mark Gambino

– Claudia
Claudia B. is a German/Kiwi graphic designer and illustrator who has been living and working in Melbourne for the last six years. She enjoys a good glass of scotch and the occasional pole dancing class. Claudia also helps donate proceeds from www.notthispussy.com.au to charities in support of women’s rights, refugees and climate change.

View all posts by claudiabergsdorf →

Get your Brit on in Tudors To Windsors: British Royal Portraits at Bendigo Art Gallery