Australia’s most famous contemporary playwright, David Williamson returns to his theatre roots and renders a heroine for the times in Credentials, premiering for La Mama Theatre’s 50th anniversary. Invited by Artistic Director Liz Jones to present a commemorative work, Williamson grabbed the opportunity to have his NSW play show itself to our gaze.

As a fledgling stage writer, this venue supported his earliest plays with The Coming Of Stork, The Removalists, and The Club shown at this little terrace house theatre that birthed so many national greats.

Williamson’s works focusses on our people and their concerns in the here and now. In nuggety types battling tough circumstances, with inflections of class. His ear for Aussie speech is pitch perfect. This is realism that’s so familiar, it’s as if we’re in these people’s private thoughts. Sometimes, it’s uncomfortable being there. 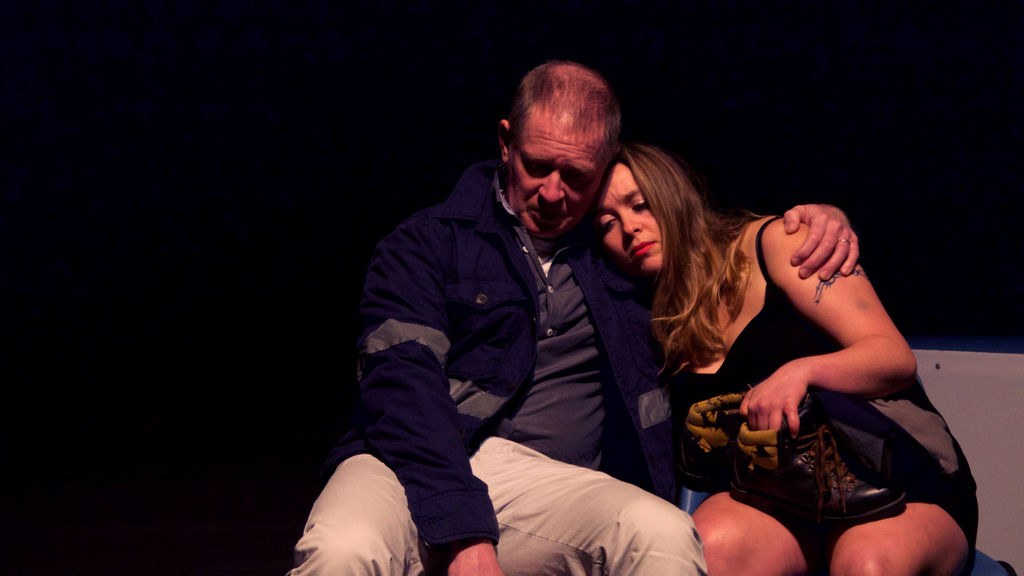 Starting as a story interrogating the use of false qualifications, it switches between the histories of two families with female children, essentially concerning the relationships between fathers and daughters. One, a poor country girl who escapes childhood sexual abuse and an unhappy home life; the other, a Sydney rich kid who enrols in endless courses in her quest for identity. It’s also about parental expectations and generational differences, and the job landscape and meagre choices younger generations today face.

The sets of bus depots, apartments, private homes, the street, and the workplace are so real, we can’t look away. There is nowhere to escape the deep and dark content depicted on them, as with our lives. It is the decisions these caught characters make which drive the narrative.

The human struggle for meaning is what captivates audiences. What undoes, or makes, a person. Williamson bravely centres his female lead as a heroine, as strong as any in history or literature, who battles against the forces of the time, which seem to violate a woman’s very right to live and prosper.

In Kayla Hamill, he (and Director Tom Gutteridge) bring to our attention an actress on the cusp of fame. She scars the eye with her authentic rendering of vulnerable young Chrissie, conspired upon by evil forces, in the form both of people and events, who manages to emerge as a true survivor, with no bitterness. Her coming-of-age trial is excruciating to witness. There are few who seem to care and she is left to pick up her pieces after serial ruinations, remaking herself time and again. Hamill’s portrayal is searing, bold, courageous, and unforgettable. An actress of emotional depth, charisma, and skills, she will grace our stage and screens for many years.

The actors around her are top notch. Geoff Paine makes these father’s conflicts come to life, playing both working class and corporatised dads-in-personal crisis. Zachary Giles-Pidd as needy boyfriend Rick, and Nell Feeney as bourgeois mum Rosy, starkly enervate characters that seem flesh and blood, whether bogan or yuppie. The plot takes us to dark places, depicting drug use, child sex, family violence, gender abuses, prostitution, and the social expectations of the roles women are supposed to play.

After, Liz spoke about her early years with David, and he thankfully acknowledged the important role La Mama plays in in nurturing our dramatic future. His thanks are via this premiere.

– Sarah
Sarah W. is a dance-trained theatre lover with a flair for the bold and non-traditional performance. On the street or in the box seat, she looks for quality works that push the envelope.

Find out more on La Mama 50, the just-published book detailing the venue’s history.

Strong language and themes of drug-use, sex-work and violence.