In the dark cold of a Victorian prison, no one hears your cry. That was how it seemed for us, audience ‘inmates’, as we heard his searing lament on incarceration by famous 1895 convict, and literary giant, Oscar Wilde, in a singular showing of The Ballad Of Reading Gaol, inside The Old Melbourne Gaol. Adopting the proletarian ballad form, this is not a love song.

Wilde, sentenced to two years ‘hard labour’ for homosexual offences, was admitted to Reading Gaol in 1895. Five months after, Charles Wooldridge, a former Royal Horse Guard convicted of murdering his wife, was executed there by hanging, in 1896. On his release, Wilde recounted Wooldridge’s last days via an expose of a prisoner’s life.

On a winter’s night, we entered bluestone walls and paced worn flagstones and airless spaces where past captives had one dwelled, listening to Wilde’s j’accuse! ring loud in our very own version of his Victorian hell. Old Melbourne Gaol was the ultimate set for this angry poetry, the venue itself ‘performing’ – its design speaking of ritualised behavioural modification, bearing witness to Wilde’s truths over 100 years later. 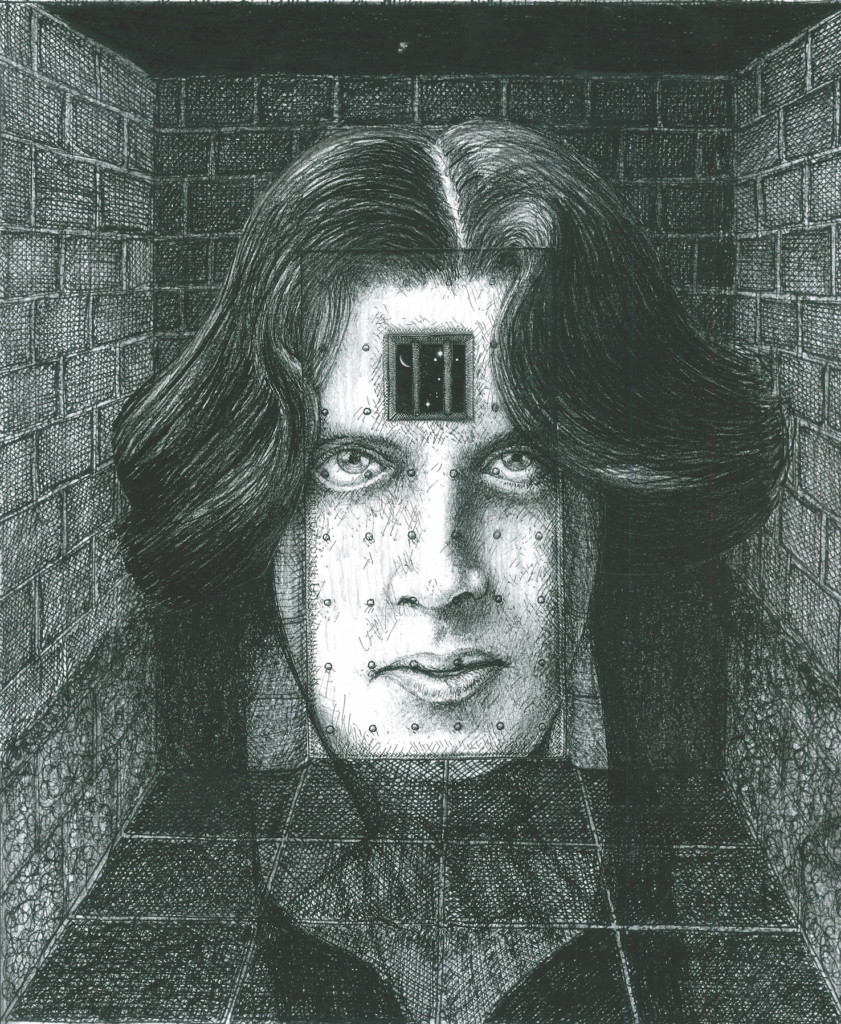 Wilde paints a picture in scarifying detail with his famous phrases –  that little tent of blue which prisoners call the sky; hangman’s hands; outcast men; he does not win who plays with sin; every prison that men build is built with bricks of shame – which hold an incantatory power equivalent to Macbeth’s lament on flawed humanity. At times bright and hopeful, others anguished and ghoulish, this is the ultimate gothic poetic musing on the penal code.

Four actors, two female, two male, in plain, unfashioned dress, recount Wooldridge’s tale in verse, perambulating like ghosts of former tenants. Their oration was songlike, honouring his war of words on propriety. They walked among us, then ran and galloped atop the walkways, revivifying this lived space whilst destabilising it with a prisoner’s protest. Green lighting gilded the mustard interior, casting a sickly pallor. Upper balconies were festooned with word sculptures by Phoenix the Street Artist, in oversized, cursive font, delineating his text large in our mind. Their storytelling was seconded by live guitar performance whose amplification reinforced each heavy stanza.

Through Wilde’s verse, and visible about the Gaol, was prisoner ‘reformation’ through isolation, deprivation, and the degenerative timetable that was their day –  prayer, work, exercise and eating its few occupations. His cast include Governors, chaplains, warders, doctors, grave diggers, jurors, and fellow inmates, with each player turned over like a stone to be chiseled in his backwards glance. 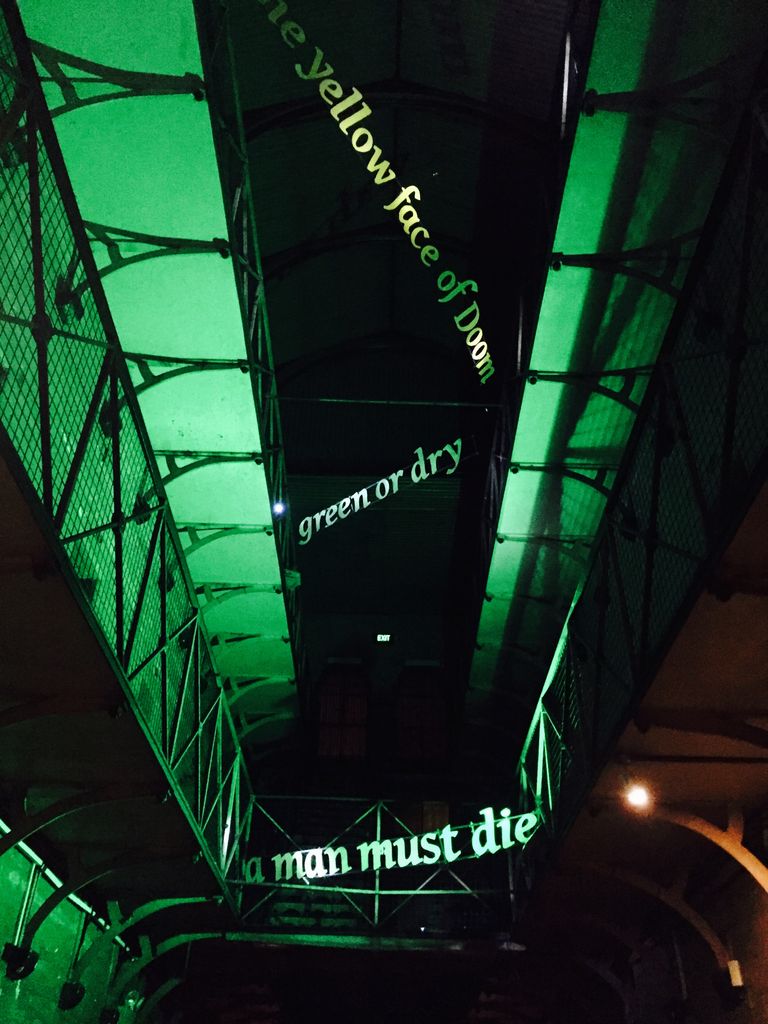 Post-show we inspected the relics of Victorian justice and the regalia of custodial life: giant padlocks, worn steps, cramped cells, death masks and protective gear restricting their spare time. The stuff he wrote proved not, then, fiction.

Wilde’s riposte hung dolefully in the air, haunting with its painful depiction as his ultimate condemnation of a failed society. All men kill the thing they love is not just about romantic tragedy. This performance showed prison life broke the spirit of men: to brutalise your own citizens, showed cruelty, not justice. For Wilde, this was a crime against humanity for which sentence in the spiritual realm could be the only possible atonement. A brave encounter with an impassioned work.

In 2017, Wilde was posthumously pardoned by the British government for his offence.

– Sarah
Sarah W. is a dance-trained theatre lover with a flair for the bold, and performance in unique forms and spaces. On the street or in the box seat, she looks for quality works that push the envelope, enlighten, and entertain.

The Ballad Of Reading Gaol showed Sunday 30 July, 8pm (60 mins) at The Old Melbourne Gaol. The venue is partly accessible.

Disclosure: The Plus Ones were guests of La Mama Theatre.
Image credit: Phoenix the Street Artist, Old Melbourne Gaol.

Indian Film Festival of Melbourne – The Plus Ones’ Guide