I have possibly the biggest sweet tooth in human history, or at least I thought I did before I walked into the sugar haven that was Good Food Month’s Sweetfest. Right from the inflatable ice cream cone at the door, I knew these guys were serious about their sweets.

Once I got inside North Melbourne’s Meat Market (such a savoury place for such a sugary event), I had a bit more of an idea of how the event worked – half the shed was a seated section with bar and stage, where talks were held by various folks throughout the days, and the other half was filled with sweet sweet-stalls (see what I did there?).

From Korean donuts to French macarons, with a Messina x  Big Gay Ice Cream collaboration thrown in the mix, there was literally something for everyone. Unless you were diabetic or on a diet, which might have been far less fun. 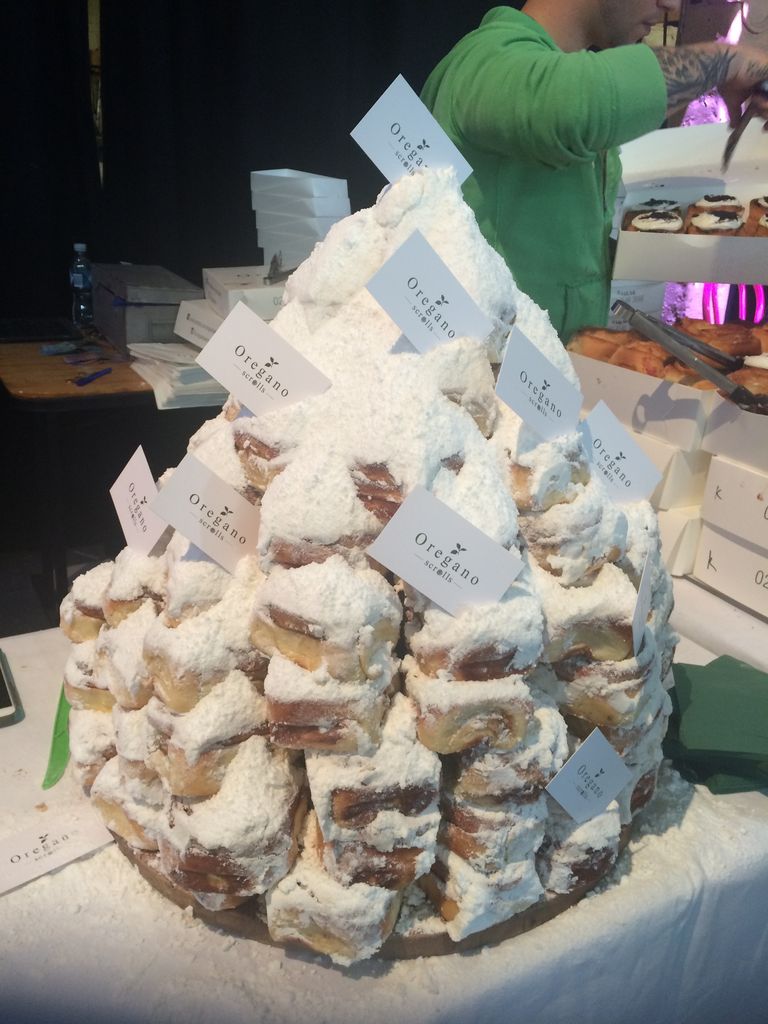 I’m not really a fan of events that charge entry fees for the honour of being able to spend more money on products inside, so my broke self was feeling a little empty pocketed and miserable until the boys from Oregano saw me lusting over their cinnamon scroll tower and bestowed a scroll unto me. They may have been doing this for everyone, but I choose to feel special. I wound up covered in a thin layer of icing sugar after devouring the scroll, and was still finding more in the hours afterwards. Who knew icing sugar and glitter were so similar.

I nabbed myself a seat and a glass of wine from Redbank Victoria and had the privilege of watching the lads from the U.S.’s Big Gay Ice Cream take to the stage for a caramelised bacon tutorial, opening with a warning to ‘gird your loins’. I’ve got to admit, their impassioned warnings against caramel burns had me a little scared to try it at home.

I have also become a true Melburnian: until this day I had never seen one of Naughty Boy’s #instashakes up close. I watched layer after layer of sugary goodness being piled on top of liquid sweetness and could instantly feel my dentist’s glare of shame.

Sweetfest was definitely a boutique event for those with a passion for both making and consuming sweet stuff, and even the smell alone made it worth hanging round North Melbourne that day. Now I have one hell of a sugar hangover to deal with.

– Jasmin
Jasmin is a PR pro who designs stuff and writes words. You can find her at @jasmanna.

While Good Food Month may be over for another year, satiate your sweet tooth with an #instashake from Naughty Boy Cafe (499-501 Lygon St, Carlton), or at one of Messina‘s many branches.