Opera Australia sets ‘The Elixir of Love’ in the Australian outback in a fun, comical, and entertaining production.

Opera Victoria delivers the energy and subtleties of Donizetti’s score while an enchanting chemistry plays out between the performers, who sing and act beautifully in this uplifting operatic delight.

The story is about Nemorino, a poor sheep shearer who’s love-struck by Adina, a wealthy and beautiful sheila. She thinks him the fool and torments him with indifference. But when a travelling quack passes through town, peddling his tonics and potions, Nemorino gets just what he’s looking for: a (slow release) elixir that’ll make him irresistible to women. Look out Adina. Of course, the tonic doesn’t actually work, but a little placebo goes a long way with hilarious results.

Originally set in the 1830s, this production brings the audience to the Australian outback, circa 1915, at the brink of World War I. This is a challenge when everyone’s singing Italian, but they pull it off with overwhelming success, using surtitles of true-blue Aussie vernacular and a charming abundance of corrugated iron – the entire set and all the animals (cows, sheep, dogs, horses, galahs) are made from it. 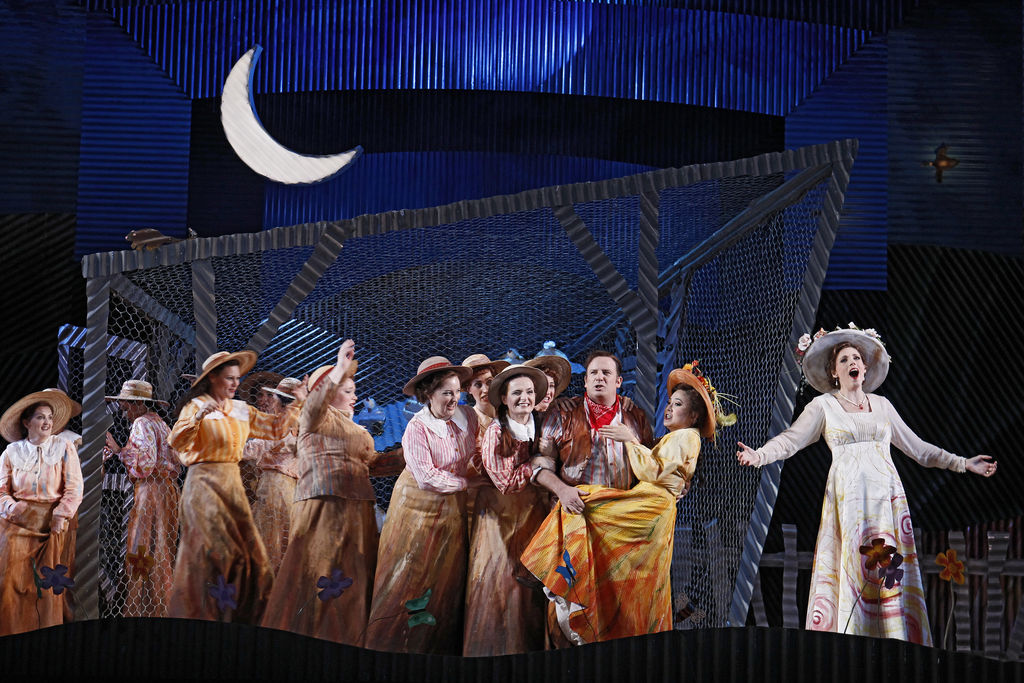 Let’s not forget the music. Usually when half a dozen people talk at the same time, you hear noise; but in opera, the resulting harmony elevates you. Most of Donizetti’s score is cheery and upbeat, and matched by the sharp and witty libretto. The highlight, of course, is Nemorino’s Una furtiva lagrima (‘A furtive tear’), sung superbly by Aldo Di Toro – a moving interlude, full of longing and emotion.

The cast really seem to enjoy themselves, and their enjoyment projects to the audience. Each performer creates a loveable character in fine voice, with satisfying comic timing.

In the nineteenth century, when there was no cinema or television, people went to the opera for entertainment. Unlike screens, which direct you where to look, the storytelling in an opera often involves dozens of performers on stage simultaneously, inviting you to become involved in a much wider canvas. This production is a visual feast that turns an old Italian classic into a wonderful Aussie yarn, with divine music and crowd-pleasing performances.

‘The Elixir of Love’ runs 21–28 November 2015 at the State Theatre, Melbourne (sung in Italian with Aussie surtitles). To find out more and book tickets, visit the Opera Australia website. The venue is wheelchair accessible.