Gilded Balloon Basement is an oft-forgotten secret, nestling snugly between Princess Street and George Street, and easily dismissed by visitors at first glance as a dimly lit backstreet.  And yet its home to a wide range of bars and restaurants, culminating, if you walk from East to West, the Gilded Balloon Basement. On Fridays and Saturdays this venue at the end of the street plays host to the GILDED BALLOON COMEDY SHOW.

I arrived on a chilly Saturday night, fortified from an enjoyable couple of hours in the neighbouring hostelries and eateries to be greeted by a very friendly staff who welcomed us into the cosy basement room, settling in for a good solid couple of hours entertainment.

First up, and appearing on stage between acts, was our compare Liam Withnail.  A natural performer, he developed a rapport with many of the audience, judging which ones were happy to banter with him and producing some spiky dialogue between MC and the public which ensued some hearty laughter and set the scene for the main acts appearing tonight. 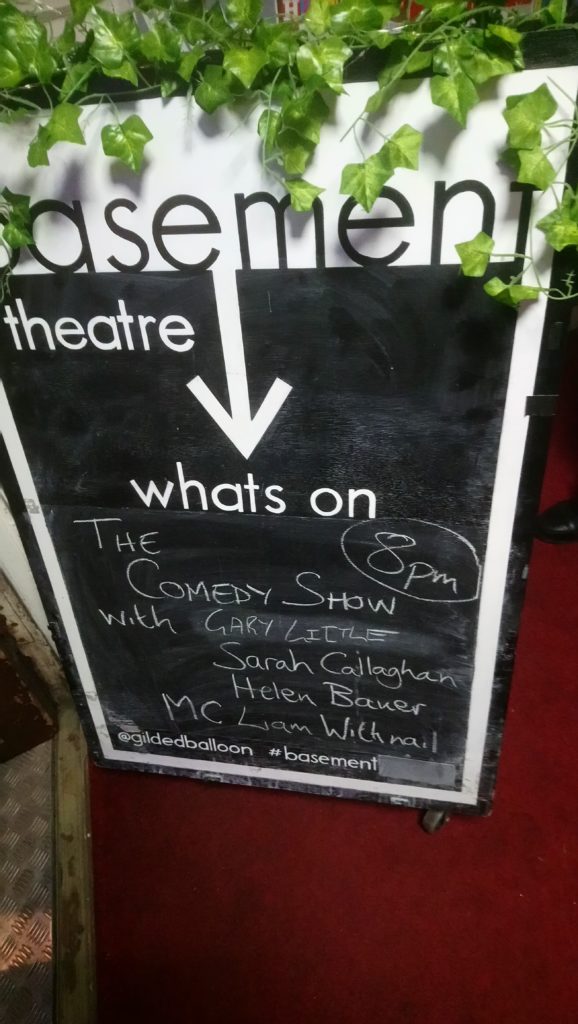 We then had two female comedians up to entertain us, Helen Bauer and Sarah Callaghan.  Physically, and I’m not being rude here because Helen alludes to this during her act, Helen is a striking figure, standing at over 6 feet tall.  This enables her to deliver a powerfully aggressive performance with some abrasive repartee. Whilst diminutive in comparison Sarah has an equally punchy delivery, her wide-girl cockney patter very much enjoyed by the audience.

Gary Little headlined, a fiftysomething Glaswegian with patter around becoming a singleton on the Glasgow dating scene and some wonderfully crafted original observational humour concerning obscure American laws lit up the basement club and the laughter was deafening.    To be honest I’d never heard of Gary prior to this performance but he’s now on my radar, I really hope I can catch him again in the future.

My advice is:  Visit Rose Street.  It’s vast range of bars and eating establishment won’t disappoint and at this time of year the Christmas lights added to it offer a lovely festive note sitting perfectly alongside the typical Edinburgh dark wet winter sky.  Work your way down to the Rose Theatre, visit the Gilded Balloon, the friendly welcome and evenings entertainment will not disappoint.

To find out more and to book please visit: