Usually I silently curse pedestrians wandering around the city engrossed on their mobile phones to the extent they’ve blocked out the world around them.  However, after attending the event NIGHT WALK FOR EDINBURGH I am happy to concede that sometimes the handheld device can enhance your experience when walking around the capital.

Canadian artists Janet Cardiff and George Bures Miller have created film footage of a virtual tour around part of the historic old town which you then use as a sensory addition as you follow the route outlined on the video. 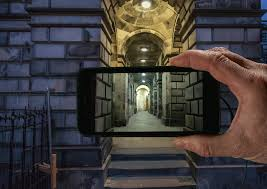 Beautifully filmed capturing Edinburgh on one if its kaleidoscopic early evening dusky evenings with the drizzle illuminated in the vivid colours we follow the narrator as she heads up the ancient steps of Advocates Close onto High Street, visiting the City Chambers, darting through alleyways to stop at the beautiful yet hidden city dwellings at Tron Court before wandering down the charismatic Cockburn Street with its slew of unique shops, bars, and eateries.

As you walk and follow the route on the screen a series of characters become momentarily alive as your world crosses with theirs and you receive a tantalisingly brief window into a stranger’s existence. Interspersed with music, dance poetry, famous quotations and even some contortionism at one stage. Overall a sensory overload which delivers you away from the life actually taking place around you and swallows you into the dreamy smallscreen world happening on the device you are holding. 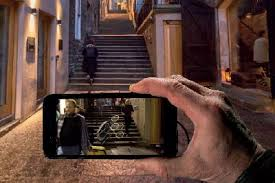 You are provided with the screen and headphones, headphones that are so powerful that all other sound is blocked out and only the sounds of the video city exist to you which creates confusion in your mind.  For example, you can hear a couple of joggers pounding towards you, so you instinctively move to the side of the alleyway only to see these joggers brush past on the video screen. At one stage we are following a lady on the screen whilst in reality I was following my partner, she was just a few seconds ahead of me on the tour, yet I found it difficult to compute the difference between fact and fiction.

For a surreal atmospheric tour around the City I suggest checking out NIGHT WALK FOR EDINBURGH, more information can be found at www.fruitmarket.co.uk / @fruitmarketgallery / #nightwalkforedinburgh