Having missed Rukahu at last year’s Fringe Festival, I jumped at the chance to review this new version of it – reformatted for a black box theatre.

Having lost their opening night to the combined effects of earthquakes and storms, James Nokise (and team) had used the time to develop some extra chaos for the show, and it was integrated so seamlessly you couldn’t tell what was new. 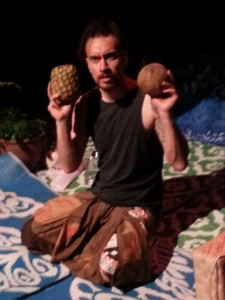 The show starts with Jon Bon Fasi (played by Nokise) greeting us in the foyer and proceeding to make us all tapu, as he is, by leading us in with a waiata.  Nokise has a commanding presence on stage and immediately has the audience eating out of the palm of his hands.  The stories of Bon Fasis’ journeys around the world as he is spending Creative New Zealand’s money and attempting to find the essence of Pasifika are utterly delightful.  Excellent use is made of lighting and props, which along with Nokise’s genius ability to subtly infuse the stories with references to recent events (including some unexpected thumping from upstairs) creates a familial feeling of classic pub tales.  Everyone in the room was completely engaged and continual laughs were had.

Towards the end Bon Fasi abruptly shifts in his tone to first one of contemplation around ‘what is Pasifika’ to a soliloquy on the nature of funding decisions, colonisation, climate change and politics.  You could almost  feel the entire audience take a deep breath as they were confronted with some of the realities that they (and their ancestors) are responsible for.  There was a palpable silence as we all contemplated the enormity of his words.

This is what art should do – yes it should entertain, but it should also cause us to challenge our view of the world, get out of our safe little spaces and see things in a different way. This may be one of the best examples I have ever seen of this.

Dell – Loves live music, comedy, and science.  She is currently working on an exciting project combining all three.  You can follow her @cerebralnz

Disclosure: The Plus Ones were invited guests of James Nokise