My Plus One and I were fortunate enough to attend the opening night of the Show Me Shorts Film Festival, currently on at the Embassy Theatre and finishing the 26th of October. It is the leading international short film festival in New Zealand. The awards night was held in Auckland a few days prior, which turned out to be a fortunate twist for us in Wellington. The bill for the evening consisted of all the award winning films. We got the cream of the crop served up for us in one scoop.

We were particularly enthralled with the thought that went into the small details of the event. Our tickets, given on entry, were button badges featuring icon images from the festival. My plus one got a mouse and I got a house, which we later found out both featured in the kiwi horror Feeder. The pictures were then used as toppers on trays of cupcakes scattered around foyer. My Plus One assures me the vanilla ones tasted like ‘dreamy marshmellows’.  The highly contested cupcake/badge to find was the three grown men in a bathtub.  Sadly, I was too slow to nab one of them. 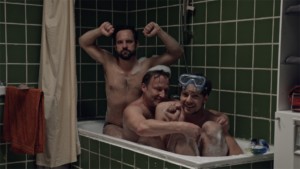 I liked that the Amazing Travelling Photo Booth was there too. My Plus One and I had heaps of fun donning animal masks and pulling funny faces. Each of us got a printed copy to take home. Just in case we need reminding of our imminent internet stardom with our own GIF.

Prior to the films starting, the Festival Director Gina Dellabarca welcomed us with a short speech. In this, I learnt the festival is also heading to Scott Base Antarctica this year (which blew my mind). In a mini-oscar moment, she also presented an award to Simon Baumfield.  He couldn’t be present at the Auckland ceremony. Through his acceptance speech you could tell his complete love for making cinema. It was touching to be able to share in his special moment.

The seven winning films, in and of themselves were outstanding. Each of them stood out for different reasons. Each of them were complete universes and stories in their own right. They covered pathos drama, tragedy, horror, comedy, music video and coming of age. A perfect mix for a night out.  Afterwards, we spent a long time debating the merits of each one. Neither of us could pick a clear favourite, they all were intriguing in their own way. This, I guess, is the appeal of a short film screening. You get a taste of everything and walk away feeling gratified from their diversity.

The Show Me Shorts Film Festival runs until Wednesday 26th October in Wellington. Screening sessions are grouped around the themes of He Tangata, Secrets & Lies, My Generation, Bump in the Night, Heartstrings and Homeland. The Final screening on the 26th of October will be the Audience Choice films, it will be a stellar evening to attend as well.

For those outside of Wellington, Show Me Shorts will be running in various locations around the country until 2 November and Antarctica 22 December – 2 January .

Disclosure: The Plus Ones were invited guests of Show Me Shorts