As we walked down Parliament Street to Airship37 last Thursday night, we could only imagine what awaited us down that entrance lane-way. From the moment we stepped onto the plush turf and headed through the garage doors to the lounge and the “hangar” we were definitely in the mood to polish down as many of the crazy name IPAs, Lagers and Ales they had brewing there, engulfed by the crafty mood created by North American Craft. 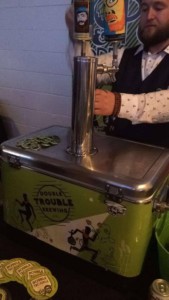 It’s craft beer after all and so beer drinkers alike were crowding around the stations inquiring about ingredients, wondering how long they have been in the biz, and most importantly getting their cup ready for the pour. So what would you expect the crowd to be like … urban hipsters in plaid shirts, beards, manbuns or just buns and braids?  Nope these drinkers were sporting more leather and khakis than usual for a craft beer symposium and they definitely knew the business of beer. Even chatting with a professional couple dressed in sleekly blacks, he & she took turns telling me what to smell when you enter one of these facilities and how prevalent each added ingredient is to the recipe. I personally enjoyed the chocolate variety as well as the chili mole additive. 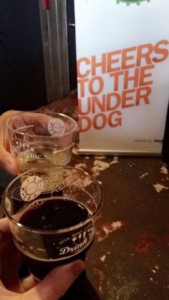 Speaking of, you couldn’t have a North American craft beer festival without a mariachi band and ole skool Mexican cartoons streaming and I heard the pulled pork tacos were to die for…it was CINCO de MAYO after all. Even though there were no Mexican varieties on hand to sample, I did like the added touch of the music, food and visuals making up for a day dedicated to Mexico’s revolutionary battle won on May 5… go figure!

But I think my plus one and I had the most incredible chat (over a dark brew of course) when sitting in the AirStream motor coach bus situated in the patio.This silver bullet provided some comfy seating and if you needed to have a moment it could provide that too.

The venue showed a great turn up whilst no one had to suffer queues, and allowing for ample opportunities to chat with a new friend or two. The sleeky-black couple totally dug the venue, being first timers and probably not last timers.
Clearly, unique spaces and themes are equally important as the bevvies. But with names like Smutty Nose, Octopus, and Hops & Robbers, the names are getting more craftier than the beers!

– Jacob
Jacob Lolarga is an event marketing manager, emcee & cultural explorer … when he’s not running around town keeping up his event socialite status, he can be found planning his next #yolo adventure.

Disclosure: The Plus Ones were invited guests of Katie Barbisan of Drink Inc Events.
Photo credit: Jessica Doutsas

The Mac and Cheese Festival at Ontario Place