The fact it was immersive was amusing. For those unfamiliar with the convention of immersive theatre, it simply means that the performance happens around you. The performance began with all audience members sitting on the ground or standing. This can be annoying as your view can be obstructed, but then nothing is stopping you from getting up and moving to another spot. The best part is watching people’s reactions. The room is lit for the majority of the performance so you can see everyone’s faces as easily as the performance. People gasp and giggle as they watched the performers wrestle or almost collide whist swinging from the ceiling. Even better was when audience members remained seated in the dance space and the performers tumbled around them — sometimes awkwardly hitting them, all as everyone else in the room is mentally telling them to get out of the way. 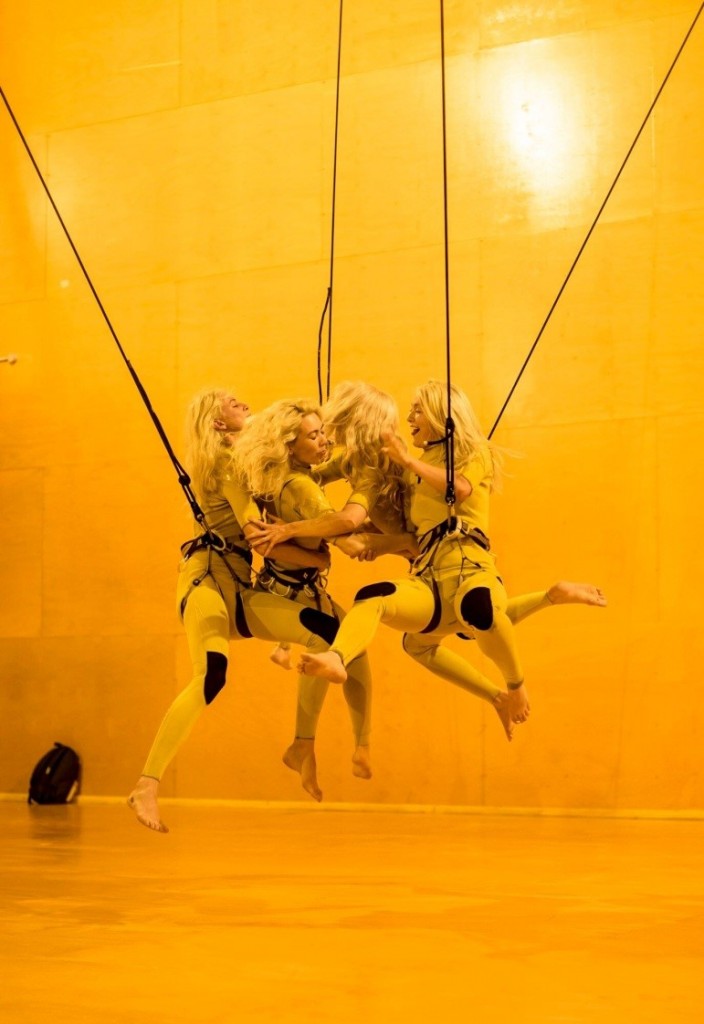 ‘Miss Universal’ had a few bells and whistles such as watching a metal welder through a florescent screen, and busting out LED lit hula-hoops. They were beautiful moments individually, but I wanted more. The wrestling mass of bodies lasted about 45 minutes — why can’t the hula-hoops be on stage for more than 10 minutes (and be used as hula-hoops instead of floor lighting?). However, in saying this I feel the non-conventional use of props is exactly what Eke is going for. Who determines how we use props? Or how we use our bodies? Eke is breaking the conventions of performance and making us question our own expectations.

I enjoyed the design concept by Claire Lambe. There is something a little uncanny about seeing four female dancers all with the same bleached blonde hair, in a yellow wooden room with yellow lighting. It gave off a very sickly vibe.

‘Miss Universal’ was an intersting show that I would recommend for people wishing to see something that pushes the boundaries of dance.

– Amber
Amber is a young theatremaker with a passion for sharing Melbourne’s best theatre with The Plus Ones community.

Disclosure: The Plus Ones were invited guests of Miranda Brown Publicity.

Schmucks Bagels, worth schlepping to the CBD for