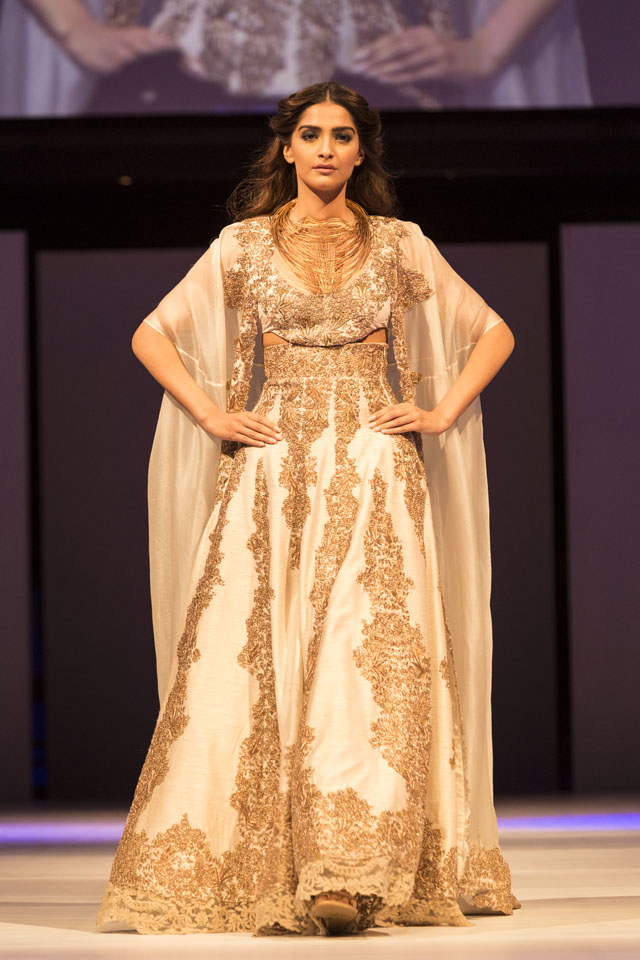 The Indian Film Festival Melbourne kicked off their two week celebration of Indian cinema with an awards night/fashion show that featured the appearance of some big names in Bollywood cinema (think Anil Kapoor of Slum Dog Millionaire fame) and some lavishly beautiful garments from the collections of Indian and Australian designers.

My plus one and I were greeted at the red carpet entrance by some stunningly attired musicians and dancers who ushered us in with flourishes of Bollywood style drumming and dancing to the NGV International, which was swarming with the glitterati of Indian film and fashion. We enjoyed some drinks and canapés whilst marvelling at the Indian fashion on silent auction, the proceeds of which we learned would be donated to the Royal Children’s Hospital.

Once we were full of chicken tikka nibbles and wine we happily bundled in to the main hall and enjoyed some catwalk presentations. We were wowed by Gaurav Gupta’s designs, evocative of wedding saris with a sleek modern cut and intricate beading reminiscent of a polygraph patterns. Richard Nylon (a milliner of note who will exhibit at the Melbourne Spring Fashion Week in a show entitled Feathering the Nest) showcased graceful designs, which called to mind the ethereal ambiance of the deep sea. Then there were Susan Dimasis‘ (of ‘Material By Product’ in Fitzroy) bold creations, followed by the most recent collection of Anamika Khanna who didn’t disappoint her fans with an abundance of sequins and characteristically intricate prints.

We also learned about the range of award-winning Indian films that we could enjoy in Melbourne over the coming week. I personally liked the look of the winner of the best indie film award Kaaka Muttai, the story of some kids on a mission to get their first taste of that marvellous food stuff: pizza! (Seriously, can’t blame them, it’s got all the essentials for even the most picky gormandise: bacon, cheese…all the major food groups. What more could you want?)

-Ruth Saxon
Ruth Saxon is an arts student who is currently busy establishing her accessories label in Melbourne after moving here from Perth (all roads…). She enjoys Pavlov’ing over fashion she couldn’t possibly hope to afford and sampling all that Melbourne has to offer in food and drink (and music and art…Melbourne huh!?)

The Plus Ones were invited guests of Lynda Buckley PR.