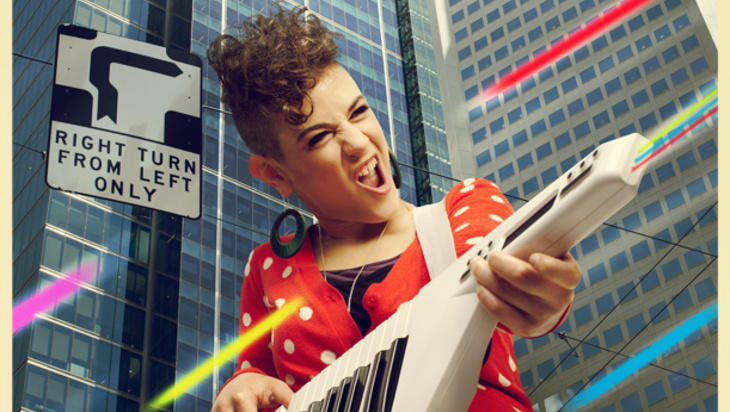 Jude Perl is a delight. Her Comedy Fest show, ‘Is it Just Me?‘ is a solid hour of why-isn’t-this-on-the-radio songs mixed with lighthearted standup.

The basement of The Butterfly Club (who knew there was a basement?) was sold out the night I went to see her, filled with eager comedy fans who love her style of comedy. Indeed, Jude is known on the comedy circuit in Melbourne. One Wednesday at the weekly standup at The Imperial Hotel, I was bemoaning the dearth of female standups on the night’s lineup. A male comic followed up with a list of the best women comedians in town, and Jude was among them. I can see why.

Jude is a mix between Tim Minchin and Katy Perry — her hilarious lyrics are sung to songs so catchy that I’m sure she’ll eventually start penning hit ballads for pop stars. They pack a punch, though: her first one was a tongue-in-cheek number about how she wants to be a pop star so people will listen to what she has to say, not what she looks like. There are more in that vein: about feminism, about dating, about life in 2015.

Her standup routines are interspersed with the songs, short stories about her life and all its embarrassments. She’s self-deprecating: ‘My accent is because I was born in America,’ she explained at one point, ‘not because I just got back from three months in L.A. and am a douche.’

Jude checks in with the audience to make sure we’re having a good time, and we always are. I could watch her sing for hours. And that fact she wears a dress made of breasts makes it all the funnier.

Jude Perl’s ‘Is It Just Me’ runs 7-19 April at The Butterfly Club.
The venue is not accessible.

Disclosure: The Plus Ones were invited guests of Jude Perl.