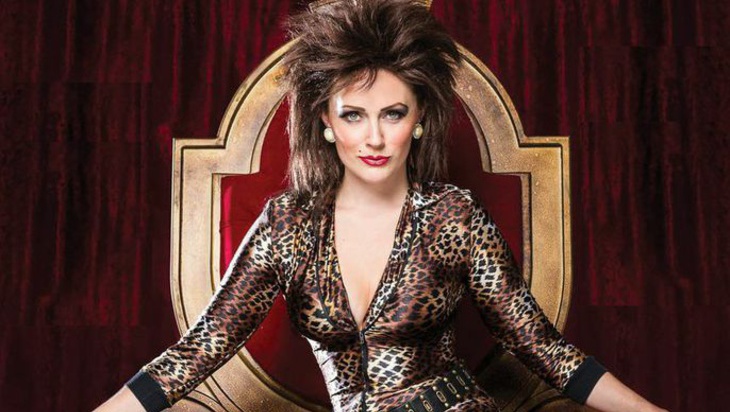 I love character pieces, and have a secret crush on cabaret shows. Marney McQueen’s ‘Hair to the Throne‘ is a wonderful combination of both. It follows the exploits of Rosa Waxoffski, a celebrity bikini waxer from Russia, as she provides musical evidence towards her Eurovision campaign alongside her pianist Boris Longschlongadongski. That one sentence says it all. It’s a marvelous character-driven musical spectacle that hits all aspects one could wish to experience from a cabaret setting: explosive songs, topical humour, graceful innuendo, and some superbly mastered interactions.

There seems to be a stigma with wanting to sit in the front row when it comes to a comedy show, usually in fear that you may be picked on. In this particular case there is nothing to be concerned about; all seats are prime targets for some fantastic interaction, and, for some lucky patrons, full participation. It is this aspect of the show that draws upon the comedy of you, the audience, reacting and contributing to the fun of the evening — and it is masterfully done. In fact, you may well feel disappointed upon not being selected rather than the other way around. The show has a splendid way of showcasing the talents of the performers, while also creating memorable characters within the audience itself.

Marney is clearly a well-adept character performer who knows how to expertly work and entertain a crowd. The range, commitment and grounding is very evident, which I especially noted when trying to ascertain whether the fantastic warm up act of Karen Barnes was actually the same person. The banter between Rosa and Boris (Mark Jones) is both sweet and humorously disturbing, adding a great dynamic to the show that undoubtedly delivers upon a enjoyable and ecstatic night out. Once you’ve witnessed the final number, you will be more than glad that you participated, whether passively or actively, in the hilarity of the evening. There are only a few shows left, so get in and see it for yourself.

Marney McQueen’s ‘Hair to the Throne’ runs 14-19 April at The Arts Centre.
The venue is accessible.