I’ve never travelled up Carlton Hill in the evening before, but the 360 degree view it afforded me of the Firth of Forth to the north and the beautiful lighting of Edinburgh City centre was worth the visit alone.  However, there was an added bonus to my trip, I was there to watch the ancient Celtic festival of SAMHUINN, which was recreated on the hill on the night of Halloween.

The festival is traced back some 600 years and was staged to symbolise the ending of summer and the commencing of winter.  So, the story goes, the ancient goddess the Cailleach appears in the form of a hare which distracts the Summer King who expects to see such animals in the spring time.  Lulled into a false sense of security the Cailleach transforms into an owl which alerts the King the end is nigh. A battle takes place between the forces of summer and winter with the King of Winter triumphantly revealed to the Cailleach. 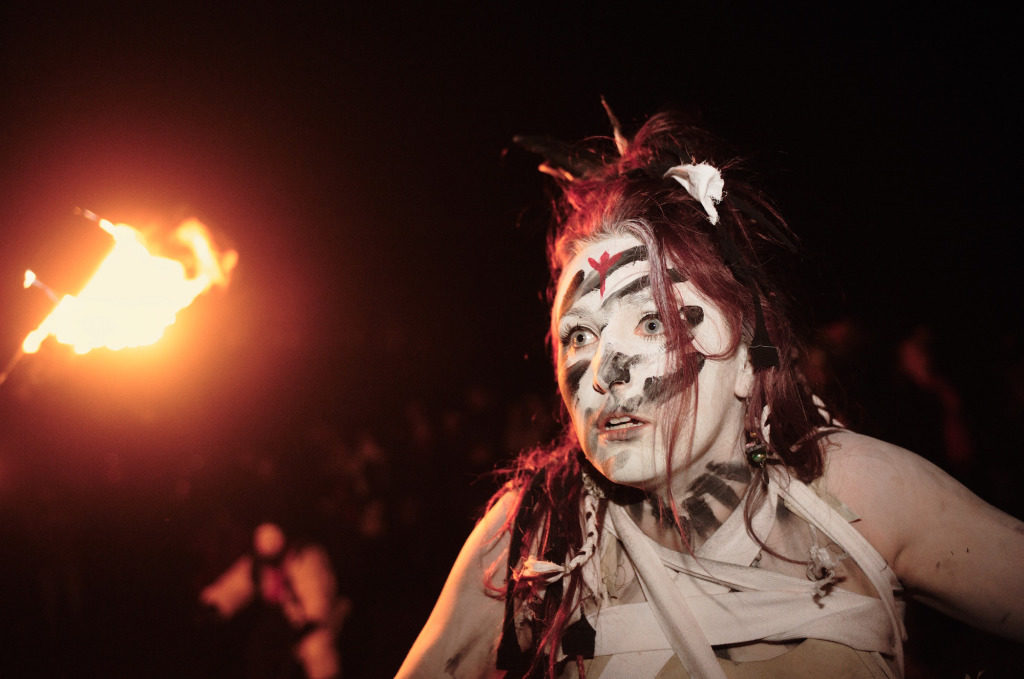 I got there early, and there was an eerily spooky vibe to the proceedings.  Hooded and caped hill dwellers moved threateningly and often undetected through the darkened fields.  I decided to repair to one of the many excellent food and drink caravans out of harm’s way.

Refreshed up I ventured down amongst the sell out crowd packing the fields to watch the performances taking place.  As there were often more than a couple ongoing simultaneously it was impossible to report on everything but the excitement was palpable.  I saw an enactment of the summer and winter hordes fighting rhythmically to the continual beat of the traditional drummers. The same hordes provided a unique vertigo defying series of gymnastic endeavours and human pyramids.  As I battled my way round a huge dancing skeleton I watched the final climax to the battle on stage before the Winter King and his hordes marched over to the burning pyre where the drumming (my partner claimed she could hear it a couple of miles away) continued loud and rhythmically into the night.

A typically Edinburgh one-off kind of evening and the reason why it is a unique and fascinating city.

Museum Of The Moon