If feelgood laughter about the birth of the Saviour is what you seek at this time of Yule, pop in to see ‘Christ Almighty!’. These eight twisted Nativity tales have it in spades. Think Monty Python but with a very Antipodean audacity and love of parading in undergarments.

A rotating cast of 22 actors from television, film, cabaret, and comedy give their all over eight nights and support fundraising to end homelessness in a co-production between Launch Housing and Bella Union.

Cheeky, irreverent, involving audience interaction, and occasionally R-rated, this slice of bawdry is a very 21st century rewrite of the people’s stories at the time of the birth of the Saviour in an ‘overcrowded Bethlehem’. 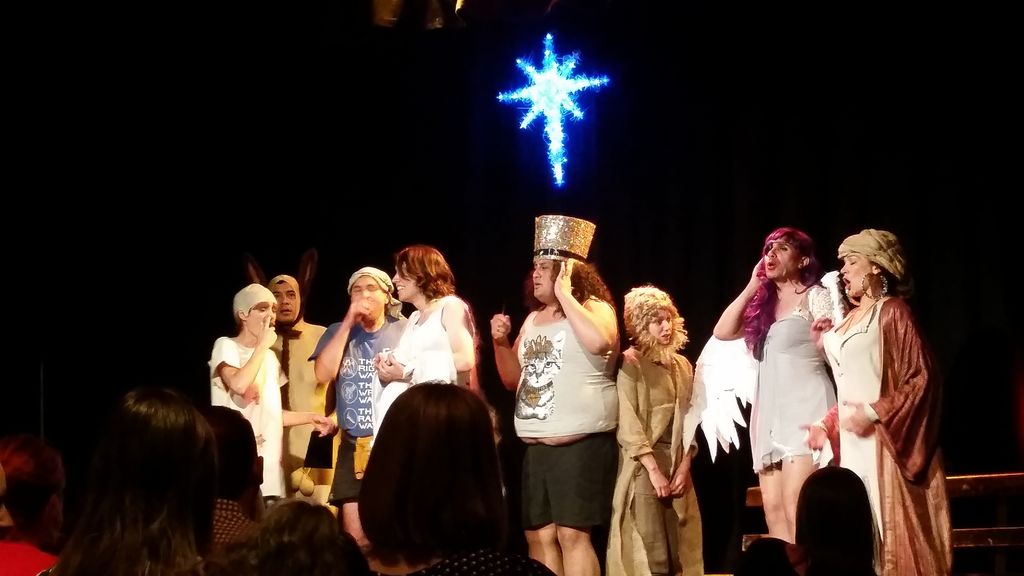 Eight Biblical characters romp their way across the stage revealing the backstories of the range of people supporting the birth of the Almighty – his BC crew. Who would ever have thought the Angel Gabrielle could be so baddass sexy, or that the donkey’s personal travails could figure in such close proximity to the arrival of our little Lord? Or that the Three Wise Men could be played in the body of one petite female?

King Herod’s love of KFC buckets and the hobbies of the wandering shepherd had the audience laughing till they fell off their seats. Grasp the basic facts of JC’s birth on earth while being witness to the messiness of human relations — religious or otherwise.

Come down and support a travelling band of troubadours, laugh at the story of the little baby Jesus and his homies, while donating some coin to help those in need in Melbourne at this merry time of year. We are one human family after all.

– Sarah
Sarah is a dance-trained theatre lover with a flair for the Shakespearean and non-traditional performance forums. On-the-street or in the box seat, she is always looking for works that push the envelope.
‘Christ Almighty!’ runs 28 November to 10 December 2015 at Bella Union in Carlton. Purchase tickets now. There’s also an artist’s silent auction, with 100% of proceeds donated to charity (drawn on closing night, 10 December).

Disclosure: The Plus Ones were invited guests of ‘Christ Almighty!’.