When the central character of a show is a talking fridge, you know that you’re not heading into conventional theatrical territory. However, sometimes it takes unusual plot devises to help us see afresh what has been played on stage many times before. Fred is Cold takes us on a journey of comedy and sadness to remind us of the value of human warmth. 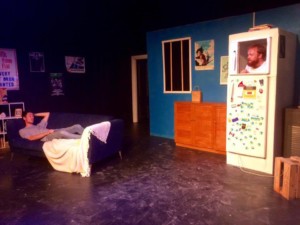 The setting is a familiar one of a dingy student flat. Movie posters lining the walls, beer crates used as stools, and the central feature of this play a magnet covered refrigerator that has seen far more glorious days. Fred the Fridge, played delightfully by Liam Kelly, is the first character that greets us and he charms us with his winsome manner. He invites us into his world of the flat where he stays year in and year out as tenants come and go.

The narrative shifts and suddenly we meet Sasha (Sylvie McCreanor) and Josh (Keegan Bragg), two young lovers dealing with life changing events. As always Fred is there and Fred watches on. It may seem on paper that having a static character is an awkward set-up. But Director Neenah Dekkers-Reihana plays with Fred’s immobility. She manages to sweep actors in and around the stage, pulling focus to them as needed, allowing Fred to become background furniture.

The play is interspersed with moments of fantasy, which allow the deeper themes to come to the front.  Fred’s hopes, fantasies, nightmares and deepest fears are played for us with a mix of Lip sync, horror montage, dance and (my favourite part) a rock ballad about milk. As these scenes became darker the tension between the actors during each vignette intensifies. And though my plus one may not admit she did, I ended up crying in the final scene, because I was so invested in the world of Josh and his talking fridge friend Fred.

I believe that this moment could only have been achieved by having a such a strong team on board. Ben Wilson’s writing style, including wicked one-liners, were played well by the cast. The design – from set choices through to lighting cues through to soundscape all added up and made layers of sense in this setting.  For a while I disappeared into a place where sentient appliances made a whole bunch of sense to me.

Disclosure: The Plus Ones were invited guests of Timeless Trash Productions