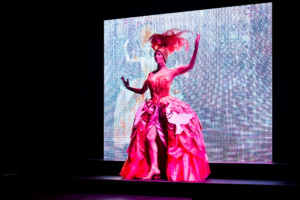 As we enter the Toi Whakaari hall we’re greeted by a fairy, an empress, and a purple monster in full fantasy armour. These are costumes crafted by past graduates, as the school celebrates ten years.

The Toi Whakaari showcase is more than a costume show. Students from all departments combine their efforts into a theatrical performance which includes dance routines, acting, costuming and management.

It was easy to get lost in the fantasy of the performances once the show begun. I felt like a child waiting in anticipation for what the next costume theme would be. My personal highlight was the elven fairy who danced across the floor while balancing a butterfly on one hand. My plus one fell for the fabulous rabbit who showered the audience with kisses and carrots. The audience cheered for the midway dance routine; the dancers wore dresses inspired by The Tardis from Doctor Who. I swooned at the adorable dresses worn for a bitter colonial dance, which ended with the women storming out. The costumes were fantastic pieces of craftsmanship on their own, and thanks to the performances they were alive, dramatic, and funny too.

The show whizzes by but packs a punch, with time to mingle for wine, photo opportunities, and questions with the performers. The actors all spoke highly of their costumes and were quick to strike a pose for anyone with a camera out. It was great to be able to geek out and ask a few technical questions of the designers too. The sense of achievement was infectious, and it was a lot of fun to share that with them.

The Toi Whakaari Showcase will bring a smile to any movie, theatre, or fantasy geek’s face.

Cerise
Cerise spends her day balancing hats at a software company. She is a serious geek for all things design, animation, and pancakes.

Toi Whakaari is New Zealands premiere performing arts school, specialising in many aspects of theatre and screen studies. You can follow them on their website,  Facebook and Twitter for details of their next public performances, workshops and application information.
Disclosure: The Plus Ones were invited guests of Toi Whakaari

Up and Coming Jewellery Showcase with The Makers

Live Comedy with a Sprinkling of Live Music – Rock’n’Lols