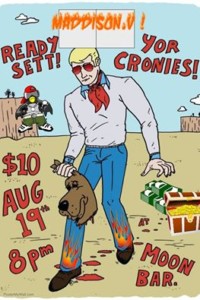 One of the neat things about Wellington is that the locals can’t stop forming bands and making music. The live performance scene might be intermeshed and incestuous but ultimately it’s a supportive community. Moon 1 in Newton is the perfect place to see this in action. I love slipping in to see which permutations of familiar faces are performing in new side projects.

This particular Friday, one of the billed acts had an accident, and Madison V was called in as replacement. Rarely seen live but filling in as opening act, it was brilliant to see members of the other bands sitting in the front row cheering the duo on. Comprising of a drum kit sent through messy sonic filters contrasted with folksy female singer/guitarist, Madison V was gentle and mesmerising.

Yor Cronies followed up with an energised, banter-filled set. Self-confessed as ‘Sad songs with happy chords’ the tongue-in-cheek lyrics of self-loathing never quite overwhelmed their exuberance of being onstage. Reminiscent of The Violent Femmes sound paired with the vocals of Laura Jane Grace (Against Me) this band has cemented their place on my fun-times radar. 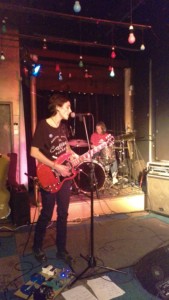 To cap the night off we had guitar-slingin’, drum-stompin’, beer-swiggin’ rock/indie duo Ready Sett. Comprised of guitarist Anj Barton, and new drummer Olivia Campion, these chicks rock! All toes were tapping, and the girl’s tunes got a sedate audience up and dancing. Anj’s deft use of delay plus pedal effects really supports her talent as both lead and rhythm guitarist. She makes it sound like there is a whole band up there. Olivia’s tightness lifts the game of this duo. This was their first live gig together and it was delightful to watch them interact as Anj jammed away on her solos. They have a great groove in these moments and I hope they start extending these solos in future shows.

Having the bands in the audience supporting each other made the gig cosy and friendly. I felt part of a crew. It was a warm hug I wore as a coat as I walked homewards in the cold winter night.

– Hilaire Carmody
Hilaire is art crazy, theatre crazy, dance crazy, music crazy, comedy crazy, people crazy and most importantly Wellington crazy. You can follow her @hilairec.
Moon 1 is Wellingtons hottest suburban venue, the pride of Newtown. Purveyors of gourmet pizza, craft beers & whiskies. You can follow them on  Facebook and Twitter for details of when they are next hosting live bands.

Disclosure: The Plus Ones were invited guests of Reddy Sett
Photo credit: Hilaire Carmody

Up and Coming Jewellery Showcase with The Makers