The Blacklight Comedy Club is a tickler for your cerebral functions. It’s a curated comedy show on the last Thursday of every month at Moon 1. As you enter, DJ Sci-FX is spinning his finest galactic tracks, setting the scene for the weird and wonderful to happen.

We are hosted by Jonny Potts – local comic, playwright and actor. To start we are greeted by his disembodied voice floating over the spacey music, what is this some kind of movie magic? As Jonny reveals himself, leaping out from behind a large speaker on the stage, we realise that if anything tonight is about being campy and kitsch.  Jonny is the regular MC and hand selects the line-up.  He likes to programme performers that bring a sense of playfulness and unexpectedness to a comedy gig. 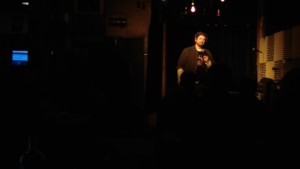 As we are introduced to this particular iteration of Blacklight Jonny reminds us this is a showcase of the “best and most interesting comedy in Wellington.” With the caveat “… but maybe not both at the same time.”  I become curious what are we in for?

What we end up with a is a big mix. To begin improvisor Jen O’Sullivan shares made-up ukulele love songs about homeless cats, Josh Davies jokes about string theory, Eamonn Marra muses on his ‘Bleetles’ T-shirt and Savannah Calton rounds off the first half with her Upper Hutt attitude. Sadly, a group of people leave in the break, turning what was a packed house into a dispersed audience.  This makes it hard for the following acts. Professorologist Sanjay Parbhu’s lecture on catching Pokémon, fails to hit the spot. Guru Rach shares her wordly knowledge for the soul, but the audience is more interested in finding spirituality in the bottom of a pint glass.  Finally, Ray O’Leary’s rants about death and ethics win the crowd back. But by now they are enraptured rather than laughing out loud.  Overall the show lives up to its promise of interesting performances. But the problem with interesting is that sometimes you get so engrossed in it, you forget to laugh out loud. Comedy is better when the audience is vocal.

– Hilaire Carmody
Hilaire is art crazy, theatre crazy, dance crazy, music crazy, comedy crazy, people crazy and most importantly Wellington crazy. You can follow her @hilairec.
Moon 1 is Wellingtons hottest suburban venue, the pride of Newtown. Purveyors of gourmet pizza, craft beers & whiskies. You can follow them on Facebook and Twitter. They host the Blacklight Comedy Club the last Thursday of every month.
Disclosure: The Plus Ones were invited guests of The Blacklight Comedy Club
Photo credit: Hilaire Carmody