After 30 years of being closed to the public, this monstrous encapsulating space sparks cultural energy with the catalyst event: the Luminato Festival (1-26 June). The Hearn Generating Station was once Canada’s largest enclosed structure, and is one of the most unique industrial landmarks in the world. Three times larger than the Tate Modern, the Statue of Liberty could lie down on her side comfortably in its quarters.

Leave it up to the Luminato Festival to kick start their 10th anniversary with a revamp after scooping up the Hearn last year to mark its place in Toronto’s art and culture scene. Luminato draws from local and international artists. It showcases multi-art disciplines from performance, visual art, music, theatre, dance, multi-media, and magic. The Hearn has returned to the Toronto landscape, situated in the developing and upcoming “Portlands District” on Lake Ontario, as the world’s largest cultural and community centre under one roof.

Unsound Toronto is the “music festival like no other.” It opened  Luminato with two nights of music and technology.  The Portlands is still under much planning as Toronto awaits its bid on World Expo and how to define this spectacular piece of real estate just south east of the downtown hub. So getting there is still a bit of a challenge, but following the Ubers, taxis, bike riders, and walkers down Cherry Street and Commissioners, you can’t help be fixated on the huge energy stack drawing you in. 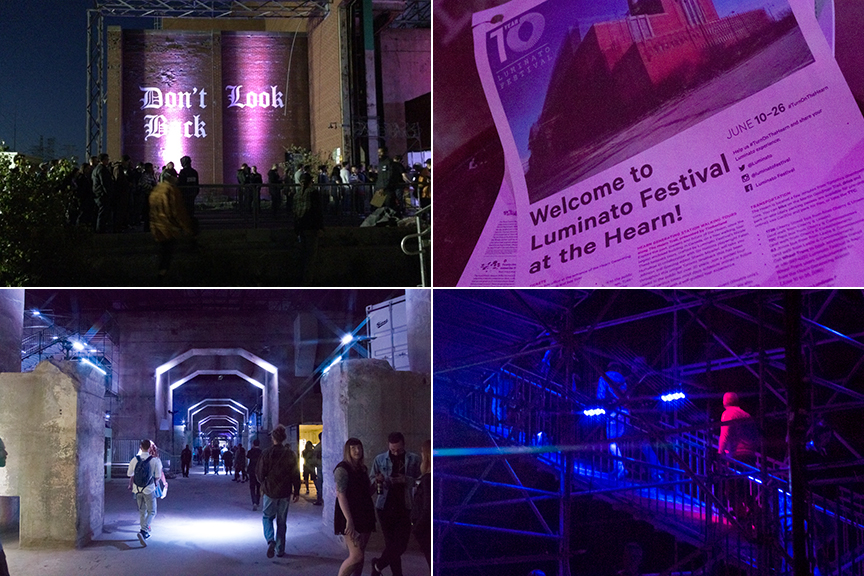 Situated in a very isolated area, the art aficionados (and not so artsy but curious architectural buffs) lined up outside the main entrance. Arriving earlier to the event, we were able to keep our energy up we walked through a huge hangar-like opening. On the way out though, the egress grew out towards the fields. All the extra bikes chained up against racks seem like a stand-alone art installation of its own. However, as we made it through security and ticketing, my mood of excitement and anxiety quickly changed to ambient and transient.

Walking through the station, the re-vamp seemed insignificant — much of the structure was left intact from 30 years ago. Besides the scaffolding and traffic barriers the space still felt a bit empty, even though thousands of people were sharing in the exact same experience. The main stage acoustics echoed throughout the building and the only lights that guided the eyes were from random spotlights that were part of vendor and supplier booths. There were some disco reflections off a massive installation called “One Thousand Speculations from Montreal artist Michel de Broin. You can’t help but wonder what this venue would be like during daytime, with the sun shining through the broken panes and solar windows above.

There were two stages, with artists throughout the evening. Most of the Unsound sounds came from the Music Stage but you could also catch performances in the Side Room. The featured artist for Friday was Sunn O))), known as the loudest band in the world from Seattle, so we definitely had our earplugs in tow. The line up of artists were certainly the mainstay for the event but as you explored the surrounding grounds of the plant, you were met with other forms of art. There was Absolut Vodka’s pillow lounge, part of a public Toronto art treasure exhibition entitled Trove, and a Toronto artist-run centre called Younger Than Beyoncé with their light fixtures. 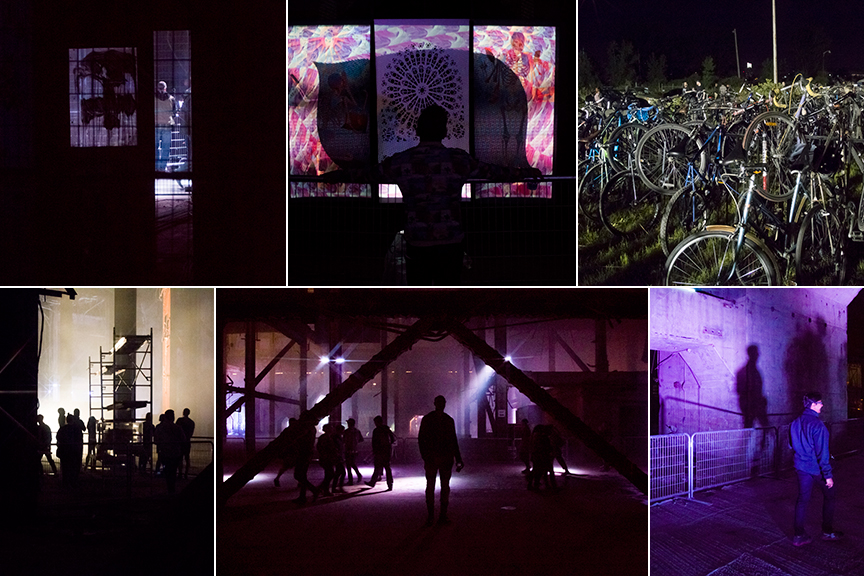 The crowds consisted of the Nuit Blanche variety, but there were also retirees to street artists to couples taking romantic strolls. I was captivated by how eclectic the experience was. My mind seemed to wander but could never quite focus. I felt a sense of adventure walking along the uneven concrete floors and around rusting iron pillars.

Luminato is one of the most pre-eminent international arts festivals in North America and has a impeccable reputation for showcasing Toronto’s displays of artistic expression. A decade later and finding residency in the Hearn, the festival runs for 26 days and will certainly enlighten, disturb, stimulate, and teach depending on your mood.

– Jacob
Jacob Lolarga is an event marketing manager, emcee, and cultural explorer. When he’s not running around town keeping up his event socialite status, he can be found planning his next #yolo adventure.

The 2016 Luminato Festival runs 1-26 June at the the Hearn Generating Station.

Disclosure: The Plus Ones were invited guests of Red Eye Media.
Photo credit: Beth Beard and DangerGirl Photography.

The Mac and Cheese Festival at Ontario Place