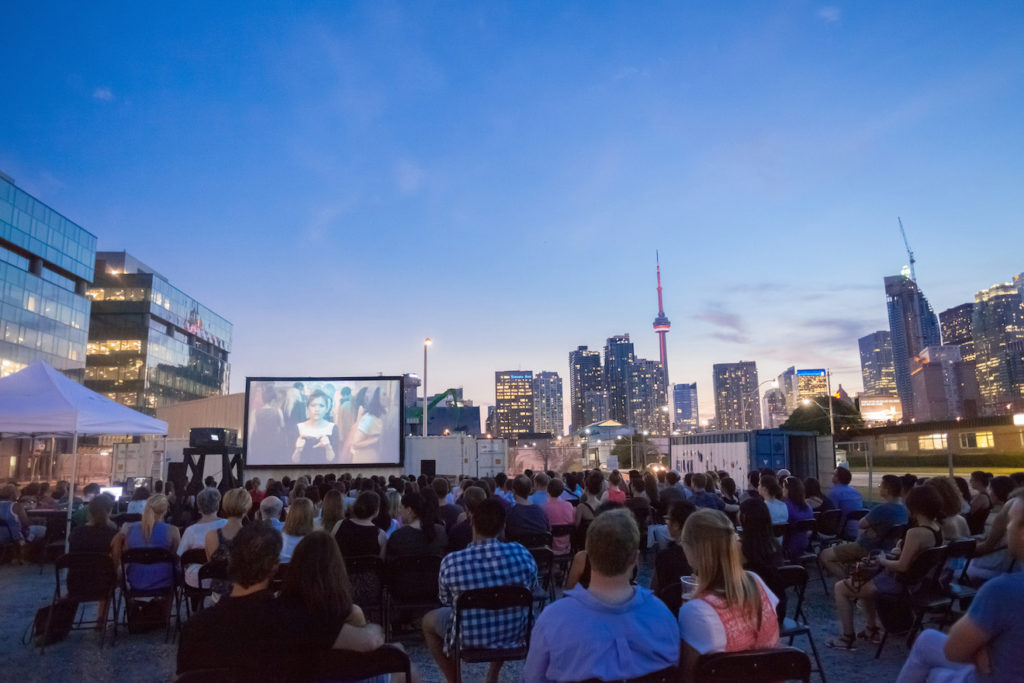 Open Roof Festival kicks off tonight, returning for its sixth summer in Toronto and ready to delight audiences with some al fresco entertainment. Be prepared for a suite of flicks of a wide range of genres including documentary, sci fi and horror as well as live music by emerging artists. Did we mention the food? Oh yeah. Each week there will be a new and special menu available on the night, which pairs nicely with beer by Amsterdam Brewery that you can also enjoy.

The event will run over ten weeks every Wednesday evening from June 17 through to August 19 at 99 Sudbury, just south of Queen St West and the Dovercourt neighbourhood.

Tickets are on sale now for $15 each and can be purchased through OpenRoofFestival.com.

Check out the line up for the 10 week festival…

Singer-songwriter and multi-instrumentalist Tomi Swick learned to play the bagpipes, military drums, piano and guitar by the age of 13. Swick brings his diverse act to the ORF stage and once the sun sets, Brett Morgan’s authorized documentary Kurt Cobain: Montage of Heck will shed some light on the late Kurt Cobain’s life. Using material for Cobain’s personal archives, the documentary, which earned rave reviews coming out of its world premiere at the Sundance Film Festival earlier this year, examines his music career, from his early days in Aberdeen, to his success and downfall with the grunge band Nirvana, until his untimely death.

Starting off the evening is the bluesy sound of the Southern Ontario band Del Bel. Then, travel from New Orleans to Los Angeles in The Overnight with Orange is the New Black star Taylor Schilling and Parks and Recreation alumni Adam Scott. In this 2015 Sundance Film Festival favourite from the Duplass brothers, find out what happens at a seemingly innocent playdate once the children are put to sleep. The screening at ORF will be the film’s Canadian premiere.

Influenced by Bruce Springsteen and Carole King, Guelph’s Sam Drysdale is one powerhouse performer that’s not to be missed. Performing songs from his debut EP The Fight, Sam has been compared to artists like John Mayer, Coldplay and City and Colour. Shortly after, enter a young programmer’s futuristic world in box office darling Ex Machina, as he participates in a breakthrough experiment in artificial intelligence by interacting with a beautiful female robot.

Toronto’s own country-folk songstress Jessica Mitchell kicks-off the night with her inviting melodies, followed by ORF’s first ever horror film screening— the critically acclaimed, breakout horror film of the year, It Follows. Centered on a young woman running away from an unknown supernatural force that follows her, the film debuted at the Cannes Film Festival in 2014 to rave reviews and has set the genre world on fire.

JULY 15
FILM: THE SANDWICH NAZI
BAND: ABDOMINAL AND THE OBLIQUES

Tonight will be anything but PG. We start the evening off with a performance by local Toronto rapper Abdominal and The Obliques, followed by a viewing of The Sandwich Nazi, a Canadian documentary straight from Toronto’s Hot Docs Film Festival and SXSW. Follow Vancouver sandwich maker Salam Kahil, whose delicatessen door warns customers about coarse language and nudity. A film that is equally hilarious as it is touching, Kahil finds a new family in his customers while reminiscing about his days as a male escort. ORF is especially excited to present this film by award-winning short filmmakers, presenting their very first feature film.

This lineup is entirely local. First up, Toronto’s own Hooded Fang. This indie rock band, formed in 2007, combines a jarring, angular guitar rock with acoustic instrumentals. Shortly after, fall in love with Benny and Jordan’s chance encounter in Canadian indie darling Pretend We’re Kissing. Set in Toronto, this witty romantic comedy is a reminder that a weekend romance, no matter how brief, can change us more than a longer romantic relationship.

After five years of fronting the indie-punk band Dead Letter Dept., Toronto’s Rob Moir will serenade the audience with passionate, simple and honest songs from his new project Rob Moir and The Great Lates. Then, meet the guidance counsellor at Grusin High— a boozing, drug-addled former child star becomes an improbable hit with his students by dispensing the worst advice possible in Guidance. Written and directed by Canadian actor Pat Mills, the film is a satirical spin on his own personal history as a child actor. Help ORF kick of the film’s theatrical run in Canada with this special screening!

Inspired by the New Orleans brass band tradition, the Heavyweights Brass Band stay true to the rich legacy of jazz but aren’t afraid to incorporate influences from different musical genres. From pop hits of the day to R&B and funk throwbacks, this performance will be anything but ordinary. The night continues with the breakout indie hit While We’re Young starring Ben Stiller, Naomi Watts, Amanda Seyfried and Adam Driver. The comedy-drama written and directed by Noah Baumbach, follows a middle-aged couple as their marriage and careers are overturned when a charming young couple enters their lives.

Get ready for a night of surprises. First up, Toronto’s own Os Tropies. This group of musicians and friends was brought together by their love of ‘Tropocalia – Brazilian pop music from the 60s. Get ready to groove as the Os sextet drops the trop at ORF. Shortly after, Unexpected, starring Vancouver-born How I Met Your Mother’s Cobie Smulders, rounds out the night. Set in Chicago, an inner-city high school teacher discovers she is pregnant at the same time as one of her most promising students, and the two develop an unlikely bond in this Sundance hit.

ORF is honored and excited to close the festival with both music and film starring Leah Fay of the band July Talk. The Toronto-based artist and musician will kick things off with her mix of alternative and indie rock style. Leah Fay will continue her presence after sundown with the screening of Diamond Tongues. In the film, Edith, played by Leah Fay, dreams of becoming a successful actress but just can’t seem to make things happen and when she can’t figure out why, she begins to do everything wrong.

Doors for all events open at 7:30pm with the musical act coming on shortly thereafter and the films commencing at sundown.

TO indulges in some conscious shopping