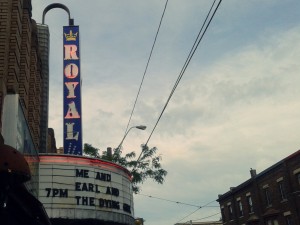 Would you spend a Monday evening queuing up outside one of Toronto’s most beloved cinemas for a free advanced screening of a Sundance winner? I did, with absolutely no regrets. The second instalment of NOW’s Free Flick Mondays happened last night at The Royal Cinema, attracting a good crowd of Torontonians for an advance screening of Me and Earl and the Dying Girl. A humorous on angle on the fragility of life from the perspective of three adolescents facing the new phase of adulthood. It was basically a funny version of The Fault in Our Stars, if you’re into that sort of thing.

Last night brought out lots of mum and daughter, husband and wives, pal dates, self dates, and heaps of first dates all ’round, … it was just one of those easy ways to spend a Monday without pulling out your debit card.

The first 100 patrons in queue received a selfie stick to promote the film (if you see it you’ll understand the significance) as well as free popcorn and pop. Now if that’s not a winning Monday I really don’t know what could be.

NOW’s Free Flick Mondays series is scheduled to continue monthly. Keep an eye out for the forthcoming one in July.

TO indulges in some conscious shopping