We’ve all heard of Attila the Hun, but few even amongst regular opera goers and classical music buffs know that there is an opera bearing his name. I for one am ready to admit that I hadn’t heard of Attila before I read Opera Australia’s announcement of their 2020 season productions. After last night’s triumph of a premiere, I cannot imagine how this gem has managed to lie unearthed by so many for so long.

First of all, it’s a Verdi – one of, if not the most renowned and popular of all opera composers. Secondly, it’s a collaboration of Verdi and librettist Solera – the killer duo that gave us all-time favourites Rigoletto and La Traviata. Thirdly, it’s a plain good opera, with a gripping story and exciting music.

Attila, the war-mongering King of the Huns, is trying to take over the world. He storms his way through Italy, rejecting proposals for peace and offers of alliance. He takes captive the beautiful and fiery Odabella, sparing her life out of respect for the manlike courage she shows. He is so impressed with her that he even gives her his own weapon. Odabella’s betrothed Foresto, on seeing her with Attila, dressed finely and clearly a favourite, accuses her of betrayal. Odabella, however, reveals with passion her plan to kill her captor out of vengeance for the murder of her father. With those dark motives she seeks to gain Attila’s trust by publicly foiling Foresto’s plot to kill him. She is rewarded with a marriage proposal by the grateful King, further angering the jealous Foresto. But Odabella’s blood flows cold and constant. The curtain closes on her killing Attila with the very weapon he gave her. 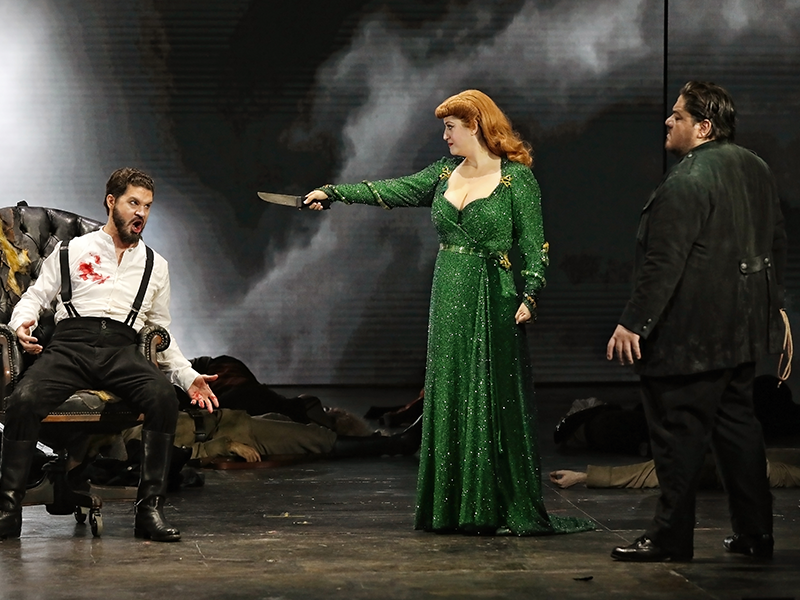 This brand new co-production by Opera Australia and Teatro alla Scala of Milan, one of the world’s greatest opera houses, is nothing short of impressive. The same creative team that brought Opera Australia into the digital age with 2018’s phenomenal new Aida has come together again to knock our socks off with another colossal affair. With Davide Livermore as director, Giò Forma on set design, Gianluca Falaschi on costumes and D-Wok on digital content, the philosophy is clearly once again, “more is more”.

Lavish physical sets of crumbling stone and iron megastructures combine with soaring cinema-sized LED screens. It is a seamless union of old and new. The digital work is mostly in black and white, lending the modern technology a traditional, almost vintage feel. Much of the time the slow-motion videos or near-still images projected onto the screens all but blend into the background, serving primarily to create atmosphere and perspective. But they create such intense atmosphere and such immense perspective that their presence is indispensable. In a couple of key scenes the videos come to the foreground and take on a storytelling role by picturing Odabella’s memories and Attila’s dream. Very. Effective. 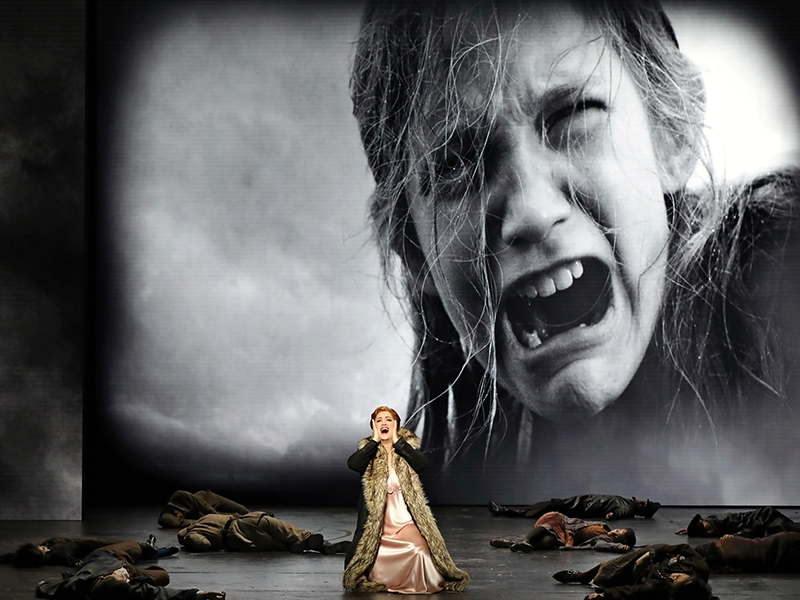 As if all this wasn’t huge enough, add to the mix heart-attack inducing gunshots, naked flames, and horses. Yes, you read correctly. Real, live, on-stage horses.

An interesting and successful directorial decision was to update the action from 5th century Italy to 1930s fascist Italy. Not only does this give the production a more relatable, contemporary feeling, it also speeds up the pace and amps up the energy with the introduction of guns and even a little touch of drag. The translation also stays true to the spirit of the original, as Verdi wrote Attila as a nationalistic call for Italy’s independence from Austria-Germany, something again very relevant and potent in the years leading up to WWII.

A stellar cast is led by the tall, masculine baritone Taras Berezhansky in the title role. Soprano Natalie Aroyan conquers the acrobatic vocal demands Verdi wrote into Odabella’s score. She does not waver, even in her opening two-octave runs, which she has to dive into without any easing in or warming up. Another extremely challenging vocal role is that of Foresto, which requires nothing less than the experience and talent of crowd favourite tenor Diego Torre. The Opera Australia Chorus and Opera Australia Orchestra stir up the crowd with a fast-paced, driving, military rhythm. This is by no means one of those slow,  long, drawn-out operas. I challenge anyone to fall asleep in their seat.

Attila is showing at The Joan Sutherland Theatre, Sydney Opera House, until March 28. Purchase tickets now. The venue is accessible.

Home Five O’Clock-tails: Bringing the bar to your kitchen